If you could describe the year 2010 in one word what would it be? 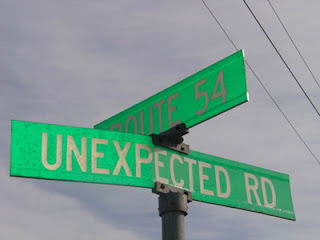 As I look back I am seeing ups and downs all of which are unexpected.  The ups and downs have not been unexpected but the outcome is.
What word would you use to describe 2010?
I am inclined to say it was a year that would be described by a positive word and not just a curious one however it doesn't fit all of them.   The positive that has come about has certainly come at a price but I have just done well at going with the flow and had help from my love when I was paying the price or when the going gots rough.
That I am fairly mellow these days and yet full of sass and as of today feel balanced.....unexpected.  Maybe because I ran 10 miles today and felt pretty good but maybe its because I am balancing life well.......unexpected.


Ryders winners are
Kovas @ Midwest Mulitsport Life (purple)
and
Leah @ Chasing Atlanta (white)
It turned out that they both chose differently so they get the choice in shades that they posted on comments.
Don't forget to sign up for my other giveaways and do check the sidebar for fellow bloggers giveaways too!

Hi there!
Yeah, and Yeah to both kovas and Leah! Both rockin' peeps!;-)

and love your reflections...;-)

I just saw that you are from Des Moines. I grew up in Omaha, NE so we were "neighbors"!

Congrats to Kovas and Leah

I love that about life...some of the best things that come from it are unexpected or unplanned for. Sounds like you've had a good year! 2010 has been filled with a lot of challenges that I've never faced before...my first running injury that kept me from running a marathon I trained SO hard for, adjusting to being a stay at home mom and giving up my job, feeling lost and unplugged in, etc. So my word would be "challenging" if I had to choose one. but I love how my challenges have all led to better and more wonderful things in my life! They have helped me grow and start new things (like my blog) that I would never have seen myself doing...unexpected things. :)

Love this. One word huh, I'll have to think on that. The first word that comes to mind is control, but I'll think and post Saturday. I love the "unexpected" post.

I think you were Hotz before, but that's just me. As a wise man once said, Expect the unexpected.

sometimes the unexpected things are the best. my one word 2010 - satisfying

Unexpected but all good!

I love that things in life, in general, is unexpected.

I love that all of your unexpected things turned out to be for the best. And balanced is a good place to be. One word is almost as hard as six!

Yay! Thank you so much. And congratulations on such an unexpected and successful year!