The adventure so far. Salina Kansas and Thanks Des Moines you were good to us.

Salina Kansas has been home to us for the last three weeks and hopefully we will be on the road to Washington later this week.  We are staying at my mother in laws house.  We packed up the van and left Des Moines with eagerness to leave and yet feeling grateful for the experiences we had there.

I gave birth to my youngest son Archimedes in the bedroom that I slept in the whole six years we lived there.  We had a beautiful backyard that we enjoyed in the spring and fall.  Jupiter, my son with autism,  was in some great programs and it was sad to say goodbye to the people that worked with and loved him.   We did not however mind saying goodbye to the evil mosquitos or the stifling humidity.

I stopped smoking in Des Moines and started running.  I ran a barefoot marathon as well as many other race distances.  I became a certified natural running coach and have made many new friends through the running community.  My Superhero husband and I enjoyed many miles running together.

I struggled with Multiple Sclerosis and Adrenal Fatigue and learned to recover through diet and exercise.  I learned to let go of my expectations of myself I had about running and fostered a passion for yoga.  A massive amount of growth can be marked by the passage of time spent in Des Moines Iowa.  But, when it became time to go, we decided to move to where we really wanted to.   A place with water and mountains.  A smaller town in a liberal state close enough to a big city and yet still far enough away from the big city life to feel the peace and calm of a small town.

We had a house all lined up to rent in Port Angeles.  The day we got to Salina I was contacted by the woman who manages the rental property saying how very sorry she was to have to tell us that we would not be able to rent the house.  It felt like a bomb was dropped.  The security deposit was sent back and we just brushed ourselves off and decided to go back to our original plan of camping while we look for a place to live,  of which there are a lot of rentals to choose from as well as it is the perfect time of year to camp in the mountains.

We got rid of a lot of stuff in Des Moines and only kept what we could pack in the van.  Its been a great lesson for all of us about not being attached to our stuff and no longer being defined by our things.  The boys are all adaptable and resilient but everyone misses having a schedule and a house of our own to be in.

The night before last we had some of our stuff stolen.  If it would have happened six months ago before I had already started letting go of stuff it would have felt much worse.   They stole a hard drive with a decades worth of photos and videos on it.   That hurts.  The loss is still raw and fresh and I look forward to when time has healed that wound a bit.   The rest of the stuff taken stung as they took some jewelry that had sentimental value.   Ah well.  What do you do?   I have to go with the flow and let the stressors just roll off my back.

We plan to be out of Salina, I have always called it Saliva and many people call it Vagina......hahaha....I digress, we hope to be out of here later this week.  Fingers and toes crossed that it  is a smooth departure.  I worry about the superhero wearing himself out working in the heat.  He also had issues with adrenal fatigue and one of the main reasons we chose Washington is to get away from the continental climate.   We have a house here that we co own with my mother in law and we want to sell and she wants to keep it so he is getting our stuff cleared out of there and getting it ready to hand over to her.  So, he has been working everyday for the last three weeks while I wrangle the boys.   My sister in law has been a huge help and we spend much time at her house as well.

I am still doing my #handstand365 challenge.  It has been incredibly humbling.  I still can't do much of a handstand for more than a few seconds but I am determined and being patient.  I am learning proper form by using a wall or tree or whatever I can to balance so I can take the time to align myself correctly.

My yoga practice has suffered through this move as well as the my weight has gone up .   I am 20 pounds heavier than I was this time last year.   That will have to change.  I knew it was coming during our very long move.   It is more important for me to have energy and get plenty of calories to deal with the four spawn in this stupid Kansas heat and still feel good at the end of the day and to do it day after day after day.   I have felt good and am proud of myself for that.   I am suspicious that there was something in Des Moines and more likely in our house that was affecting our health.

So, I am working on getting back into blogging again and doing yoga again daily.    I lost touch with the idea that a little bit is enough and better than none at all.   I learned that when large life changes come about I tend to pull back and isolate myself from the world.  Hence the blog silence for a while.  I am getting this whole temporary nomad thing down though and feel like I can get back to some of the things I love to do and that are so good for me. 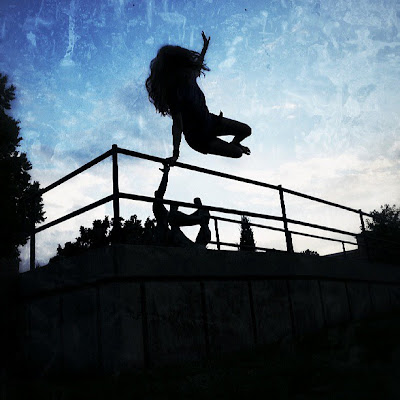 The teen spawn, my teen nephew, and I played with the light and sky and some mellow parkour at the public library.   The sky here in Kansas is freakin incredible!   I had forgotten how amazing the sky is here. 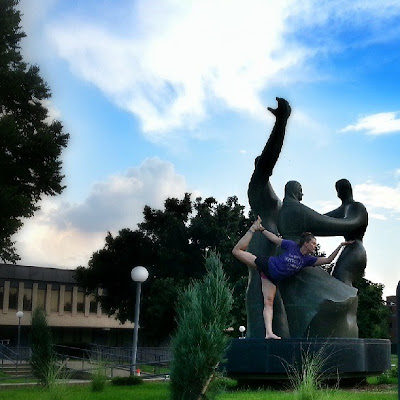 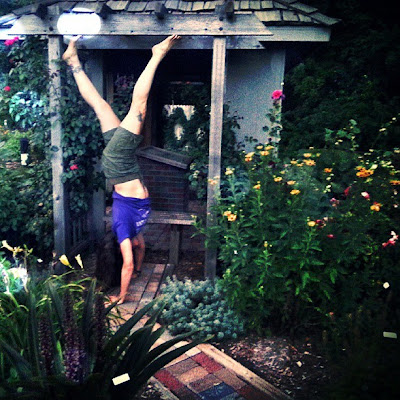 This is yesterdays Day 89 of #handstand365 in the little masters garden by the Kenwood cove pool here in Saliva!  Hips over shoulders over hands.  Engage the core and focus on those bandhas baby!

The adventure continues........I send out my love to each of you!

Thanks for the update, Angie!

Loved this. I wish you all the best in your move, girl.