Today was the end of an era.  When my two older spawn were very little the Superhero and I used to run bundle hauling paper routes.  It was so fun!  I drove around rural Kansas late at night while the boys slept and were young and bendy enough not to mind sleeping in the car.   I would drink coffee and listen to audio books and  drop off some paper bundles to other carriers while getting paid to do  what I pretty much did through much of high school minus the newspaper and getting pair part.   I saw the Aurora Borealis three times and countless other crazy shiznit on that paper route.  Storms and fires and a black bull trotting down them middle of the road and the only thing that kept me from hitting him was I saw the sway of his testicles  as the rest of him was as black as the night.  Funny but true!

For the time that we ran paper routes we drove Ford Festivas.  We have had a few of them.  My favorite has been the TARDIS blue old girl that we got rid of today after many years and a couple hundred thousand miles, on top of the 90,000 that was on her when we bought her.  Did I mention she got 43 miles to the gallon!

Back when my eyesight was better, Im not that old really, the Superhero and I were driving in rural Kansas checking out a house that his mom was raving about.   We spotted a bright blue car way off in the distance.  Jaymon said, "I would love to have that car" and my eagle eyes spotted the For Sale sign in the window.  The rest was history.

Years later I packed her to practically busting at the seams when the spawn and I first moved to Des Moines.  I was pregnant with Archimedes and the other three were so small still.   We made many trips back and forth to Kansas to visit Jaymon while he worked. 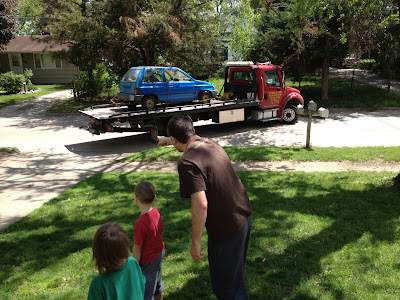 So today we said goodbye to her.  She was TARDIS blue, sexy, and bigger on the inside. (xoxo to my Whovian peeps who appreciate that) A new era has begun and the Iowa era is ending.   She represented being parents of very little spawn.  Now we have outgrown that part of our lives.  I don't have little children like that anymore.  They are gone and have been replaced with these strange older beings.  Equally charming spawn of course and full of interesting new thoughts but I am no longer a parent to little kids.  Granted Archimedes and Milo are still quite small but it feels different.  We have outgrown our old car and now our house too.  I knew it was coming but now its here.

I deal.  I mark the time and look forward to the next era.  Big adventures ahead.  I keep plugging away at the basic needs I have to meet.  I am learning about myself , sharing my story, and trying to spread some kindness and love.   Yoga helps me deal.

Today was Day 28 of the #handstand365.  I had fun practicing today!  I tried a one handed handstand and was shocked to discover that I could only hold it on my left side which is typically not my dominant side. 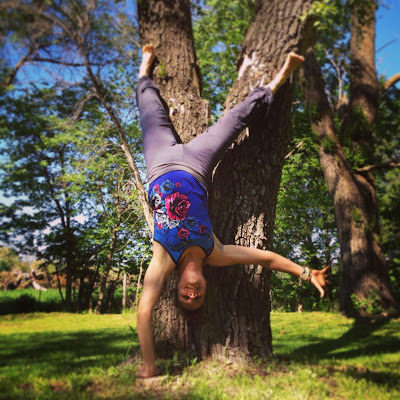 I also played with headstands again.  It gets me in touch with my core and transfers over to handstand practice well.  I had not tried these variations before today and was pleased that I didn't fall over!   These are part of seven variations of headstand in Ashtanga yoga. 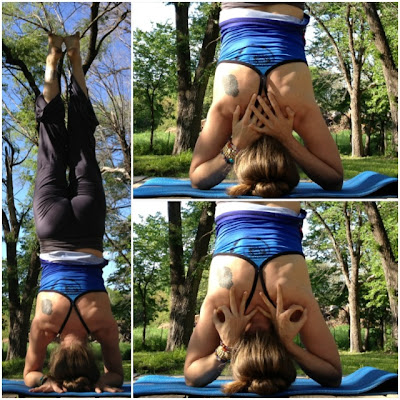 I also practiced my wheel pose.  Backbends are still quite hard for me.  I am strong in many ways but not so bendy in a lot of ways too.  I must say that I enjoy the journey to becoming more bendy.   I think my mind is becoming more flexible with my body.    I am able to keep my feet down now and my knees closer together and straighten my arms more.  Its getting there.   I can see in the picture that I need to lift my heart. 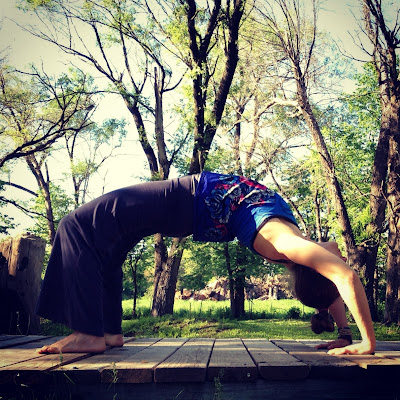 Remember that movie Spanglish?   I remember Adam Sandler's sandwich and Tea Leoni's yoga pose she did.  Both are quite memorable.  I thought that that pose was unattainable and defied all logic of how balance and gravity worked.  Funny how when you can do something you take it for granted a little bit even when consciously I try not to take it for granted. 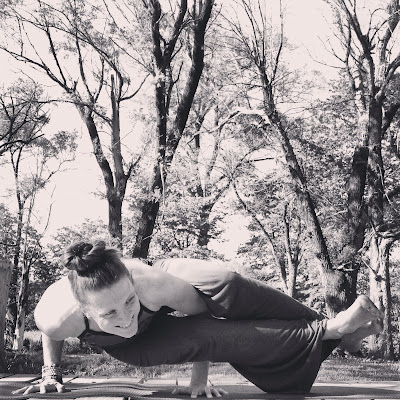 So, because its fun and I remember vividly thinking that I could never do something like that I practiced Astavakrasana.  It gets me back in touch with part of yoga that is full of wonder and self discovery for me even when I can do the pose.  I can do it but it still doesn't make sense that it can work.

I sent off a rental application today......fingers and toes crossed!

I'm still laughing at nearly hitting the big bull but seeing his testicles made you miss him! :)

Holy 1-hand handstand!!! So amazing and so awesome. I've been playing with the headstands too and have been having a lot of fun with them and surprising myself too. I just assumed that there was no way I could hold some of these variations but I have. I love watching your progress too with Wheel!!

True story Angela!! To make it funnier, he was right in the middle of the road and I was in the middle of no where. he was just trotting along and I couldn't get around him. I even threw things at him and he wouldn't move over so I had to just drive behind him until he turned down another road. Makes me laugh to remember :)

I am loving watching your progress too Christine! I remember when you were afraid of inversions and I remember and am still inspired by your facing your fears and doing them!!