Yoga. The building of a new foundation.

Today Le Husbandy said he appreciated all the yoga work I have been doing.   I know I am making progress although it had not occurred to me that he noticed until he mentioned it.  I suppose I assumed he did notice and part of me felt confident enough to not have cared if he did or not but these thoughts did not occur until in hindsight.    This is the kind of inner progress I was hoping for and yet it snuck up on me which upon reflection is a sign that its indeed growth. 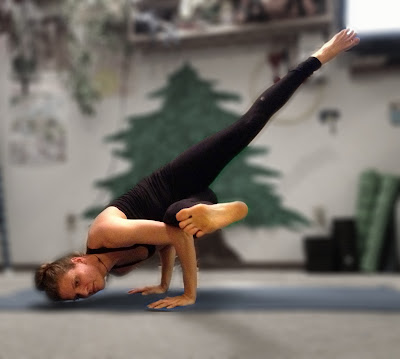 Running for me intensified my already stiff and inflexible state of being.   I held onto anger.  I made excuses for putting off self reflection and changing to be the person I needed to become in order to find happiness.  I tackled every obstacle with emotion driven intensity without regard for the consequences.

I stuffed my feelings in the back pocket of my proverbial running skirt and proceeded to ignore them with all my might.  All the while I was pretending to be healthy and happy far more often than I was and using the racking up of miles as proof.

The mind body connection was indeed at work and the stiffness that running caused bled into my psyche.  Running was not the cause of course but it was not allowing me to bend.  Instead I was breaking.

I had good intentions and a desire but no real game plan.  I would just run.  It would burn off some intensity and emotion but after a while I just couldn't run far enough to get away from myself and my body said ENOUGH! 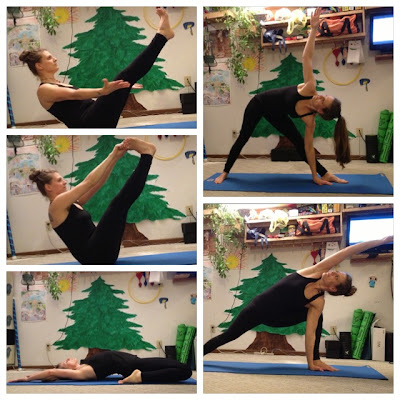 I believe that the body and mind are connected and my body is brilliant and wise where as my mind needed a bit of adjusting.   My body demanded I slow down and change.  I chose to listen, I didn't have much of a choice really I just chose to not fight it anymore. 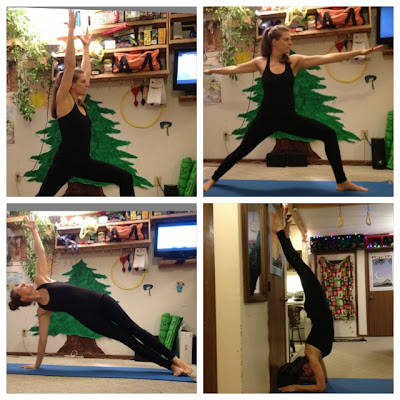 Like a kid again, I can move my body in ways that I haven't been able to move in decades and I do not see an end to this journey.  I like that it has no end.  There will never be the perfect pose or the perfect meditation session or the perfect run for that matter.  There is always more to look forward to.

Muscles and tendons are loosening up that have been bound very tightly and kept in that perpetual painful state by my infatuation with fixing myself with running.   What I have learned is that although running is lovely, I was using it for the wrong reasons.  I had good intentions but it was only scratching the surface.  It was a band-aide solution.

I am finding that yoga is the foundation that I was looking for.  It addresses the body, mind, spirit, and how I treat others in the world.  It is correcting the issues I created and intensified with running on all levels.   It is subtle but consistent change.

Its funny but its like that baseball movie....Field of Dreams.  "If you build it they will come."  With yoga if you do the asanas and focus on breathing and being open and calm the change will come.

Running ,and of course barefoot is still my favorite, will eventually supplement my yoga practice and not the other way around.  I used to do the occasional Sun Salutations but had zero concentration and very little desire to delve into a practice.  I just wanted to find a quick fix for my running aches and pains but alas there are not really quick fixes in yoga that I have found.   Its a process.

I have found that my experience with yoga this time around has been similar to when I ditched shoes and embraced barefoot running.   What I was doing wasn't working and I needed a clean slate.  I had to completely start over and let go of the miles I was running and go back to 1/4 mile runs but it was worth it to build a solid foundation and I progresses quickly when I put my focus onto establishing proper form as my foundation as well as a deeper love of what my body could do.  With barefoot running you get very much in touch with yourself and your surroundings due to the increased sensory input.  But changing that wasn't enough.  It ended up doing more harm than good after a while.  I was missing out on the benefits I had gotten a taste of.

I needed to change things about myself, of which are still a work in progress but running just wasn't the tool I needed to build the foundation for all of me.  I had to stop running for a while and go with a clean slate.  After many months of resting and struggling and fighting depression and downright daily feeling like shit,  I learned to let go.   Reprioritizing is what kept me afloat.

I started to miss moving my body.  Very slowly I began to do some yoga.  I started doing it because there wasn't anything else I could do.   I started with those Sun Salutations that I learned to do years ago when I first met the superhero.   Eventually I discovered that there is so much more to yoga than I thought there was.

Another discovery was that yoga is done barefoot.  This is obvious of course but being a runner and a barefoot runner who is living outside the conventional shoe box,  it didn't occur to me that others are already barefoot.  My thinking had become constrained and small.  I was thinking in regards to the barefoot and minimal shoe runners circles and not expanding to include so much more.   Barefoot running and yoga are two peas in a pod.

As I was moving my body in different asanas and flows today, it occurred to me that many of the old aches and pains and stiff and sore spots are gone.  Those muscles and tendons that could withstand miles and miles have been set free and I can move again like I could when I was a kid.  I have a fresher more positive outlook on life.   I am not as quick to anger and quicker to smile and feel compassion.

My foundation is being built on habits that will sustain me and when I do start to run more often I look forward to doing it again for the joy of it instead of my desperate attempt to escape and burn out emotions that needed to be faced.  I am facing my fears and  I will be able to just enjoy running and the movement and breath for what it is.  The simple act of propelling myself through time and space on my own two feet.  Nothing more, Nothing less.
Namaste

Fantastic article, I could totally identify with what you have said here. I am just at the starting point with my Yoga but feel it is an incredibly strong foundation for, well, everything! I know that this is what is going to help me with my barefoot running too, not that I run competitively in any way, I just really like doing it.
After doing a yoga for runners workshop on Saturday and I was talking with the teacher, Emma Spence-Goodier after and she explained to me that it was no wonder I found yoga as a barefooter, and essentially said what you have said. Which is that yoga and barefoot running are two peas in a pod.
Thank you for this great article.
Tray
Barefoot Britain

This echos the last two months of my life as I have discovered yoga and begun to leave running behind. I still enjoy the occasional run (especially barefoot this time of year in AZ) but have found that my 20s needed running and my 30s need yoga. Pretty sure my future 40 year old self will thank myself for making the change.