Today was just what I needed. Slushies and profundity.

Today was awesome.
It started out kinda glum.  My days have been like that lately.  I have been feeling rather lost and not sure what the point to my life is.  Of course being a wife and mother is what I love and what brings me happiness but there is a sense of forward movement that was missing.
Today I found that.
My oldest son Samson found a Comic Store Coffee Shop in Beaverdale that after he called them, wanted to take a look at some comics that Jaymon had given Sam.  Jaymon said that he could have them and see if he could make any money for them.
So off to Beaverdale we went.  Initially I was going to stay home with Jupiter but Jaymon said he was going to take all the boys and I thought  "fuck feeling tired and depressed, I am going and thats that".  And I did.

We went to the Comic book store. 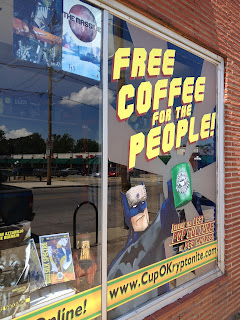 It was this really cool place with comfy couches and free coffee. 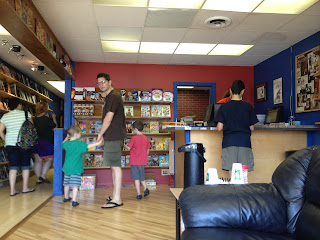 The guy looking at the comics was flipping through them so fast that I thought for sure that he wouldn't want them but in the end he took the whole lot of them and Sam made $45 smackers.  Sam is so awesome for taking the initiative and making this happen.  Clever fellow that one. 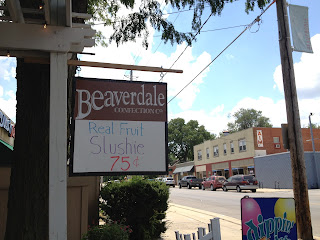 So as we were walking around we see this sign and decided to go into the sweet shop and check it out.  It was so cool.  We all sat around and drank our slushies and Jaymon and I laughed at Jupiter's ability to suck down the slushies.  He eats frozen fruit daily and has an ongoing battle with brain freeze so we think he has built up a tolerance.  He sucked down his own slushie and then was super cute and got Jaymon's slushie too all before we were done with ours. 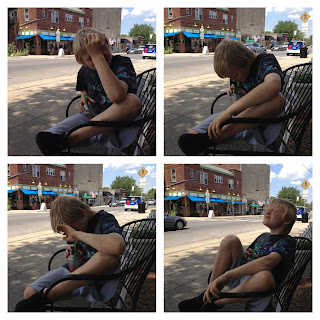 That kid cracks. me. up.  He powered through the pain and kept at that sweet goodness.
The laughter made me feel so good.  The weather was perfect, everyone was in good spirits.  No one was being a shit, which someone tends to have a problem when there are so many of us not a big deal but rare to have everyone super happy and fulfilled. Today was lovely. 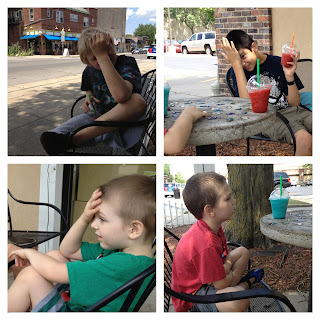 Everyone battled the brain freeze except for Milo and I got photos of it all. 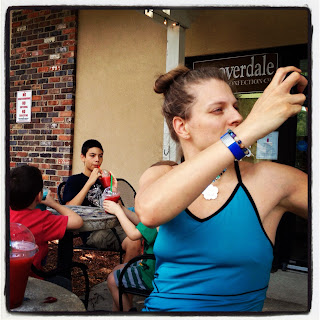 So fun to take pictures today. 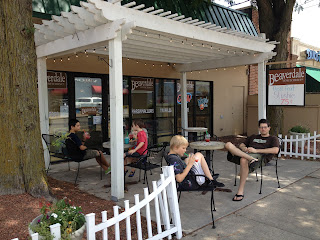 Really, it doesn't get better than this.
I may not always know what my "point" is but I know I am exactly where I want to be and that's with these people.  They experienced new things and listened to Jaymon and I talk. 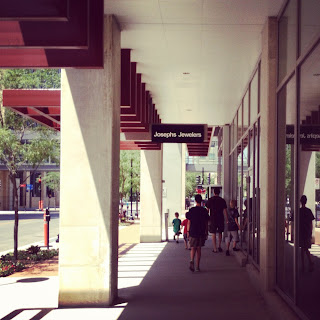 Afterwards we went downtown to Jaymon's dentist.  Jaymon had told me that the receptionist was hot for him but I just blew it off.   When we walked in, I actually felt bad for ruining her fantasy and at the same time felt fortunate that he was mine.  She is an older gal and quite fit looking and undoubtedly crushing on Jaymon. I hope she has someone.  She seems really nice although I might be a little afraid she might sabotage me if I went to that dentist.
When we got home I ate a lovely salad and finished reading Eat and Run.  I was feeling open and ready for inspiration and I found it.  Although I can find things lacking in the book, as in I wish there were more details,  I did find inspiration and a sense of commonality and a desire to better myself.  What more could one want in a book.

I will do a full and separate review but what I learned and remembered today is that I have indeed done great things and am capable of more.  Earlier in the week I was reading this book thinking that I will never get to do things like run a hundred miles.  I can't put the time into it as I won't take that time away from my other commitments.   It occurred to me today that Scott kept saying that it was in the pain and loneliness that we find peace and strength and an ultra marathon gives that to us.

I have had those moments and I recognized them for the profundity that they gave and I remember them.  I let them change me.   I had just lost sight of them.   Now I remember and look forward to goals ahead.  I also look forward to finding the joy in the moments, of which there are a whole hell of a lot more of them, in between the profound elation and sorrow.  I am tough and smart if I let myself be. 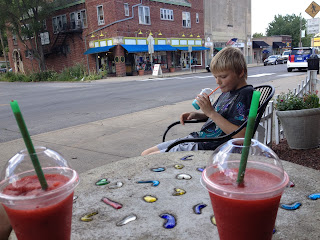 This is beautiful and exactly where I want to be.  There will be depression and someday there will be loss and who knows what will come but I am moving forward.  I am thinking, learning, changing, and doing my damndest to love and be loved.  Today was awesome.

Lovely post! I treasure great family moments like you had and always try to create plenty of them. I'm very lucky in that I'm always smiling and in a good mood. I'm known everywhere as the guy that always have a smile. :) Funny about the dentist receptionist! Have a great smiling day!

What a great day. I am totally in love with the fact that you went to see Jaymon's dentist crush. You probably distroyed her fantasy life!!
So glad you got out and enjoyed the day.

I read your blog often and I found it very sincere and interesting. I admire your positive attitude and how you are battling your affection and the fact that now you are getting into comics :-)