Barefoot running on gravel and flowers

Four wonderful miles out barefoot running with the superhero.  Its been hot here and we have been busy so not much running for the last week.   I have been happy for the most part but it hit me that I really love how relaxed I am when running. The feeling came at the top of a small hill when one would think it would be least pleasant.   Oh how much I needed that moment so I could refer back to it between now and my next run.  Its not just the act of running but the experience to think back on between runs.

Like I said its been quite warm here and I was aware that the heat has been taking its toll on me.  We don't like to run the AC very often and have lots of fans and keep the house opened up in the summer however it has been hot enough this last week being close to 100 that we have turned it on in the mornings when Jupiter has people over to come and work with him.   I kept the heat in mind and sure enough at about 4 miles I was feeling like I was roasting.  It was about 85 out but the roads were putting off the heat stored up from the day and I felt like I was cooking. 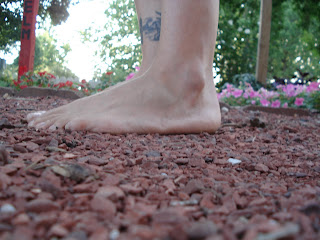 We have been watching the development at the masters garden at the fairgrounds and is where we go to chilax after our run there. 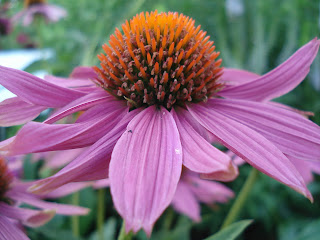 My lovely grandmother Margaret used to have five or so hummingbird feeders on her lanai and those little birds have always fascinated me. 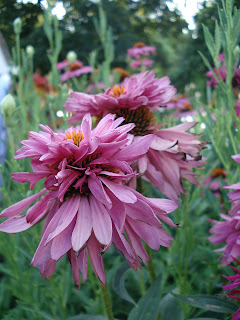 I tried to photograph the hummingbird but alas it was too quick for me.  The bumbus would not sit still either. 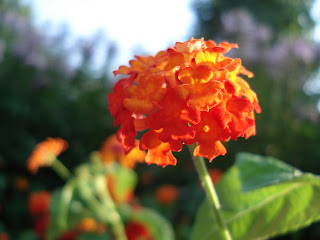 All of the honey bees were back at their hives this late in the day. 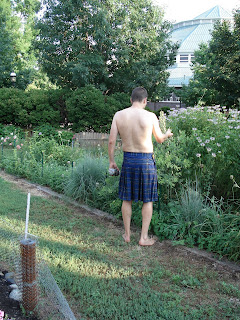 I did mange to snap this weird barefoot man mountain in a kilt though.  As we were walking to our car a minivan rolled by and took photos of us. Was it the barefeet or both of us in "skirts".  It was strange though.
Earlier someone else yelled out "nice skirt" in a twangy country accent referring to Jaymon's kilt.  That cemented the idea that indeed they were rubes.  It is so much quieter in the cemetery! 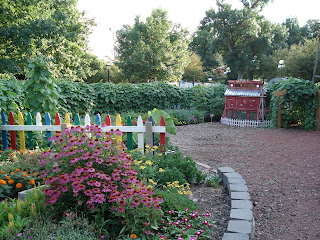 The fairgrounds are lovely and the interactions with the rest of the world wasn't unpleasant just odd.  A woman asked us why we were running barefoot and seemed interested although dubious which tends to be the normal experience.  Its a wonderful test of patience and reading others cues and deciding which approach to take with them.  I remember a couple of years ago the mild negativity would have eaten at me.  I am thankful to have grown past that for the most part.
Remember to "be" with confidence.  Believe you know what you are doing and who you are and you belong right where you are right now.  People sense that self assurance and you will fare well with others negativity or even their uncertainty.  You can inspire with just your presence. 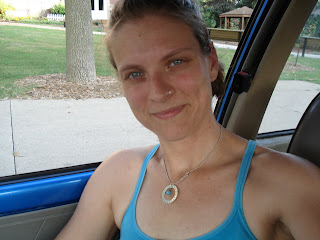 Now its time to kick back and relax.  Watching Kelly's Heros with the hubby.  I love this movie.
"Why don't you knock it off with them negative waves? Why don't you dig how beautiful it is out here? Why don't you say something righteous and hopeful for a change?"  ~Oddball~

So what do you say when people are being weird about your shoes or lack of them, your skirt, whatever?
How have you been faring with the heat?
Don't forget that I have an iFitness belt giveaway going on so go sign up for it!
Cheers,
AngieBee

since becoming a Mom of three people often like to comment when I am out with all the little ones....my favorite is "you have your hands full" in a condescending tone to my sweet girls who are typically well behaved....so I have just started to return, "blessed and happy to have my hands full, better than empty" it always takes people a minute!

"Remember to "be" with confidence. Believe you know what you are doing and who you are and you belong right where you are right now. People sense that self assurance and you will fare well with others negativity or even their uncertainty. You can inspire with just your presence." Wise words here Angie. As usual, you give me something to ponder and reflect on. This "being" with confidence has come slowly with me but I am so much more confident in not caring so much about what others say and think than ever before. Really does radiate some great energy when you just own who you are and embrace it.

I just accept the heat and take it easy. Plus warm Sunday mornings make barefooting more enjoyable for some reason!

I run on a rocky dirt road bf mostly. That gravel.. wow! I hear you on the heat. I'd love to not have the Ac blasting.. but my husband well. I still struggle with confidence in myself, geez how sad is that at my age!

I have been battling the heat here in Ontario. Was going to run yesterday, which was the hottest day so far, but gave up and went out for an ice cold beer at an air-conditioned restaurant. Like you we try not to run the a/c, but yesterday I gave in around 11 am and ran it for the day. I think the heat has broken now -- when I walked (barefoot) downtown for my coffee it was lovely out. Wish I was running, but can't as I'm swimming and biking today. I hope your hot weather breaks soon. I love the kilts, but can't get my man to wear one:)

Bah...people can cram it. I used to say stuff, but have found smiling and waving works just as well.

Yikes. Seems like a good time to wear some barefoot shoes for those hot roads!