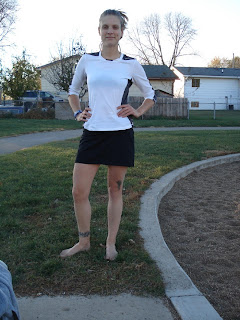 Now on this fine crisp fifth  day of November, I feel out of touch with the enormity of that goal now that it has been surpassed almost 2 months early.  I have averaged 100 miles per month.  Some months more and some less.  Through anemia and a new job and life in general I have kept at it.  It feels good to set out to do something and then get er' done!!  I am over-estimating that I ran about 50-75 miles in minimal shoes.

As I was running today I was considering what goals would be fitting for 2011.  Tentatively its going to be 1500.  Lets see if I can make 1200 by the end of this year and then decide for sure about 2011 but that would put me at around 30 miles per week.  Totally do-able yet challenging as well considering I have work,children, and other interests.
I love this time of year since it means scheming the 2011 race schedule.  Now that is always fun!  There is a trail marathon in April that I am considering in Lawrence KS on the way back home to visit..... 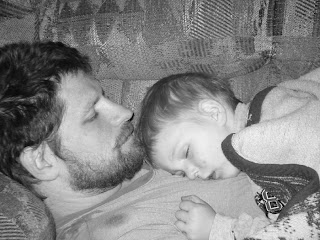 The littlest spawn is a bit under the weather and was so disheveled that he fell asleep on daddy.  I am working on hanging up those winter lights still as I smile about those 1004 miles so far!!  Have you started thinking of goals for 2011 yet?  I doubt that I am the only one.


Happy Running friends, oh and go check out the giveaways linked on my sidebar. There are some sweet ones right now!

great job mama. runnin goals for 2011 - how about relentless forward motion for 12 hours, without getting toes bitten by geese? ;-P

as for me - no big ones next year, 12 hours or less. after that... woo mommy - both my kids will be in school starting september 2011, no excuses not to get vastly faster and way more miles than i do now!!! can't wait!

I've been running on dirt and just got my confidence knocked down! I switched to pavement today and made it a whopping 4.5 miles!!!! Not to mention my pace is soo slow.. ugh this makes me want my shoes

Saw your facebook on a friends, and clicked through to the blog. Congrats on the 1000 miles, its a great way to keep getting out. I'm on my way again this year.

Congratulations on surpassing your 1000 mile goal already!! I'm with you on those 2011 plans... can't wait to get some important dates & goals on the calendar.

How inspiring!! Congrats on meeting your goal!

Yay for you! That is awesome!

Hi Angie Bee,
Congrats on the 1000 miles! Woo hoo...it is only November:) Awesome job! I still have a few more weeks of running before I will hit 1000.

The picture of your hubby and your son is precious:)

Congrats!! 1000 miles is a great accomplishment barefoot or not. Barefoot is just amazing!

Great job on those miles and more importantly giving that time to you (and often your family too). I don't think we ever stop needing reminded that taking some time for ourselves each day helps us be better for our families during all the other hours of the day.

Congrats on your 1000! It's amazing that it is almost completely barefoot as well! That and the new job, anemia... life in general! Way to go!