I ran to the top of the big hill in the cemetery this evening.  I managed 3.15 miles and was so happy to be out.  It had been a full week and a half of no running and the week before that was only 8 miles.  In hindsight it felt like much much longer than that.  The rest was good for me since I do feel stronger throughout my body although I just couldn't seem to get enough air and I did have a headache by the time I got home.

I ran with a sports bra and a skirt and no looking at my phone to see the time.
I missed how the wind feels drying my sweat and how the thick summer air holds the evergreen and fresh cut grass scents.
I missed feeling strong,capable, and healthy.
I have not taken any supplements yet although after today I think I want to. I want to speed up the process a bit. I have been eating more red meat and fruit high in vitamin C. (you have to have vitamin C to absorb the Iron) This includes tomatoes since they are high in C.  I have also been eating lots of hummus as chick peas and sesame seeds are both high in iron.  It is helping and I don't have the constant headaches that are presumably from lack of oxygen.  I also don't feel dizzy every time I stand up. At my worst it was dizziness anytime I changed my orientation at all.
I don't like eating more red meat and think that since I have tried that I really want to try more spinach and romaine.  It has taken a good two weeks of eating with my main focus being nutritionally dense foods high in iron.
I will not let this happen again.  I knew I wasn't getting enough iron but I still didn't make the moves to get more in my diet.  I had no idea it could get this bad and my case, as far as numbers go, was not the worst.  I could have gone so far as to had to have a blood transfusion if I didn't knock off not taking care of myself. I eat pretty healthy comparatively but I can still not get what I need if I become lazy about it.
So for now, the marathon is still on.  I will have to choose my training runs carefully but 10 weeks should be enough time. I don't have high expectations for my time so it will be a PR since it will be my first barefoot marathon.
I chose to run in the cemetery as it feels like an old friend.  I have been running there for 2 years now and have worked through many an issue while out there running.  I first started barefoot running there and trained for several races there.  Its peaceful and quiet and just creepy enough to keep most people away.
There is a grave there of a little girl who died when she was 10.  We share a middle name and I have a 10 year old that was also born in January. If I see flowers that have blown into the road I make sure and put them on her grave.  She was born in 1931 and died in 1941.  She would have been an old woman by now.  There is also Wolfkill and Starzinger to see on the way down the hill.
I haven't seen the crows in a while.  I wonder if they will still be around as much this fall. 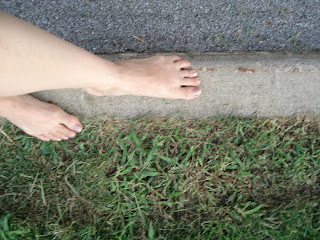 I love to run on the curb down the last half of the backside of the big hill in the cemetery. I don't think I could do it as nimbly in shoes and it certainly would not be as much fun. 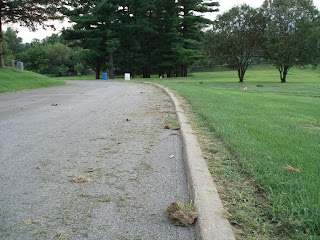 This is about halfway through running down the curb when I thought to take a picture.  I actually run on the curb and only tap the ground when I stumble maybe once or twice.  It reminds me of walking and trotting along the top of the fences on the horse farm as a kid.  We would spend hours walking the fences. The fences had a 3 sided wooden top to the fence to look nice as well as to cover up the sharp edges on the top.  They were about 6-8 inches wide.  I was a kid so I don't remember for sure though.
When I got home I ate some mixed berries, raisins, and 3 bean salad I made yesterday.  Oh and I drank a glass of banananuun!  That seemed to help with my headache the most. I hope everyone had wonderful runs or rests today!
I think tomorrow will be a running day for me as well.  I am behind 20 miles from July so I am going to try and catch up this month. So its 120 for a goal if I can pull it off safely.
Cheers all!
Oh yeah and there is another nuun giveaway coming up!! Its hot out there!

I'm so glad to read that you are on the mend and getting stronger every day. Keep it up, girl!

So glad you could get out there!!!

I'm so glad that you got out there. I know a few female runners now that have gone through what you are and it reminded me that I am aging (as if I didn't know that) and need to be careful about my nutritional intake - especially when I'm pushing mileage up. So, I am now taking an iron supplement too; there is too much at stake now not to be careful.

So glad you were able to run and felt pretty good! Continued good wishes to you in improving your iron levels!

that's great news about the marathon! Glad you're starting to feel better.

HOORAY!! I'm glad for you. My friend JP found out she was really anemic after the marathon we ran in December and that chica keeps running. She uses Floradix, an iron supplement that is more "natural-y" and has some Vit C as well.

im glad you got to run!

glad things are coming along for you and you got a great run in!

Yeah for getting stronger!

I love that you notice/get to know the headstones. I live next to two churchs, each has a cemetary. I have spent a lot of time there. I have lived in the same place my entire life (so far). The orignal church was built in 1831. I was just taking pictures of the older side of the cemetary. I find it so peaceful. Not a sad place at all but a place full of memories.

Yay hummus! I'm having that for lunch.

way to go! and i love running in cemeteries. they are so peaceful. is that strange? oh well. :)

Beautiful post, both touching and insightful, sorry you've been having a hard time, but glad to hear things are looking up.

Oh Angie,
I am so glad that you are feeling better and able to get out on runs! It sounds like you are doing well and taking in the right foods to help you with your energy. You look beautiful and happy:) Take care of yourself!

Happy you are feeling better. I love the pics.

Hi. I've been reading your blog for a while now. I've never run barefoot, but want to try it out. I find your blog very inspirational. Have you ever made a "green smoothie"? It's a delicious way to incorporate raw greens into your diet. Please look it up. You'll find hundreds of recipes. I started making them a year and a half ago and still eat them everyday for breakfast. All you need is a cheap blender. The key is to balance the amount of frozen & unfrozen fruits/veggies to achieve maximum smoothie-ness. Good luck in smoothie land and be well.

I'm so glad you got out and ran!