Today has been a lovely day.  It has been long coming too.
I checked off about a dozen things off my to do list and made some good starts on others.
It was a mixture of household, work, and things for Jupiter which are always satisfying.
Sweet stuff came in the mail today as well.  I asked Chocolate #9 if I could try their slo-burn energy gels and they sent me a whole box to try out.  GOOD STUFF!!  Its organic Agave nectar and chocolate. It tastes amazing and is not as thick as the other gels so goes down quite easily.  It is a low glycemic gel so no energy spikes and why its called a slo-burn.  More of a review of that to come but thought I would mention it.  I keep some gels and shot blocks in my bag for when we are out and Jaymon and I get low blood sugar and are getting grouchy!  A few shot blocks does the trick.  The Chocolate #9 are going in my bag too and I look forward to trying them out on a longer run.

After the chocolate arrival I had to make some phone calls. One of which I was not happy about. I was assertive with a family member that I don't like having confrontations with.  I tend to be too emotional and then my rational thinking shuts off like a light and its just not productive.  I was calm though and was able to stand my ground.
I also ran tonight!  I went a mile farther than yesterday.  It was fantastic!
It was a bit cooler although very high humidity.  There was a breeze  so my sweat dried and cooled me.  I took a handheld of nuun and did not have a headache nor do I now after the run. I did not eat for a couple of hours before the run so no heartburn or digestive issues. I had eaten well earlier so I wasn't feeling weak. 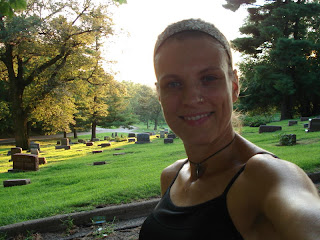 Its amazing how loud summer is. The cicada are almost deafening. I miss the sounds in winter when its quiet and everyone is inside although that can be peaceful too when it seems like you are the only one out in the world. Lawn mowers, people barbequeing with music going, car windows down so you can catch a glimpse of the song on their radio.  Summer is the best!

I run barefoot. Today I ran in a sports bra and skirt barefoot.  I am cool with this now and have come to believe that if people think I am weird then there is something wrong with them and their fashion sense.  That being said, when the shirtless skirt wearing  barefoot lady is laughing while running down the street and she is quite alone even I  concede that it is a bit odd.

Have you ever been driving and had to slam on your brakes to avoid hitting something that ran out in front of you?  About two seconds reality sets in and you realized that "Shake and Bake, That Just Happened" and you have no idea how you were able to hit the brakes so fast. It was faster than conscious thought.

I was charged by a dog today and the way time flowed was much like the scenario above.  My legs and feet hopped about dramatically and I did this jogging jig as she was charging my ankles.This blonde rat out of hell came out of nowhere.
Out of my mouth without my knowing I yell "HEY BACK OFF DOG" with a whole hell of a lot of sass.Like Uber sass and even finger pointing like it was one of my children.  A fraction of a second later I realize its an Italian Greyhound.   My mother in law has IGs and they are pretty cute little dogs.  They can change direction faster than any animal I have experienced.  That interaction was probably the most fun that blonde little cutie has had in a while. She charged and then as soon as I got nasty with her zipped back around with lightning speed. This happened in the space of like two seconds.
The fact that I yelled what I did without a care as to who heard me and the start it gave me brought on  the giggles. Crazy barefoot lady coming through. I have come to enjoy yelling at other peoples dogs that need scolding.

Now I am surrounded by one spawn growling and playing in the kitchen crawling about being scary and another practicing headstands on the couch. Jupiter is looking exhausted while watching his brothers.
Another wonderful day in the neighborhood :)
Happy Wednesday my friends!

I yell like that at dogs and it always seems to work. I think it's he loud noise that distracts them

Great post, I love your don't car attitude when you run, it's so postive and inspiring, I ran in just a bra top as well the other da,y as it was so hot, I just whipped my top off without thinking, and kept running, maybe running makes us fearless. Love the doggie story and your reaction, happy running.

I'm so happy to see you running and feeling good! Your positive approach through all of this has been inspiring!

I laugh a lot when I'm running,thinking.Sometimes cry too!
Liz Faz...

I appreciate your posts! And your awesome positivity! Hope there's another wonderful day tomorrow! :))

Nothing like a good summer day even if you have a confrontation with a family member. Seems nothing can bring you down.
Happy running.

I've been known to yell at the top of my lungs at dogs who chase me, but I do it more in hopes that the owners hear me yelling at their dog.

I agree with you how insanely loud the cicada's are. I had never heard such a thing before I moved to the Midwest. Some nights the sound just makes me crazy!

I have a friend who carries mace with her in case of dog encounters. Her husband is a police officer so she's armed :)

Sometimes I slip into mom mode too when I'm in the classroom. I've put up two fingers and told 17 year old boys...Ok, you have 2 choices! The funny thing is it works!

Glad you had a good run and are feeling a little better.

I'm putting you on dog patrol.

I catch myself laughing sometimes as well...I don't care what anyone thinks anymore.
Great...now I am going to be quoting Ricky Bobby all day.

The dog story made me giggle, I'm glad it backed off though, I love dogs but I wouldn't want one chasing me while I was running!

glad things are getting back to happy normal

A good run and chocolate in the mail, things ARE good!

Power to you on the sports bra running. I have yet to pull that off ;)

Start running naked and barefoot and laughing and see what happens. I really wish I could have seen you and that dog. He knew who was boss.

Glad you got a good run in :) I love summer running too, but I miss the cold of winter! Wish you could combine the best of both seasons :)

charged by a dog! good Lord! I'm gonna remember that 'BACK OFF DOG!' hope i have the sass to do so!

bliss! I shout at other people's dogs too. I have a big mean "GIT" that is super loud and bossy and it (thankfully...so far) works every time.

OMGosh I had my own comment then I read "Shut up and run's" loved that more than mine.

Shake and Bake?!? I've only heard our track coach use that term..
you look beautiful running! So beautiful, in fact, that a dog wanted to run with you. Then you laughed and it made for a great story...
I love reading this blog.

I am so glad that you're starting to feel better! I love the thought of you laughing away while running in just a skirt and bra.