Jaymon and I  decided out of nowhere to go for a run together!  He has been running barefoot on the treadmill for a while now and has a nice 3-4 mile base.  I grabbed my phone and Road ID, rocked some pigtails and we took off. 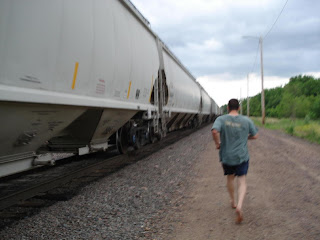 Of course on his first outside barefoot run with me we have to go around a train.  This road is brutal !  I am used to it and like it since I get to hop around and really have to concentrate on my foot falls but for a noobie, it must have hurt like mutha.  We doubled back a couple times on a paved road up ahead waiting for the train but decided to try a new route. 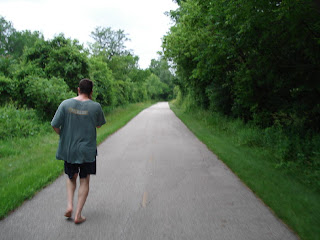 We ran on a bike trail close to Pleasant Hill. I had only been on this one in the winter and fall and did not realize how lush and green it is. In many areas it was like running in a tree tunnel.  We dashed between shadows and did several fartleks that had us both huffing and puffing.  His comfortable pace is quite fast and although I can keep up I do have to work at it. It was so good for me!! I can be a lazy ass and meander along and my mind wanders. He pushed me and I think I pushed him to keep going  farther too.

I have told him a few times that I think running with a friend would be wonderful. He has disagreed and thought that it would add complexity and that paces would not match up.  It turns out that he runs faster which motivates me and pushes me since I can keep up but am just not inclined to run that pace on my own.  Its nice for him that he doesn't have to worry about me being able to keep up so he can relax and just run.

His form looked great although we had to walk home the last mile or so due to some calf tightening. Its great that he knew when it was time to stop pushing so hard.  We ran 4.62 miles. I wish that I would have looked at the time when we left but I just went out the door and didn't even think of it.  He thought maybe he was getting blisters yet when we got home and showered and looked, there were none to be seen!
I am so stoked that he wants to make this a regular thing for us!  I have been longing to run with someone for a while now and how cool that the hubby is barefoot too! 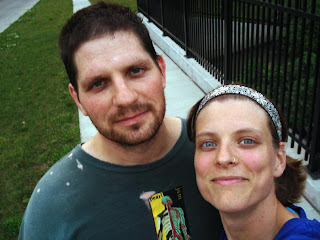 Here we are about a block from our house. He hates to pose for pics, but I am sure you can tell from the look of mere toleration on his mug!  (Hey brother of mine, do you remember that Pearl Jam t-shirt?)
So this makes a double for me!   I ran 7 this morning and then 4.62 with the hubby.  I am trying to cram a bunch of mile in the next few days before I work the Hy-Vee Triathlon spreading some nuun love. They are going to be some long hot days and I doubt I will have the energy to run and work even though it would be the best thing for stress busting.
Off to try and find Waynes World for the oldest spawn to watch. When walking back this evening, we were passed by a young hooligan jamming out to Bohemian Rhapsody. Seriously he was singing and headbanging, the whole bit. It made me laugh and want to share the craziness with the kid!
Cheers All !

Cool that he not only joined you, but is running barefoot too! Nice job on the doubles!

Thanks is so great that hubbs will run *barefoot* (bonus!) with you. I am jealous!

The things you don't know will be so important in a mate, huh?

...wow barefoot! Should I try? I did on the beach but not hard roads!

Well done to both!

That's great being able to share your passion, well done on convincing him to run with you,bonus points for getting him to run barefoot, glad you both had a good time.

Yeaahhhh I love hubby runs! DUDDEEE I totally ran barefoot last night...it was crazy!! I will post about it today! and link you in of course because you were the inspiration!

Awesome! The hubs and I 'run' together as well..well, we head out the door at the same time and usually spend our warm up together...then he takes off and I TRY to keep up.

Lucky lady! That is some serious quality time in my book. The hubs and I used to run a lot together. We even did about 3 marathons together. Once he really got into cycling, he let the running fall by the wayside. I'm working on him again though. It may take a while.

Yay! The blog is working! It looks great and I like that we don't have to click over to a separate page to read the entire post now. THUMBS UP!

Nice job on the double and kudos to hubs!

NICE! I love running with (OK really far behind) my sweetheart..

Yeah for running together!! So glad you were able to get out.I love when hubby and I get to hit the trail together1

Awesome that you guys got to get out together like that. My husband and I used to train together all the time pre-kids and now rarely do it. I miss it!

What a wonderful date! How awesome that hubby has joined you in barefoot running. I'm going to try it the next time the kids and I are at the track.

Hi Angie,
God, I wish that my hubby ran! I think it would be so nice if we both liked to run:) It is awesome that your man went for a run with you....barefeet and all:) Now that is love! Take care!

Aww that is so cute that you guys ran together. Seems like he didn't complain much about his first outdoor bf run even though it was on a rock path next to the train.

Aaww! How fun. Glad it was a good run. Those runs are my favorites. I wish I could find a running buddy too. I love running with Jason but it gets tough to find someone to watch the kids. If only we lived closer!

I think Jaymon must be a cool guy. He gets a big thumbs up for getting into barefoot running with you and for the Pearl Jam t-shirt, of course.

That is so great that you got him out and running! You're right about other poeple's pace making you go faster - that is always a good feeling to have someone else push you faster than you ever thought you could go!

BTW - you're crazy with those two a days.

And he was barefoot too, how cool. My wife started running last week, so some day I hope to run with her (maybe barefoot too).

how fun for you guys! And both Pearl Jam and Waynes World have a special place in my heart! : )

I LOVE the running together thing.

Not sure how you do it barefoot though. I felt my face cringe just thinking of being the one running in those photos. So impressed. :)

I also like to go for jogging very much and that is why I have purchased some running tights also so that I can jog comfortably. It is great that you both are doing jogging because it is good for health.