"We must embrace pain and burn it as fuel for our journey." ~Kenji Miyazawa~

Its been a low miles week last week with life and fatigue and sickies taking over.  Yesterday I planned to get  up and run and get back into a routine however that plan crashed and burned with a very ill spawn being sick through the night before.  Poor poor fella. He is in good spirits but still not feeling well. So glad I had some nuun for him to drink (and thank the goddess that its just one of the four boys under the weather).  It helped keep the dehydration at bay.

This morning he did make it to school so I was off with Milo my 4 year old in the running stroller. I was missing my hill route in the cemetery so that's where we headed.    I have been feeling emotional, and just plain off the last few days.  This run tested me emotionally and mentally as much as it did physically. It was a battle to keep putting one foot in front of the other faster than a slow walk.  My heart and my legs felt so heavy. 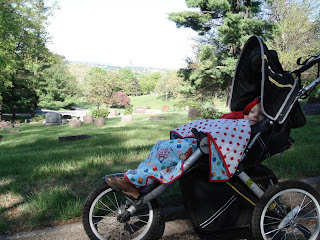 Here is Milo on our loop back down the hill.  I actually cried going up the hill that first time from the bottom. It was a purging of stress. The pain that was felt was the stress melting away but there sure was a lot and it hurt when it left. Not wanting to repeat that but it sure felt better when I had some endorphins going!

I am terrible at thinking that I have let things go when in fact they build up and fester and its like a snowball of ridiculousness. Running helps to turn down the volume and purge the stress that builds.  Things are changing for us. We are all growing as a family and as individuals.Subtle adaptations of every day living and I sometimes get stuck in a rut trying to hang on too hard to the way things are right now.  So don't worry!  I run because I know this about myself and it just plain makes life easier.

I did seven quarter mile loops at the top of the hill. I lost count so I am pretty sure I ate a loop.  Ah well, its better than not getting enough and having a false sense of accomplishment although I really should come up with a better way of keeping track since I tend to zone out. 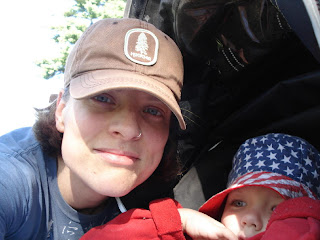 I taught Milo how to say "GO MOMMY GO!" and "PUSH UP THAT HILL MOMMY!".  It was cute and made me smile and I got up those hills.  It was sunny but chilly and Milo had to wear his favorite hat and wrap up in a blanket. I even wore my favorite "Tree Hugger" hat.

I had to keep telling myself to "keep your damn head up" and "don't lean over" ,"Stand up straight" and "push the stroller don't lean on it."  I was able to keep myself from doing those things but I had to be strict with myself.
I wear my Teva Proton Water shoes when doing hills with the stroller since I need to push off more and I don't want to tear up my feet. Some day I will be able to run with the stroller barefoot on hills. Someday though they will be running with me instead of being pushed in the stroller! Not sure which will come first. For those that wonder, I don't wear shoes to run hills or do speed work unless I am pushing a stroller.

By the time the last hill was being ran I felt strong again and although a little weak inside I knew that I was not going to let the moments I have to run be wasted and as I was running up the last hill I realized that I had more to give and I gave it. I was able to find that energy hidden away and use it!  I was happy with my run by the time it was time to go home. I ended up with 6.5 miles.
We stopped and picked some Lilacs from two prolific bushes.  Milo is just like his mama was when it comes to picking flowers! 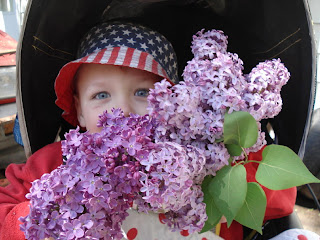 He is no longer going to Speech therapy and his therapy play group and I am trying to spend more time engaging him.  It was nice to have him along on my run and it sure was good for me.  The hills were bloody hell until I was done and then it was lovely and I had a fantastic day accomplishing things.  Sam did some testing with his home instruction visiting teacher.  We planted the tomatoes in the garden after hauling loads and loads of mulch. Then  I relaxed and watched several episodes of Rome with my dear one after the spawn were bathed although poor Jupiter is still sick after just barely making it through school today.

I was feeling hopeful when I found this guy about a 3/4 mile from our house!  Ground scores are the best and this little purple headed super hero reminded me that I love to be out there running even when I don't feel it at the moment.  He is saying "may the course be with you" in a commanding and yet simultaneously squeaky voice. 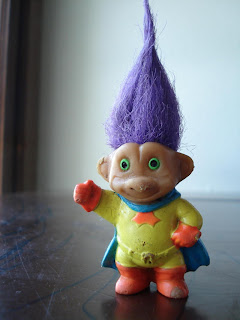 Please sign up for my Whooha Gear $20 credit giveaway!! Don't forget to check the sidebar for other giveaway opportunities around the blogsphere.

And may the hills be with you too!

Nice post. File that one in the Why We Run folder.

I would say even pushing a stroller uphill, there's still very little pushing off needed. Let the ankle relax and flex with the grade of the hill, keep your posture perpendicular, and let the leg lift propel you onward and upward.

How were the downhills?

Great Job getting those hills done! I hope your little dude feels better and you do too, some weeks are just like that!

You are one strong woman!! And I absolutely love lilacs too :-).

I don't remember which wise person said that pain is the weakness leaving the body. I think it goes for both physical and emotional pain.
You are one tough lady. Hills are a challenge even without a stroller. I am glad you had that hard workout, I believe there is nothing better to relieve stress than physical exertion.
We don't really have lilacs in CA. I miss them. In MA we had a huge bush of purple and white ones and when they bloomed I knew for sure winter was gone.
Have a wonderful week, Angie. Happy barefooting.

So glad you got out there and released some stress; indeed one of the big reasons we run! The lilacs were beautiful--one of my favorite flowers.

I hate those kinds of days. It's nice when you can get a run in but tough when you're busy or taking care of sick ones. I haven't been running as much as I would like in the last 2 weeks and it's making me nervous for my impending races. I'll do the best I can do and see what happens. Glad you got out and great job on the hills!

Oh Angie,
You rock girl!! You did awesome doing those 7 hill repeats:) They are tough to do and you did them pushing a stroller!! Go you! You were so lucky to have Milo as a cheerleader...that made me smile:) Cute picture too!

Nice job on the hills with the stroller!

Do your shoulders and neck ever get sore from pushing the jogger up hills? Lately I must be really using my upper body instead of locking my arms and pushing with my body because I have been dealing with a bit of soreness. Or maybe it's just a sign of muscle growth. I can dream, can't I?

Those lilacs are heavenly! This mornings amazing things was a sound - a woodpecker. I could her him for 2/3 of my run. It was so nice!

I love the picture of your kid with the lilacs, so precious. Great job with the hills, the extra resistance must be awesome.

Good job running hills with a stroller! Glad it let you get some stress out.

See, that is what I need.... Lots of motivation when I am doing hills. But, you know, without all of the extra weight of a stroller. Cheerleaders maybe?