Find that thing that makes you feel badass

Do you remember the last time you had an idea or was inspired and quit before you even tried.  You formed an opinion in those brief first moments.  You told yourself in those moments of hesitation that you could not do it.  "I can't do that pose."  "I can't run that distance."  "I can't lift that weight, climb that mountain, pass that class, learn that new thing.  Its just too hard."   All of this having been formed as opinion before even trying.  That opinion was formed through doubt and FEAR.

Trying means putting yourself out there and living with the idea that you might fail.   Which most of the time will probably happen until we keep tweaking until we get it right.  Sometimes though I try something new and BAM!  I get it on the first try and wonder why I was so scared.  Those experiences help me to try again and keep trying despite the times when I fall flat on my face!
Something wonderful and comforting to remember is that everyone, everyone has been in this same place before.  Every single human being feels fear.  It sucks but its not the end of the world or it shouldn't be.  Its how we handle our fear and if we choose to do something even though its scary or uncomfortable. 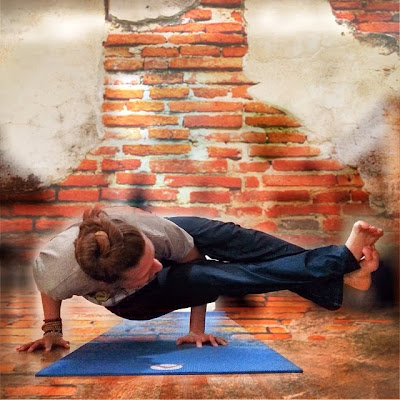 I was inspired by myself and the comments I get when I post a picture of myself doing the eight angle pose.  It is a badass pose!!  It is pretzely and seems to defy gravity.    It is a perfect example of trying something that looks crazy hard and then having an OMG moment realizing that it was silly to have ever thought you couldn't do this.  I got it on the first try!  There is an elation and sense of relief that failure was thwarted with ease.  You took a risk and put yourself out there and was surprised with success.

Of course it goes both ways.  I have tried things that looked easy and I had no doubt that I could do with said ease only to find that what I see my body doing in my minds eye and what I can get it to do in reality are very very different.   Its that sinking feeling in your gut of defeat and feeling totally bummed out.  Its the exact opposite of the scenario from the previous paragraph.

It's rare that  I try something new and just get it.  Its is 9 times out of  10 a long journey of incremental adjustments and tiny achievements.  Its nice to try something and get it but its also kind of boring and over pretty quick.   It is nice though to get into this pose and think " this and that sucks right now but I can do this badass pose so its not all crappy."   For those out there that will say that yoga is not all about the poses, sure I agree, but its still useful and good for the spirit and self esteem to do something that makes you feel confident and that is part of yoga.

My challenge to you, and to myself as well, is to practice finding an upside, a silver lining, of any situation.  Focusing on the positive will make the hard parts of the journey so much more bearable and allow us to be happy in the midst of struggle.  There is always an upside.

This is an oldie but a goodie!