Archimedes came up to me and said he wanted a Christmas tree.   We have a limited amount of floor  space so we were trying to come up with something that suits our lifestyle and small house.  I decided to replace the wall tree with a christmas tree.  We don't make a big thing of Christmas.  We are not religious so for us Christmas does not have the christian meaning that it does for others.  I do however really like the decorations and the lights.  I hang Winter Lights right around when Daylight Savings ends which is also around Diwali.  It's festive and brightens up a bleak time of year.  I leave them up until daylight savings begins again in the spring.

I come from a very religious  family and growing up Christmas was a big deal.  I liked giving gifts but hated the feeling of pressure and obligation.  I also didn't like having to wait until birthday or christmas to get something I thought I wanted.  I liked the excitement but December 26th was the most depressing day of the year.  Such a downer day.  Its like the day after your first marathon or any race you have been working so hard for and then you wake up the next day with no purpose in your life and a bit of melancholy.     For me, thats what I remember about Christmas.

I also remember the feeling in my heart when it sank into the pits of growing up hell when I learned that my parents had been lying to me about Santa Claus.   It wasn't so much that Santa wasn't real but that my parents had fed me a load of crap.  I felt the same way when I learned that there were no such thing as snipes.  I felt betrayed and I never did have the same amount of trust for them.  I wondered what else they had lied to me about.  I felt lonely, vulnerable, and broken.   It created fear in me that they could lie to me like that and they enjoyed making me believe something that they knew wasn't real.   I felt like I was the butt of an inside joke and everyone was laughing at me.

So with my children I have always maintained that Santa, the easter bunny, tooth fairy, and the flying spaghetti monster were not real but its great fun to pretend that they are.  Kids are stellar at pretending and they have no problem with the fun of, most recently for example, the tooth fairy that hid money around the house and left clues under the pillow as to where to find said money.   He knew it was me but he had no problem pretending it wasn't.

I wonder how many other people out there have reservations about christmas.  Wondering if there isn't a better way to spend time and money.   I worry that I am not making enough of an effort with family this time of year or that I am not making traditions for the kids.   For us though it just doesn't work to have the build up and the high intensity.    Its disruptive to the rest of our every day lives.   I don't want to go back to the ways of my childhood.  So we do things our way.


I am estranged from my brother and my mother.  My father's health is poor right now and he and his partner smoke.  Its ok for an afternoon to spend in their house but if we stay the night its awful waking up after breathing the smoke.   My father in laws wife smokes too so its unpleasant to visit them as well.   My mother in law is great but her health is also poor.  It would be fun to skype or facetime  with the grandparents but they refuse to learn the new technology to bridge the distance between us geographically.  Le sigh.  Coming to terms with the fact that the grandparents just are not much of a part of our lives despite what I want for my sons.    I see the value of staying relevant and up to date on the current technology in order to stay in each others lives.   Its something I will make a priority as my sons grow and I , hopefully, become a grandparent.

The flip side ......  I do like that we have the freedom to make our own way and navigate the holidays in a low key, minimal, and mellow way that works for us.  No passive aggressive family members.  No tiptoeing around someone else's inner conflicts about their childhood, no smoke inhalation, no excessive money spending. No over eating or exposure to drinking and smoking.  etc, etc, etc.  It may be a bit lonely and different than my childhood but I am certainly not wishing I were somewhere else.


Our word tree needed replacing so I made a Christmas tree and we made ornaments and decorations for it.  Art is what the season calls for!  I felt the inspiration and went with it.  Contemplation breeds creation.  I whipped it out in a couple of hours including making ornaments.   Making something and painting on a large scale like this was just what I needed to work through my conflicts about the holidays that are left over from childhood.  Its baffling sometimes to realize how much of my life has been spent overcoming issues from growing up.  jeesh.
Art cleanses the soul. 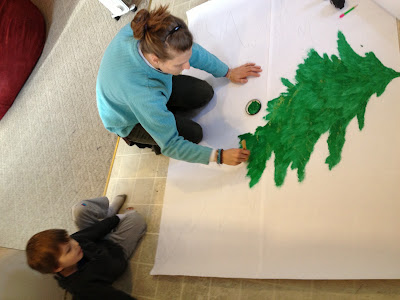 A friend of ours gave us a large roll of paper and it has been one of the best gifts ever!  I used two five  foot long sheets and taped them in the middle with a bit of overlap.   I then sketched out the outline of the tree with a pencil.  I  thought that I would adhere to the boundaries but discovered that my inner Bob Ross found that painting a happy tree was much more desirable.

I used an old paintbrush with thick course bristles.  I liked the Kelly Green paint I had in my art box.  The thick bristles did a great job at making a textured needly look.   As soon as I started painting and discovered how the brush wanted to make needles, I went with it.  It was a lovely surprise. 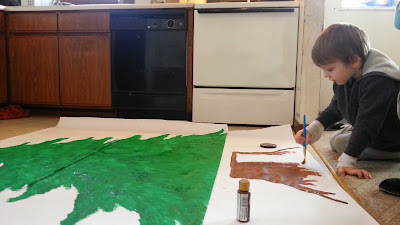 I had help painting from Archimedes both the body of the tree and the trunk that was cut out of another sheet of paper.  The tree measures five feet tall and five feet wide at the widest.   It was cut our with kid scissors since somebody didn't put back the adult scissors after using them!! 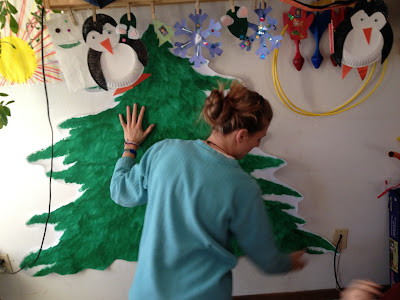 It was hung with poster tack.  We spent some time making ornaments and paper chains for the tree and some of the ornaments that they had made at the home instruction winter craft day were used as well to beautify our tree.  There are also some mushrooms from Mario Brothers that Milo and Medes made  weeks ago that needed a place to be hung. 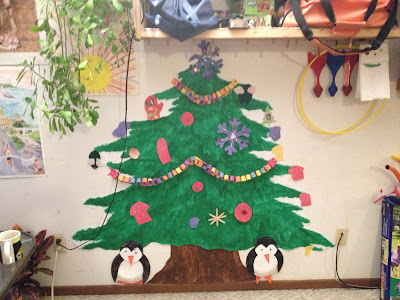 The finished tree is festive and in a week or so I will take off the decorations and touch up the tree and add some pinecones with words to learn on them.  Maybe some birds would be fun too.  Of course when I look at it  I see how I want to improve on it but for now it was a lot of fun to make and I feel good about this holiday season.  Each year I feel more mature and flexible and adaptive.  It will be interesting to see what my boys do this time of year when they are grown.  Will they be painting trees or making a robot tree or maybe digital walls that they program their tree onto....

I hope you have found a way to brighten the dark time that comes this time of year!  I wish you peace and happiness and I hope that you are enjoying the people around you.

I LOVE your Christmas wall tree! I also love your approach to Christmas. I often feel like Christmas has gotten way out of hand. Even when we try to keep it low key with our boys, our families go nuts. And it becomes all about the things rather than the spirit of the holidays. I hope that you had a wonderful holiday.