I posted earlier about Crustless Pumpkin Pie and Maple Sriracha Pepitas.   I was getting a little tired of  pumpkin pie, ok not really, I just thought maybe I should use the pumpkin in  a new way.  I had cut up two pumpkins to get the seeds to roast as I was craving something spicy, sweet, and crunchy and was left with one  raw pumpkin that will be future pumpkin pie and a baked pumpkin waiting to be used.

After my dentist appointment today I did not want to chew, and was feeling motivated and inspired as a coping mechanism to the discomfort, so I decided Pumpkin Chili would be comforting and the perfect way to use up that baked pumpkin.   I named it Sassy Pumpkin Chili because the Superhero tasted it and said "ooo thats good!  It's sassy!"  He generally likes the food I prepare but "sassy" made me feel fabulous! 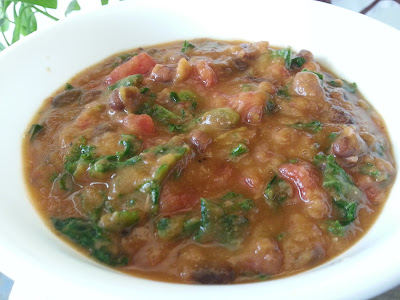 The way we prepare food is usually done in bulk.   We save our glass apple sauce jars and store chick peas, beans, tomatoes, and soups in them.  We will boil 5 pounds of beans or chick peas at a time and then jar and refrigerate so they are ready for just throwing something together like today when I was tired and wanting comfort food fast.  Chili = comfort food!

In a large soup pot add the beans and pumpkin.  This is a "throw it in the pot and stir recipe!" 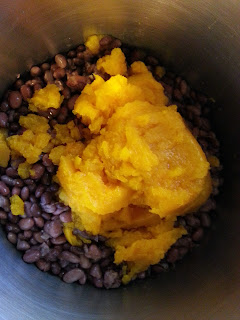 Add kale on top of the beans and pumpkin.  Kale is fluffy so it always looks like a lot more than what it does once its heated and wilted.  I added half a bag of kale.  I buy the kale that is cut and washed.  I love how they just chop up the stems!  Its all good for you and the stems add texture.   I chopped the kale a bit more before adding to the pot although its not necessary. 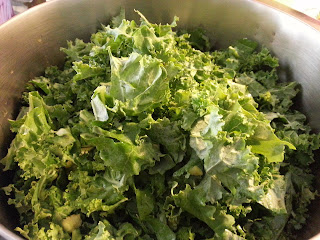 Throw on some tomatoes!  You might want to pour on the juice as this chili gets really thick. 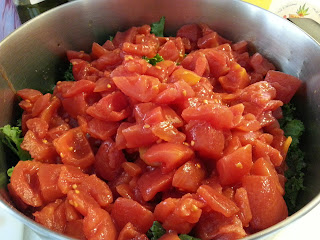 Next add your spices and olive oil.  The key to this is the cinnamon and pumpkin pie spice.  You want to be able to taste and smell it but not where it overpowers the cumin.  Taste it as you go since when I made this I did not follow a recipe so I might be being conservative in the amounts. 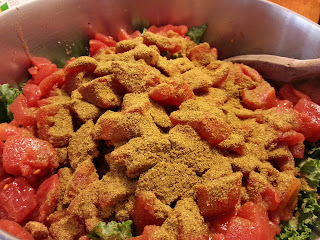 Stir well and continue to stir on medium heat until its nice and hot.  The kale will wilt and the flavors will start to marry.  I added some water to my batch because it got really thick.  This is great because then you can add water  or tomato juice to get the desired texture and consistency.  Its always much harder to get it thick again if its too fluid. 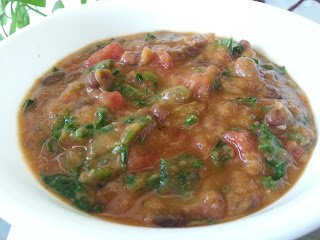 After I took this photo I added 2 tbsp of nutritional yeast.  The second bowl I ate a couple hours later, I added Sriracha!   It's really tasty right away but with all chili it gets better overnight.   This pot of chili should feed 6 people and have leftovers.

Have you made chili yet this fall?  What is your favorite comfort food this time of year?

**I soak the beans for a day or so and then boil for a couple of hours on low heat.  My husband is a doll and he jars up the super hot beans in our saved apple sauce jars and then puts them right in the fridge.  Its like semi canning.  You can use canned beans and follow the recipe on the back of the bags of dried beans if its your first time trying them.  Beans are great in that you really can't screw them up!

The key to red beans is to rinse them after boiling.  After you boil them throw that water out before using them in dishes or soups.  You can store them in the water just make sure to rinse before eating.

***Cut a pie pumpkin in half, clean out the seeds and scrape out the stringy pumpkin guts.  Place cut side down onto a baking sheet and add about 1/2 inch of water to the pan.  Bake on 350 for 40 minutes.  I use a convection oven but it should be quite similar for a conventional oven.

Just made this tonight...amazing! I used carnival squash as I was out of pumpkin and did swiss chard instead of the kale...what a unique taste! Thanks so much!