We have about 10 pie pumpkins and although they keep well and are fabulous fall decorations, and the wee fellas play with them, they do need to be eaten up.  I love love love roasted pumpkin seeds but there is this pumpkin left after you eat the seeds. The ratio of seed to pumpkin is just not fair.  No matter.   My favorite use for pumpkin is of course pumpkin pie however I don't eat nuts and most gluten free crusts use nut flours and I avoid gluten so whats a girl to do.  I was just eating pumpkin pureed with spices which is tasty but its not pumpkin pie.  Fall is just not autumn without pumpkin pie!

I glanced in the cupboard and saw a Gelatin box.  Gelatin usually gets used by the oldest spawn to make gummy candy.   I had a spark of inspiration and I started reading the box and saw a cheese cake recipe and thought that I could just substitute pumpkin for the cream cheese.

Miraculously it was stellar!  Most times cooking is hit or miss with me.  I have inspiration but the universe doesn't always cooperate but for this I was smiled upon.   I already have some ideas for other substitutions like sweet potatoes with maple syrup. 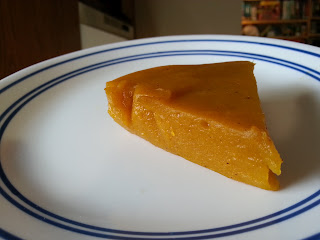 Ingredients:
1 pie pumpkin (bake and scrape from the skin)
2 tsp pumpkin pie spice
(all spice, cinnamon, and cloves, can be used separately if you want to tweak the flavor)
4 tbsp brown sugar or whatever sweetener you prefer.  I want to try pure maple syrup.
1 1/2  packets Gelatin (2 packets if you want it quite firm)
1 1/2 cup water
pinch of salt
splash of vanilla or 1 tsp 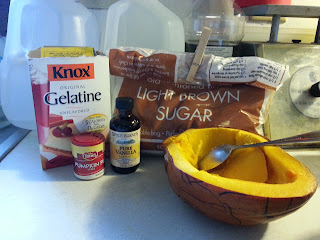 Simple ingredients and I know Gelatine is not vegan but I have yet to come up with a vegan recipe for this.  Pectin is a bit sour and changes the flavor so more experimentation needs to be done.  If you have ideas on this or recipes to share I would love to read about it in the comments! 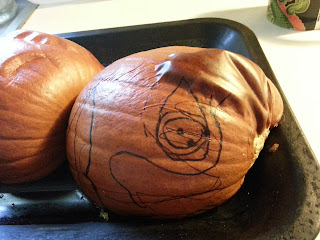 It adds to the charm that the pumpkin has a face and of course the weird bulbous growth it got while baking adds to the whole Halloween spirit.

I bake pumpkin in a convection oven for 35 minutes and add about a half inch or so of water to the bottom of the pan to keep the pumpkin moist while baking. 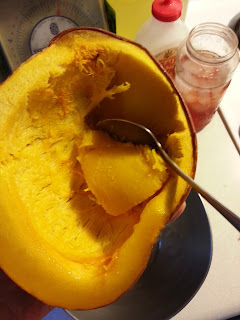 Scrape out the pumpkin goodness and put into a large mixing bowl.  Add your spices and vanilla to the mixing bowl as well. 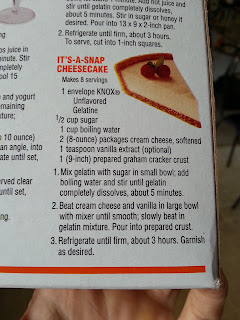 Here is the recipe on the gelatin box. I modified of course but adding your gelatin to boiling water and stirring is the key to all of this.

I absolutely did not add the 1/2 cup of sugar.  I only used a little bit and would love to try honey or agave or even maple syrup in this.  Since its not a baked recipe the honey would keep its beneficial properties.  Yeah, skipped the crust too.  I like that I can eat this often and without the crust is has much less calories to worry about.  Even if you used a nut crust it would mean having to limit your consumption and with this crustless recipe its about 50 calories per slice.  You could have pie with every meal!

Bonus, Pumpkin is quite nutritious! 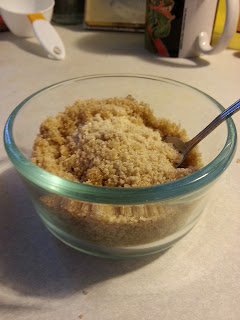 Mix the 4 tbsp sugar and gelatin together and get ready to pour it into the 1 1/2 cups of water that you are boiling on the stove.  As soon as it boils pour in the mixture and stir continuously until it is dissolved.    Then pour it into your mixing bowl with the pumpkin.

The first time I made this recipe I spilled half of the gelatin and water mixture and luckily I didn't get burned just made a horrid sticky mess across the counter.  Yes, just call me Grace.   Since I couldn't measure how much I spilled I assumed it was about half and repeated the boiling water and mixing gelatin process again.   I tried  making this pie again the next day and used two packets of gelatin
to 1 1/2 cups water and it was much firmer than the first time but the flavor was lovely all the same. 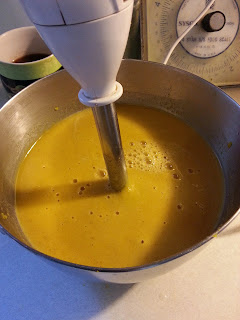 Using a hand blender, of which I use every day for all kinds of things, carefully blend together the pumpkin, spices, and gelatin sugar water mix together until no lumps are in the mix and it is a bit frothy.  The hand blender is second in line for most used kitchen tool in our house next to the counter top convection oven. 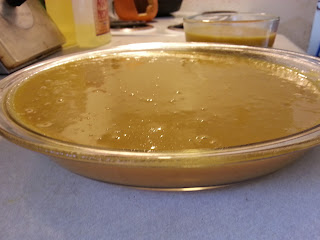 Pour the mixture into a pie dish and chill in the refrigerator for a couple three hours.  Until it gets firm.

It slices well and of course you can add whip cream and I am thinking I might want to cut it into bite size pieces and coat in chocolate!

Let me know how yours comes out and if you try the sweet potato maple version!
Cheers,
Angie Bee

Preheat a deep dish pie pan in a 375 degree oven. Mix all ingredients thoroughly with a mixer. Pour into a saucepan and heat over medium heat, stirring, till warm to hot, but NOT boiling. Pour into preheated pie pan and bake 30-40 min.

Maybe you could use chia seeds to help set it? Polka Dot pumpkin pie!