We are not real big on holidays in the Hotz/Bishop house.  Its not that we don't recognize the special day but we make it a point to spend time together often so its really just another day with maybe an extra hug or two.   Since I am the only girl in the house and THE MOMMA in a house of 4 sons and a loving partner I get treated pretty special.  I don't mind :)  We do some fun stuff for the boys for birthdays but we have random parties just because on random days just because we feel like it or maybe because Archimedes started wearing underwear full time.  That deserves a party.

On Saturday before mothers day,  I coached two ladies who drove two hours to have a coaching session. Talk about determined to learn better form!  I love that.  I like to coach at the state fair grounds.  Such a nice place to train next to the masters garden.   Lots of great questions and it always inspires me to work harder on myself after a coaching session.  I take for granted how hard I have worked over the last few years to run injury free.  Its been a good few years even despite the other setbacks I am experiencing but more on that another time......

So, coaching,  I first take a before video of my client running.  Its a trip to see oneself running!!  I then look at their form and then  I go through the drills to rewire the brain to run in a different form and gradually go over why while we are working out.  The drills help the body to learn new movements without being slowed down from the stress created by learning something new and "overthinking" it. We put it all together with a bit of running at the end and then I video them again.  Lots of jumping and squatting and on Mothers Day my legs were feeling it.  It felt good to think of how my boys see me.  They have a fit momma who try's to take care of herself for them as much as for herself.  They are quite active so I feel pretty confident that our example is working. 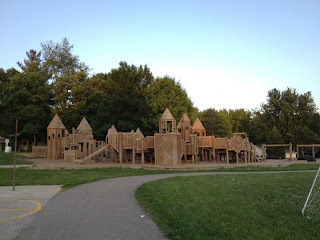 On Mothers Day we hung out at a local school playground just before sunset on Sunday and it was lovely.....up until Archimedes, gotta love him, says he has to poop.  We go racing off to the porta potty.  He opens the door and goes in and then with a very serious look on his face declares that he in fact does not have to poop anymore.   This was his first porta potty experience.  I don't blame him one bit  Long story short he pooped his pants.  Oi.  The upside is that he learned a life lesson.  Sometimes if you gotta go you just have to accept that even though were you decide to let it out might be gross, its not as gross as pooping your pants. 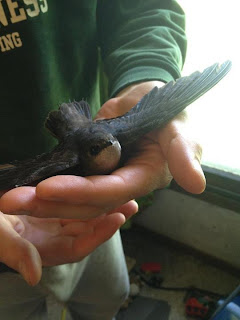 I almost forgot, the big excitement in the house was when a chimney swift flew into the house.  So pretty and the boys thought it was THE COOLEST THING THAT HAD EVER HAPPENED TO THEM.  Of course the excitement has worn off but it was amusing to experience the random times when the universe shakes things up in a wee fellas day.

So now that you get a taste of how lovely my life is and how lovely my children are you get the super duper chance to see a taste of reality.   Being a mom is frakkin nuts sometimes!!  When I first became a mother I remember hearing the song The Way by Fastball and being appalled that someone would walk away from their lives, from their children.  How scared they would be and how awfully they would suffer.  Just pack up and walk the hell away.  Then I had a few more kids and well, I love that song now!!

Fantasy is a beautiful thing.  It keeps us sane.  It keeps us grounded in reality when it really counts like when the adorable four year old has an attitude and is being a downright asshole and won't cooperate and is being totally unpredictable.  He was just being a mature well adjusted little person and then BAM he is now a monster from another planet.  I think its contagious and its hell when they all get an attitude.  It doesn't happen often but when it does.....oi.

What song do you think pops into my head during the monster moments...  You guessed it.  Actually it has become an inside joke between Jaymon and I.  When the troops are really crazy one of us will start singing that song and daydreams of long runs together, endless road trips to beautiful beaches,  coffees while people watching in some quaint cafe, warm sun and the wind at our backs, days spent naked together.  The whole freakin day.  Freedom.   aaahhh freedom.

After a few moments of fantasy I can then step back into reality and remember that the little monsters will grow up and I will probably miss the good ol days when they were little and that being a mother is what I dig the most.

Thanks for sharing a day in your life. From coaching to playgrounds to pooped pants and unexpected guests, each day is an adventure!

Certainly a day that I can relate to! I remember trying to teach my daughter how to go behind a tree when she was little - she just couldn't do it and ... accidents will happen.