For Birth Junkies. Thank You Ina May Gaskin.

I recently came across this article about Ina May Gaskin and was taken back to my days of knowledge gathering while pregnant with my spawn.  I increasingly embraced and experienced the births of my sons to the fullest and still like to geek out on childbirth once in a while.  Someday maybe I will teach those childbirth classes I have wanted to teach.

I read Ina May's books when pregnant with my second son Jupiter and although some were a bit trippy for me they resonated on a level that reassured my female mind that birth was normal, intriguing, and didn't have to be this horrible fearful and painful experience.  It can and should be a manageable and calm experience with everyone working to make things easier for the mother and not scare the daylights out of her.  Birth is not something to be gotten away from but embraced.  Regardless of the setting.


My midwife was blessedly late to my fourth son Archimedes' birth.  I had been trained as a doula, birthed my two previous sons naturally and one with a midwife and had prepared for the possibility that my midwife would not make it.   My birth kit was stocked and ready just in case.  As I birthed Archimedes I felt more clear and level headed than any other time in my entire life.  My self confidence was perfectly aligned and I was resigned to be in control, take responsibility, and use my mind to work through my birth.  It was my birth.

As his head emerged I had Jaymon check to see where the cord was and if it needed to be slipped over babies head or not.  He said the cord  was around his neck but loose and not a problem.  I experienced Archimedes move through each of the seven cardinal movements.  I particularly geeked out at the external rotation, or restitution.   After restitution occurred there was a pause and I had a suspition that his shoulders were a bit sticky.  Here is my inner dialogue.  I remember it vividly. "this one may be bigger than I thought, shoulders are sticky.  Time to change position and do the Gaskin maneuver."  I calmly did said technique and his shoulders were born and he was caught by Jaymon.  I later appreciated that I knew and remembered what the Gaskin Maneuver was and wondered , while drunk on the bliss of a new baby, how many in the medical field resented an obstetric procedure named after a midwife with no formal medical training.

We rubbed baby down and massaged him until he was breathing well and looking around and looked nice and pink. No need to cry.  I could see him becoming aware and alert.  He nursed right away and we left the cord intact until Sheryl made it to our house and helped clean up.  A text book birth that was shrank down to two hours.  I had been dilated to 5 cm for 5 days with waters intact.  Many care providers, OB's in particular, would have labeled that "failure to progress" within the first day.  We were both fine just not ready yet.


He was born weighing 8lbs 12 oz. to our surprise as I didn't show as much with him as I did with Milo who was my smallest at 6lb 10 oz.  He was a broad shouldered little fella and I could see why he was a bit sticky.

So the point of this post, to write it down I suppose. To share part of who I am.  To share my experience instead of keep it to myself. To remind people that a hospital birth is not the only option nor always the best.  That options should be weighed.   Its your birth and it should be where you want it.

I read the Ina May Gaskin article and was reminded of how very cool birth is.  My relationship with my midwives were warm and comforting and they loved to geek out on my questions!   Granted, often times when I mention my births women will chime in with how they needed such and such procedures.  My home birth and natural births are not an attack on hospital births but are a resounding example of a different way to do things. In the article it mentions how much the US spend on health care and pregnancy, birth in particular,  and yet how low we are in regards to infant and maternal morbidity and mortality comparatively.   Why is that?


I  had a c-section with my first for being  frank breech.  We discovered he was breech when I went to the hospital at 6cm dilated to give birth to him.  I remember asking my OB a week earlier if baby was breech since it didn't feel like a head under my ribs.  The OB blew me off and said that everything was fine....I did not go back to him for future care.  C-section was a high price for that lesson considering we could have tried to turn him.  I decided that I would pursue a VBAC with subsequent children.  I believed that for me, a VBAC was much less risky than a repeat surgery.

In hindsight I like to look at my c-section as the right choice considering my situation.  I chose to birth my son with skilled surgeons instead of unskilled OB's whom had never even seen a vaginal breech birth. 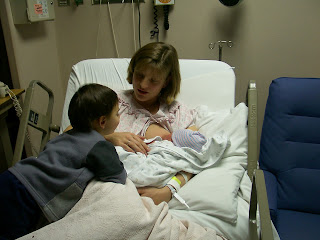 My second was a hospital VBAC with an old army OB that said he had "seen everything unlike all the young doctors these days".  He said the army doesn't want to pay for surgery so they do much more natural birthing in army hospitals, or used to anyways.  I went to him because other women had said he attends Vaginal Births After Cesareans.  When I interviewed him, (I paid for his service and interviewed him for the job) he was so mellow and said that a VBAC should be no problem for me.  We had to drive an hour to get to him as he was in another town.  I had the support and encouragement of our local Bradley Childbirth teacher.  My doctor continued to be mellow and supportive throughout.  Fourty two hard hours of active labor and a 10lb 2oz baby and I was ecstatic and my uterus did not explode much to the shock of some practitioners.  I listened to my body honestly and believed in my bodies capabilities.


My third baby was born in the Birth Center in Topeka Kansas.  We traveled two hours and fourtyfive minutes away this time since the last hospital had changed its policies.  Lovely birth.  Just lovely.  I labored in the huge labor tub and listened to music and ate wonderful food as I felt like it.   My midwife told encouraged us to go for long walks and eat lots of yummy foods first thing when we came to the birth center on labor day.   Some of the best food of my life that day.  Milo was born into my own hands with smiles all around. We all sat around for a couple of hours chatting and eating on the big queen bed before we went back to our hotel to sleep before driving home the next morning.


There were no hospitals that would attend a VBAC here in Des Moines so I went with the one and only midwife in town or even close to me that would attend a VBAC. I interviewed many midwives in the area but none would go to the hospital with me if problems should arise.
Sheryl was blessedly late for Archimedes fast birth and it was just Jaymon and I with the boys sleeping peacefully in the other room. It was our vibe, our mood that we set and no one else there to disrupt my groove.  I danced my baby out listening to Jack Johnson in my livingroom with Jaymon and remembered the wisdom of a woman who thinks birth is a natural and empowering part of life that women should embrace and even geek out on.   Thanks Ina May.  You touched my life.

Should every women have a homebirth?  No. Should healthy pregnant women have that choice?  Absolutely.   For me each birth experience kept getting better the more I embraced it and the last was exactly how it should be.  I had run the birth gauntlet and kept trying to experience my body.  its curious that people say I am daring when what I have done is so natural.   Thanks for reading and I wish you happy and peaceful births and resolution and peace with ones that may not have been what you expected.

You rock, thanks for sharing :)

Loved reading this. Thanks for sharing it!

Lovely post! I had one very medical in hospital birth and one fast and easy at home birth. Ina May was part of my pre-homebirth reading. It was a choice I was so glad I made and so glad I had the option of that choice.