On a barefoot run with Jaymon a while back we stopped to eat some dates after a couple of hours.  Dates are a great way to get some quick calories.  Jaymon said "make sure and chew them up until they are liquid".   In this context it made perfect sense that the more I chew the faster and more efficiently the sugars and nutrients would get into my body but why had it not occurred to me on an intuitive level before that I should be doing this every time I eat.

"Chew your food" was a phrase I remember hearing from both parents and grandparents.  I say it to my own spawn however it's not just to prevent chocking for inpatient bouncy children.
Jaymon recalled his uncle chewing each bite exactly 24 times and all of his daughters to this day could tell you how many times he chewed each bite! 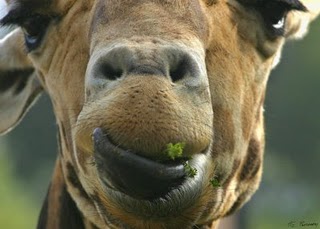 Your stomach doesn't have teeth so mastication or the act of chewing needs to start in the mouth.
Saliva contains enzymes that break down some of the chemical bonds that connect the simple sugars that comprise starches. The first stage of fat digestion also begins in your mouth with the secretion of enzymes by glands located under the tongue.  Chewing creates more surface area for the food to be exposed to said enzymes thus resulting in an easier time of pulling nutrients out of the food down the digestive line.

So how many times do you chew each bite?   The answer varries. If it helps to count then pick a number like Jaymon's uncle did and go with that. That could be a nice form of meditation.  Otherwise a simple rule of thumb, if you can still tell what the food was based on its texture then you didn't chew it enough.

Do you buy organic and pay the extra price or go to the farmers market on the weekends?   If you are not chewing your food and allowing your body to extract the nutrients it sort of defeats the purpose of mindful shopping.  I thought about this when I was chewing.
Poorly chewing your food can lead to flatulance, indigestion, heartburn, gas, IBS, and other discomforts.  As a runner I already want to lessen all of that so I think of this when I chew my food.
Eating rapidly and swallowing large mouthfuls contributes to the reflux which can damage the lining of the throat and esophagus.  Maybe my brother should read this the next time he downs a sandwich in  four bites!

Over the last couple of weeks I have noticed that I have less pain from my healing ulcer since taking the time to chew my food properly.  Time, now that was an eye opener.  I realized that I was not taking the time to eat. I was taking it for granted. I would just shovel it in and here I thought I was not one of "those people".  I do get impatient but it is getting easier and I eat less because my brain has enough time to communicate with my stomach and decide when I am actually full instead when its too late and I already have stuffed myself.  Taking smaller bites is mandatory now that I am chewing them to liquid.

On a spiritual note, I appreciate my food while I chew.  I have time to think about what I am doing so I think about my food and where it came from, whose hands had played a part in its growth and so on.  I think how very fortunate I am to have food to force myself to chew.

Masticate and do it often.

Something I never give any thought to, but so smart and simple. And can I tell you how much of a date kick I am on these days? I love them and find them so filling for a snack.

somehow it hasnt ever occured to me to bring dates on a run. thanks!

wow honestly I never give any thought to chewing my food! I have dates in my cabinet.. they're prb rotten :(

Food for thought today...thank you Angie. I love posts like this that make me think of my daily living in a new way. And the spiritual side of it too...thinking about your food as you eat it...where it came from, how it is giving to your body, the energy that goes into it, etc. Awesome post.

So important, Angie! Very good points about nutrition and digestion. I've heard similar comments about people feeling freed from pain simply because they're masticating more. (Such a funny word!)