I can't put a skateboard at the edge of a ramp at the skate park and not ride it down.  I also can't stand up on it and go down but I CAN sit my ass on it and wipe out at the bottom only to run back up the ramp determined to stay on it for a little longer the next time.  Rockin good times! 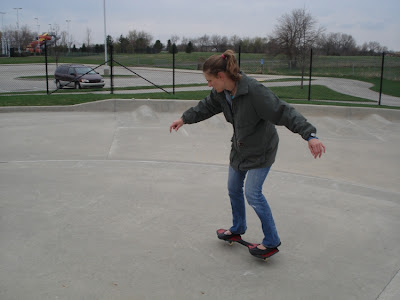 The oldest spawn, Sam, just bought a RipStick which is a skate board type thing only it has two wheels on casters and you shimmy and sway your hips to get it going. Surprisingly easier than a skateboard.  The trick is to get your lead foot on in the right spot and to get going you move only the back foot while putting your weight primarily on the lead foot.  They look IMPOSSIBLE to ride so the cool factor of doing it is totally worth it!
Jaymon thinks this might be good practice for those fighters who just can't keep from going back on your heels.  You move your hips and stay on that lead foot.  No putting your weight on your heels.....sound familiar?   Boxing and barefoot running!
When it gets really scary is when you suck it up, put your weight on that lead foot , and go with it.  Oh and notice my shoes....I just did a review on the VIVOBAREFOOT Kalis as a casual or work shoe.  Who would have thought it would make a stellar skate shoe.  Very grippy!  I ran and jumped all over that park and felt quite stable.
I feared  I had  tweaked my wrist  eating it once but turns out after I rubbed the wrist and shifted some bones on the top of my hand the pain disappeared.  Just some scrapes and sore butt bones.
I have not wiped out as an adult for ages and I must say that the first couple of times made me feel like a bony old woman and the other times I felt incredibly awesome.  Its so much farther from the ground as a grown person. Just like going fast, its best to go with a fall the same way.  Roll and don't splat.  Spread out the force when you land.

I gained some "cool" points with the oldest spawn and quickly learned that I could suggest he try some new moves or try going down a ramp and he would immediately  poo poo the idea.  When I tried it myself then he was inspired to be daring and embrace the fun and not the fear.   Nothing like flying down a ramp and knowing that you are safer going with it than fighting it.  That's true in other aspects of life.  Running downhill can be like that too. 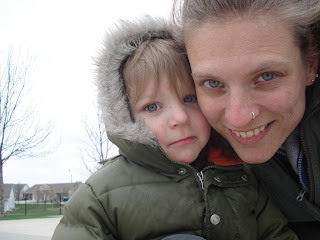 The wee fella bonked his poor cute little forehead and I am always happy to get some lovin.  All day while we were out I had a black thing in my teeth and no one told me. What the hell is up with that??   I always will tell you if you have black shit in your teeth and I expect the same in return!
We ran 11 barefoot miles yesterday and have been totally into going all barefoot again but the weather has kept us from running until yesterday (the rest break was nice)  and I was nervous about being reckless today but I decided that it was too much fun and I was getting better so fast that I could deal with broken upper body just no broken legs.  I tempted fate and won with zero broken bones!  What a core workout!

Fourteen barefoot miles tomorrow or Saturday depending on the weather.  I am loving doing longer runs 3 days a week and its easy to get those higher weekly miles.    I had a really hard run on the last 11.  I had eaten some Skittles earlier in the day, which I thought were ok, but they made me kind of crazy the way many foods do and why I have a very strict diet that has taken years to refine.
When I have a food infraction it leads to a self preservation sort of mode where I distance myself  from my dear one and am soooo far from being mellow to say it nicely. I get quite anxious.
I HAVE  to prepare better when I go out.   I had a work meeting earlier in the day and got lost getting there and was starting to feel hungry and dizzy so I bought some candy.  Now I know and WILL plan better.  The upside is that I am in touch with how foods affect me and it does go away after a couple of days. My spouse is a saint.
On the run we held a steady 9.17 minute mile and were comfortable so I think I can do a sub 2 half and a 4 or a sub 4 marathon this year.  I love every step of running so its fun to plan ahead but as long as I get to get out there with my bare feet I will be happy.

As an aside, the meeting went fabulously and I have been promoted with nuun as well as getting a raise.  I love my job :)

When I use Badassery in a game of scrabble and my friends challenge my choice of words. I hope to find your picture in the dictionary giving them the finger. (a thumbs up of course)

Congrats on the badassery and the Nuun promotion!

Way to go Betty Badass! I heard NUUN just parterned up with TEAM In Training...SUPER PUMPED!

Congrats on the promotion and raise!

You are a cool mom!

I wish I could skateboard without ending up on my bum! Love your new header btw!

That looks like so much fun. LI is itching for a skateboard so I have a feeling that I'll be embarking onto those days soon enough.

That is some serious badassery, girl! I totally know what you mean about crashing as an adult. (Funny I just blogged about that today) I don't know what's wrong with me, but I've been getting a little more reckless the older I get. What's up with that? Maybe its living in a house with all boys? I don't know. Sounds like you had a great run! Glad your job is treating you right. And for the record, if I saw you had black shit in your teeth. I would totally let you know. :-)

and I love the photo of you on the skateboard!!!!!

My son has one of those Ripsticks too and I love it! It is hard though at first. All the neighborhood kids think I'm cool though because I can ride it. It's a good core workout!
I look forward to the day when I can do 11 miles barefoot.
And your package was just amazing! THANK YOU!

Great photos of you ripping it! Ditto on the badassery.