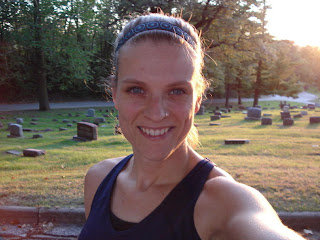 Barefoot running to the top of the hill of my favorite running route always puts a smile on my face. I ran with my sexy, kilt wearin', barefoot runnin,' hubby in circles around the park for six miles yesterday evening while the kids played.
When Jaymon was done running his six he took the spawn home and I took off to run some hills up the road and then ran home just as it got dark and finished up with 9.83 miles.  Perfect fall evening. Life is Good.
September is behind us and it was a busy month that flew by.  I am feeling some trepidation about October.  I am working more and more as I have garnered more responsibility with nuun and have much going on from now until the Marathon here in Des Moines on the 17th. Work, traveling, schooling, playing, a marathon to run, maybe an ultra.  Full month October will be and I will be tested. I will be stellar despite being nervous....
I am traveling to Michigan on Thursday to meet with a company (yay!) and I have to fly.....I went to school to be a pilot for a semester (couldn't commit to being a glorified bus driver so did not continue).  I love to fly.  I have jumped out of perfectly good airplanes and when my feet touched the ground after that first jump I put on a new parachute and went right back up again. Seriously I went back up like 10 minutes later.
I am a bit nervous to fly now.  Part of the problem is that I have allergies and have pretty constant sinus pressure this time of year and I worry that it will be exacerbated with altitude.
I have not flown since I have had children and just like being afraid of storms, which only happened after reproducing,  I am afraid that the fates will draw my number and I will go down in a fiery ball of flames.  I beseech the universe to give me the grace to find my WHOO HOO holler and smile at the ground.
If it will be my last adrenaline rush I pray its a good one. 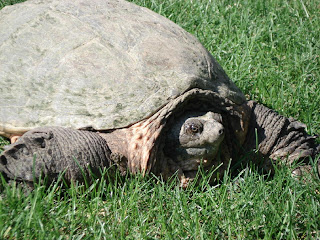 If I do die and there is reincarnation, maybe I will come back as this bad ass!
I was in Grays Lake Park going over work notes while I was waiting for Sammy while he was in Block Class and I spotted this monster walking in the grass across the road.  Check out those spikes on his tail and by his feet.  I wanted to get closer but my minimal shoes would not have helped me keep my toes if he decided I was offensive. I have tried to help one of these dinosaurs  hurry across the road once and it hissed and snapped and could reach its head halfway behind itself and eventually I said eff it and let him win.  I saw this fella disappear into the bushes as I drove away to go get Sam. He was rather spry for being considered a slow beast. 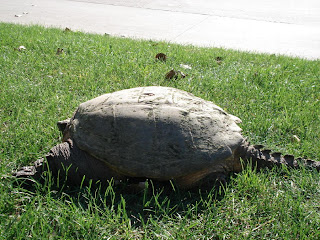 One more bit of randomness before I lounge with the spawn and watch some King of the Hill.
Every time I put on or take off my recovery socks I get a charlie horse in my abs on the upper right side.
Every. Single. Time.  I have tried to alter my sock donning technique however I have come to accept that if I want fresh legs I have to endure about 30 seconds of cuss worthy pain. Meh. Fresh legs are worth it I suppose.
The CamBand in the top photo is the Sparkle Up.  Go check out my CamBand giveaway here!
Run Happy!

Sounds like an awesome run! Glad to hear the nuun thing is really working out for you.

I get you on the weird fears since having kids. Very strange. Have a safe flight.

BTW: I have horrible sinuses this time of the year and have tried many things and have always been chicken to try a netti pot. I finally broke down and got one and have to say it works better than any meds I have ever taken. You may want to look into it, but let me warn you it's not fun. :-p

I hear you on fears when you become a parent that you didn't have before hand.

I will definitely come back as a turtle. I already have the speed down pat

Lots going on for October... I know you'll manage to do it all!

That is one cranky looking turtle. I wonder how old he is.

Cramps in your abs? Try sucking in your abs the next time you take off your socks. Tightening the muscle may stop it from hurting.

I cannot picture you coming back as a turtle!

That's so cool that you took flying lessons. My husband has taken some too, although I've told him I will never let him take the kids up with him!

It is WEIRD that those things are just cruising around!