I have had a bright lovely blue Road ID for a while now and in hindsight I wonder why I didn't always have one.
Its hard to imagine something happening to me when I am out on a run or anywhere really.  It makes me think of my mortality.  It makes me think of my young children and my husband and what they would do without me and how I would miss them so from where ever I would end up after this lovely life.

What if the worst didn't happen because the emergency people could see this bracelet on a scantily dressed runner and see that I am allergic to penicillin.  They would read the words "Don't Panic" and instead of the worst happening I would be fine.   Maybe it wouldn't help at all in the grand scheme of things but since we are all going to buy the big proverbial farm at least we can try to better our odds to get more time. 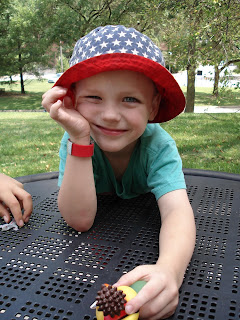 For me, the paranoid hypochondriac with a fantastic imagination, the idea of a Road ID is beneficial to my mental and emotional well being and it makes me think that I am bettering my odds of things going well for me instead of the worst case scenario.

Now comes the mother part.  Oi, the mother part.  Parents out there you know the fears I am talking about.  I won't even type them out loud.   I also have a son with autism.  He is non verbal.  If he were to get lost, he would be doubly so because people would just think he is strange since he can't talk and he doesn't respond to people when they talk to him.  When he is wearing his bright red wrist elite Road ID people will read that he is nonverbal and has autism and understand.

Devon at Outside PR hooked 3 of my boys and myself up with new Road IDs.  I hope she knows how cool I think this is and how thankful I am that my boys have these IDs. 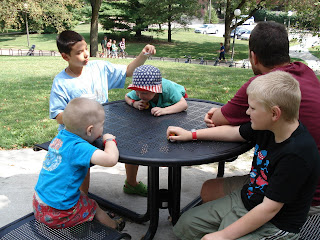 My oldest son Samson chose a dog tag style ID that I won a few months back. (he is wearing it in the photo although its hard to see)   He put "space is the limit" as his saying on the extra line he had and made all of his own design decisions.  How rockin is that!
The three younger boys all got bright red Wrist ID Elites.  They wrist elite style has a plastic or rubber band that can be cut down to fit your wrist perfectly. They fit all the boys all the way down to Archimedes, my youngest spawn.
I went through all the colors with Milo (4) and he loved the red.  I decided to get matching bright red ones for the other boys too. I knew that if they were different someone would change their minds and it would be a fight!  There are lots of color options to choose from.  I had a hard time between the green and blue! 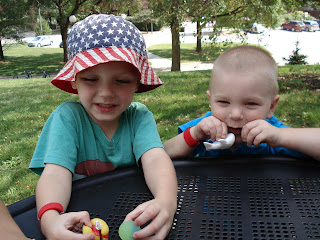 They all loved their new bracelets and they kept them on without a fuss!!  They ask to wear them even.

The first Road ID I had didn't last very long. It was also a Wrist Elite ID.   I wore it constantly and my sweat rusted the clasp and the part that locks it shut. I know toxic sweat right!   I ended up duct taping it shut. This worked fine for a while and then I took a spill at a race and later that evening I realized that my ID was gone and I assume its on the path somewhere near where I wiped out.  I was quite disappointed since I loved every other aspect of my ID.

I had read about other people having the same issue as I had with the clasp.  Road ID replaced the not working IDs and they revamped their design.  I was so pleased to see the new design when we all received our IDs!!

Jupiter, my son with autism, did manage to wear away some of the numbers on the contact numbers line the first day he wore his.  It is still legible although barely but not for long.  I think it needs to be etched in to the metal deeper maybe.  I am just guessing though as to how to remedy that problem.  Maybe making it an option if you know you will be rough on your bracelet.
I like the way it fits and doesn't move around on my wrist and at the same time doesn't fit too snug.  I forget its there and wear it all the time. 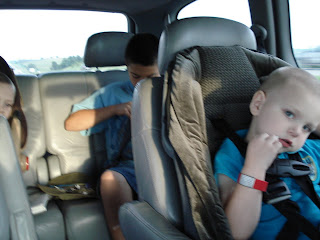 Having a special needs child I think these are a fantastic form of ID.  There are other options besides the wrist elite.  I thought the shoe ID was clever and the sport ID with velcro looks quite nice.  I saw a woman with the one on at a race expo and she loves her design. There is something for everyone.  My sassy 10 year old spawn loves his personalized dog tag style.

I like that there are several lines for contact numbers and enough lines to place warnings like allergies or like for Jupiter that he is non verbal and has autism.
The personalization options are remarkable!   I have to mention as well that they were shipped very quickly and come in a fantastic metal box for storage.

So take a moment, look at their site and think for a bit about the contingency plans you have in place and the ways we try to beat the odds.  I think Road IDs bring a peace of mind that is simple and nice looking.  It takes a load off of sorts and lets me let go of my growing spawn a little more comfortably as well as eases my worries when I head out into the world alone to run or travel or whatever.
My best to you all!

I love this. I'll certainly be sharing this with my sister. So wise.

Great post, reminded me that I really need to sort myself out with on of those!

I definitely need one for me. I run on some remote roads. I do carry my DL but if my waist pack was somehow separated from the rest of me, I don't have any other ID on me.

As for Jupiter, my youngest outgrew the worst of his food allergies this year. Before then he wore a medic alert bracelet that he could neither remove nor rub the lettering off. It was a little spendy, but perhaps you could find sponsorship through his school?

Great review and I'm glad your boys love their IDs!

I'm so glad you boys all have them. I don't think I realized you have 4 boys! Holy busy mama!

The hubs and I have ROAD ID's and love them I had no idea they had ones for familys. I need to send this to my brother and his 3 children. thanks!

I just got a Road ID bracelet myself (http://soskinnyontheinside.blogspot.com/2010/09/my-little-red-id.html) and was thinking it would be great to have one for each of my kids, especially my 5-year old.

I've been on the site a few times, but still haven't bought one.
I like the idea of having them for the kiddos too. They are perfect for trips away from home. I'm ordering something similar for my pooch(collar and leash) who runs with me.

They are a must for people with special needs. I've worked with several autistic children who are "runners" and would not be able to communicate who they are or where they belong if lost. We have a fairly large percentage of alzheimer's sufferers who disappear every year as well.

I'm thinking of doing this for the family for xmas. I can't even remember a time without RoadID, even though it's only been a few months. What a great simple idea.

i've been thinking about getting these for awhile but just never have. i should do it now. thanks for the reminder!

Your kids are so adorable. I love the photos!

Your babes are so cute they all look like their mama :)

Great great review! I love that your kiddos will wear them and not fuss with them.

I need to get ids for my kiddos too. I have imagined terrible situations where LBM and I could be separated while running and that would leave him without any way of telling someone how to help him. (Yeah nightmares often?? yes! Too much Crime tv, yep!!)