Missed him by that much and RunGirlRun love!

Finally I think I am starting to recover from my trip to Bix 7. After taking the kids to the fair this afternoon I think I should finish up my BIX 7 postings.

In my last post about it I mentioned that I wanted to get a picture with Ryan Hall. Who won Bix by the way! YAY FOR RYAN!!
I missed him by that much. (put your thumb and forefinger about a quarter of an inch or less apart here).  So this is how I missed him, one of the cool guys that worked with me, Devin, has a twin sister that has a track coach for a boyfriend named Corey.  I met them on Thursday, awesome family all around by the way.
Friday morning comes around and after I had plodded barefoot through 2.5 very wet, rainy, lovely miles along the Mississippi and just as I was heading out to work the expo again I see a familiar face.
It was Corey, the track coach boyfriend.  I said "hey" back to him when he said hi and seemed to recognize me but we were both walking in different directions. I realized who he was about 30 seconds later.
Come to find out when I got to the expo, Devin said that Corey was at my hotel to meet up with Ryan Hall for a run. Apparently all the elite runners at the race were staying in my hotel!  So if I would have recognized him 30 seconds earlier and made small talk I could have maybe met Ryan Hall in a normal setting instead of standing in line to meet him.  If I would have decided to kick off my shoes again and ditch work I probably could have, after much begging and pleading and trying to act as cool as possible,  gone and ran with them for as long as I could have kept up, which would not have been long but enough to brag about!
Later during the day as we were spreading the nuun love and after talking about the elites that were at the race we notice this dude with THE COOLEST facial hair ever!  Devin and I whispered about him and debated about taking his photo while Vishal was getting him hooked up with some nuun. We decided to ask if he would take his picture with me for my blog. He was uber friendly and come to find out he is Charlie Rodgers! His brother is Bill Rodgers the famous runner that also owns, with his brothers, the Bill Rodgers Running Center in Boston. Bill was at the expo signing autographs that day and Charlie was hanging out and getting his own packet. 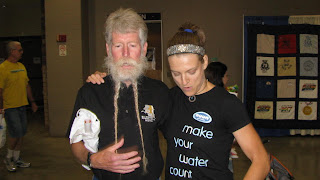 We were making sure our logos were showing on our shirts!  I like this picture better for its candid nature.  He was talking about drinking 12 year old some kind or other scotch ,I think, and how the older and better it is you don't get a hangover after I told him that nuun is good for hangovers when he mentioned the festivities that were about to begin! 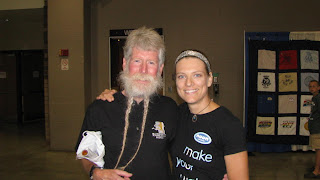 I also met this awesome laday named Lesleh. She was running the RunGirlRun  booth around the corner from us. 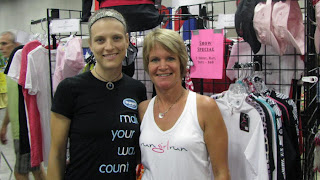 I loved her apparel and traded some nuun and a blog review for an adorable running skirt. It was kind of hard to pick one I liked the best since all her stuff rocked! I did end up choosing this one. 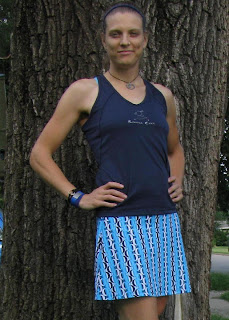 Blue is my favorite so of course the one I went with.  I was wearing at the expo since it matched my nuun shirt so well however I about froze after they turned the air on in the expo center so I changed back into my jeans.
I did run in it this morning and it is quite comfy and has a nice little pocket in the back of the waist band. I wish I could have gone farther this morning but it just wasn't happening.  I even met a friend at Grays lake to run with and I just couldn't run.  I had to stop and walk after about 2.25 miles. I haven't HAD to stop and walk for well over a year at least.  I looked cute though!  In hindsight I wish I would have looked like shit and been able to run but it wasn't in the fates today. 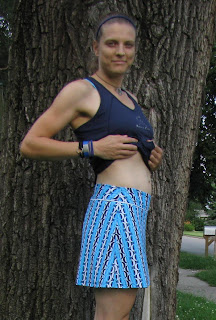 I love the pattern on the sides!
Check out the other cool gear on the Run Girl Run website and here is a smidge about them.
"Over the past three years, rungirlrun's parent company, Regatta Sport has been working tirelessly to create a women's running line that works for the high performance athlete as well as the weekend warrior. We wanted to design running clothes that moved seamlessly from the training room, to race day - and the grocery store. We have had a great time creating clothing that is fun, fashionable, feminine and even a little forgiving! (We all need a little help sometimes!)
Those of us behind the scenes at rungirlrun are athletes as well as mothers, daughters, sisters, wives, aunts and even grandmothers. We understand that your running gear needs to move with you!

We decided we didn't want to notice our apparel while we were running - working toward that second skin concept - however, we did want everyone else to take a second look. We believe we have accomplished that."

Yep, I think they have accomplished their goal too!
I am sort of getting back into the swing of things after my Bix 7 trip.  It was a long trip and I am still a bit worn out. One would think that standing around for 10 hours wold be no big deal especially for the three of us that worked since we are all runners that put in quite a few miles a week but aux contrare, it takes a lot out of you.  I had to remind the guys to snack often and walk around or sit on the stool as not to get get stiff and sick.
The working part paired with the traveling made it great to get paid for a road trip and the minivan (which has still yet to be named)  was awesome to drive and my books on CD made the trip seem to fly by way to fast.  I look forward to my next nuun adventure!   I was promoted to team leader and given a raise too so YAY ME!!!
If you haven't already check out my post on the Easter Seals Walk With Me 5k and family walk I am participating in and fundraising for. My son Jupiter who has autism loves to go to Camp Sunnyside run by Easter Seals of Iowa.
If you have the means, any bit will help to reach our fundraising goal.  It means so much to me to have found a charity that I am passionate about.
Also don't forget to sign up for my Gone For A Run Mantra T-shirt giveaway!!
Hope everyone had a fantastic weekend and its been fun catching up on the blogs and facebook I missed!

Hi Angie,
I love your new skirt! It is so cute and looks so comfy:) How cool to trade products....great idea! Enjoy your week Lady!

That skirt is so, so cute on you. And, how are your abs so fab after all those boys?

What a great expo you had to work at! You have the coolest job.

That skirt is adorable! You look awesome in it.

Congrats on the promotion!

Love the new skirt, don't worry about the off day, I'm sure you'll bounce back strong next run :-)

Look at those arms, girl! You are looking powerful. Love the skirt..it's looks really comfy.

I LOVE that skirt. I will check out the site. I wish you could have braided that guy's facial hair. Maybe next time.

The skirt is super cute!

Did you run the Bix? That's a race dear to my heart having grown up on Davenport. I ran it last year after probably 10 years of not and it was so much fun.

Ryan Hall stayed in my hotel in Boston and walked right by me race morning...it was kinda surreal.