Feel Great, Be Open to Bliss, and Progress 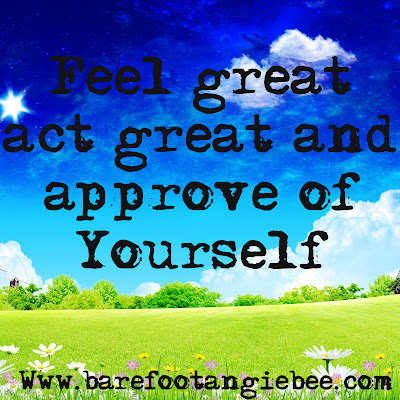 Last week was a crap week.  That is the last I will say about it with negative emotion.  My body was very fatigued and I am not really sure why.  I have some ideas but it doesn't change the fact that I was in bed for a couple of days.   On one hand I feel like there hasn't been "enough" progress in my health because this is still happening.  On the other hand I have made progress in that I allowed myself to watch a shit ton of tv shows.  Typically I am hard on myself for watching too many shows.But I allowed myself to zone out and truly rest.

We don't have cable so it was hulu, netflix, and various other online sites I watched from.  I watched Star Trek and Game of Thrones, The Carrie Diaries, Bun Heads..... I know a strange mix but the point is that I was resting.   I allowed myself to zone out instead of constantly thinking I "should" be doing this or I "should" feel better and adding to my stress and letting it snow ball out of control which could have, and usually does, mean even more time in bed.

The fact of the matter was that I felt like dookie and yet I believed myself when I told myself that it would pass.   And it did get better.  That's progress. That's growth. There wasn't a moment of self berating "next time I will do better".  It was "right on chica, do that again next time."

So today I was feeling kind of blase' and maybe a bit melancholy.  Still coming out of the funk that was last week.  No big deal and to be expected on a day that is dreary with rain/snow mess falling from the sky.  I was drinking some tea and almost missed the message on the little tab on the Yogi tea bags.  It said,

Feel Great
act great and
approve of yourself

Its not a suggestion it is a statement. Its a directive.  I read it and heard a voice in my head tell me to
do this. So how does one do that when I am not feeling it.  I figured that if I couldn't find greatness in myself  at the moment I would look outside myself for inspiration and maybe that would point me in the direction I needed to go
.
I started listening to Radio Lab and the podcast was about Bliss.  It led me to this video

I have felt like this before.  I know I have.  I may not have screamed on the outside but inside I sure was.  Its not always this intense either.  You have to live in struggle,  which is just life really only that living in it means you are mindful that you are struggling and that you are still ok and moving foreward.  Stagnation is a sure fire way to make sure you don't find bliss.   You have to put yourself in a place of possible bliss.  Bliss is fleeting.  Its what we work towards and it usually sneaks up and surprises us.

In the midst of suffering is the potential for bliss.  I don't think its the only place to find it but it seems that its a reward of sorts but we have to be open to it.   When I am stuck in bed I want to be open to the moments of bliss that might find me.  I want to be in its path.  One of the key things to remember about bliss is that it is defined by us individually.  It might be this huge profound epiphany or a subtle shift in our existence.  There is no "should be" with bliss.

Where else do I put myself in the path of bliss is what I am asking myself now.   How can I struggle and risk myself, put myself out there to be available to bliss to happen.
Here is a random list of things that come to mind that I have experienced bliss.
The funny thing about bliss  is that each of those things on my list are different and seem so much more profound and life changing like the child births but the moments feel the same.  The intensity is just varied. 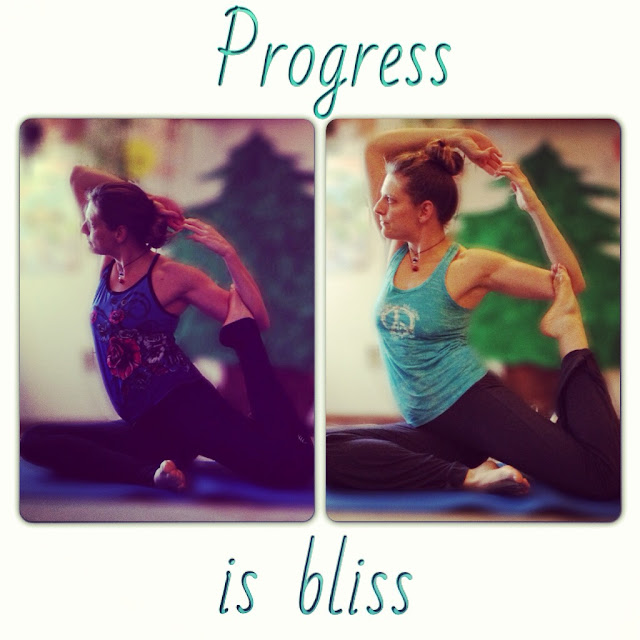 The photo on the left is the first time I was able to do this pose.   I did not at all think I could do it and when it happened I felt an overwhelming sense of gratitude, pure happiness, and such an intense feeling of satisfaction.  It was bliss. It choked me up and released something in me.   I had been working on hip openers for what seemed like ages and hip openers are emotionally as well as physically challenging.  Now when I do this pose I can tap into the memory and it adds to the meaning of this pose.

I will try new things and I will embrace my struggle as opportunity.  I will push myself to be better than I am now but still work to love myself as I am.  I will continue to put myself in the path of bliss.

When have you felt bliss?  I would love to hear your stories.

I loved seeing that picture of your progress in mermaid pose. I'm sorry that you've been in a bit of a funk. I have too and I can't quite shake it. I blame daylight savings :-) But I love that Yogi Tea Bag quote - it is a powerful directive. For me, I felt absolute bliss when I finally did a handstand over the weekend. YEARS of trying and anticipation for that moment of letting go and trusting my body.

beautifully said in so many ways. :) I understand the health journey, it's not easy and it's hard to know what to share vs what you want to share vs what really even matters. Thank you for continuing to inspire so many of us.

I saw your handstand post Christine and thought right away that you had a bliss moment!!!

Thanks for reading and commenting Amanda! You inspire me as well!