Yesterday was pretty rad.  I probably added 20 different ideas on my ongoing "things to blog about" note on my iphone.   Ideas were flowing, the weather was gorgeous, and I had energy.  I never know what I will feel like from day to day.  It can change throughout the day.   Yesterday was pretty much perfect.

We dropped Milo off downtown at the Central Campus where he and Sam attend block class once a week with the Home Instruction group.  Samson, the oldest spawn, got a ride with a girl he goes to class with and her family......the time has arrived that we start meeting the boys'  "girl friends" families.  Oi.

While they were at class I voted!   I voted!  I voted!  I was disappointed that there were not any signs around the downtown area directing people to the building where early voting was held.  We ended up walking a bit to get there from where we parked.  I walked and did not get tired. 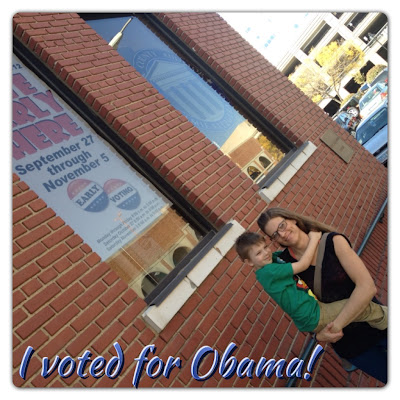 I had a huge smile on my face after voting and still feel that way today as I write this.  I wish that MORE  people would feel the same sense of accomplishment that I do when I vote.

I had anticipated standing in long lines to early vote.  I was pleasantly surprised that it was fast and easy to do.  This is a double edge sword in my mind.  Where were the lines of people waiting to get their vote in?  Does their early voting system work so well that there were no lines.  The people there were fast and efficient so it could be the case.   Possibly today will be busier after the debate last night.   As an aside, I did not watch the debates however I watched other people watching the debates on twitter and facebook and it was invigorating both in humor and fact checking.   I even followed Big Bird on twitter..... 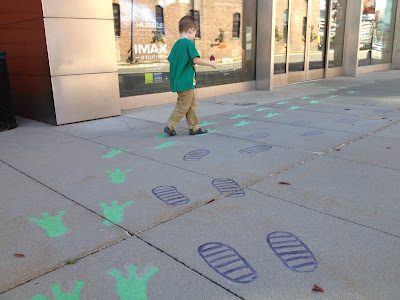 We had plenty of time after voting to take little Archimedes to the Science Center.  It was quiet and Jaymon and I both wanted to get back outside although the boy did have a good time.   For a while now Jaymon has been dropping the boys and I at the front door so I could could conserve energy and yet still get out to do things with the fam but yesterday I walked to the van.  I didn't feel tired but energized and happy and wanted to walk more.  This is huge.  So encouraging!!

I have to take it slow with the addition of exercise back into my routine.  If I do too much it could set me back instead of getting the benefits.  Even though I feel a fierce desire to move more I must use my intellect to keep myself from overdoing it.   An indication that the plan is working is when the desire to move and the energy to do it match up.

I had been thinking all day about sleeping.  So I was focused on the polar opposites movement and sleep.   I am tired of being tired and getting proactive about my sleep.  It is as important as any other aspect of health and one that I don't think of unless I am cussing the alarm in the morning.  The older I get and the longer I live without enough sleep the more I realize how much I love it and how much better my waking hours are if my sleep is adequate.

I did some soothing yoga in bed and turned the light out at 9:30.  I still read my book for another half our or so and was woken up by a spawn making noise but overall, I got more sleep.  I am excited to sleep again tonight!!  I want to perfect my sleeping skill and move more today.

Do you early vote?  Do you work to sleep better?
Have a wonderful day!
Cheers,
Angie Bee

I am starting to realize what a conservative following I have on my blog. Any time I post anything even slightly political, I get hardly any comments besides ones along the lines of "I don't understand how anyone in their right mind could vote for Obama." My point being, it is nice to see another running blogger that openly supports Obama. I can't wait to vote! I find it very exciting!