Pity Party day and sucking it up

Today has been a pity party day.  It started out with rain and gloom and although the rain is welcomed I felt like an old lady with my achey ankles from the cold.  I also have noticed that my eyesight has been weaker lately and even though I like my new geek specs it was getting to me that my eyes were bothering me.  I think its probably just normal aging but it creeps into my mind that vision problems are typical symptoms of MS.  Even though I still think that I am feeling better and on the path to recovery, there is still some fear that creeps up.  Even if I never get better that doesn't mean that fear can rule my life and I lost track of that today.

So looking at the photo below, I see that I have a pretty sweet life.  I may have had to alter my perspective but I have gained wisdom even though I have had to let go of other things.  I need to remember to count my blessings more often. 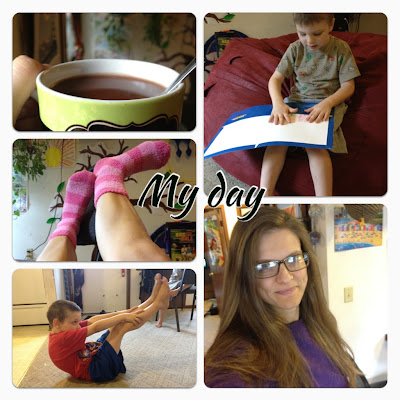 I sat out on the deck for an hour or so with the super hero this morning.  We saw two adolescent squirrels that looked like they didn't have much of a clue as to what they were doing.  We also saw a ginormous spider, at least the size of a half dollar, running from a black wasp.  The spider was running quickly through a dirt patch and was kicking up dust and spinning out loosing traction in the soft earth.   The spider ran up a tree and the wasp followed on foot and we thought it was curious that it didn't fly but ran on her legs.   A few feet up the tree as the wasp was gaining on the spider, the spider jumped off the tree and ran off.   We thought that the spider had escaped until about 10 minutes later we saw the wasp pulling the spiders paralyzed body back across the same dirt hill that we saw the spider running across earlier.  We had a live National Geographic production going on 3 feet from us.  Terrifying from the spiders perspective.  Nature is brutal.

Shortly after it started to rain and I get a call to pick up my new specs.  I like the geek look and they are nice and big.  My oldest spawn said they looked silly but what the hell does he know anyways!  Darn tween and his grumpiness.  If I didn't remember what it was like to be that age I might take his sass personally but I feel for him and am glad I am past those crazy hormones.

I also did some painting and then decided that I need to actually do that yoga that I have been saying I wanted to do.  To multitask I made it into a homeschool lesson and  Milo and I did two Cosmic Kids Yoga Adventure videos together.  I wrote a post about it here.   They were delightful and we had a great time.   I look forward to doing them again. 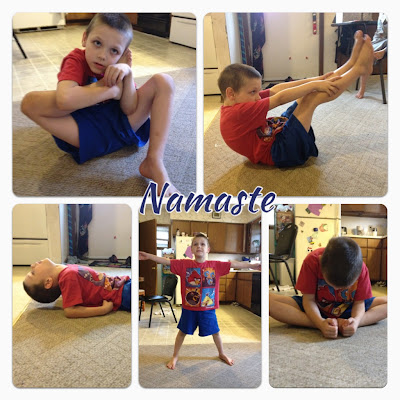 So, I say to myself, Suck it up Angie Bee and count your blessings.  The pity party is over. Things could be worse, and they have been.  If things get worse,  the dude abides and so will I.  Breathe and choose to be happy.

I hope you had a great Saturday!
Cheers,
Angie Bee

You're right Angie Bee, fear doesn't have to rule our lives. Just wrote about that very thing. Good vibes and positive thoughts your way from us both. :) Duncan.

Wise words, Angie.
I've been known to escape many pity parties. Now I am looking for ways not to accept invitation to those.

that's a beautiful photo of you. love the long, flowing hair. i agree pity parties can be damaging but don't beat yourself up for spending a small amount of time "there". you seem like such a strong woman... you'll always know when it's time to move on.