I have been working on this recipe over the last week.  I am pleased to say that I have yet to screw this up and make them inedible.  Quite the opposite actually.  Each batch has been very tasty!  Its not like I am a terrible cook or anything, its just that trying new things usually requires some trial and error to get it to work, especially when substituting ingredients. Not the case with these!
The recipe came about after looking around at vegan burger recipes.  I came across many that had cooked lentils but the one that stuck out the most was a recipe that called for sprouted lentils, of which I had already on hand.   I went with the general idea of that recipe and substituted the bread crumbs for flax seed and added kale and nutritional yeast. 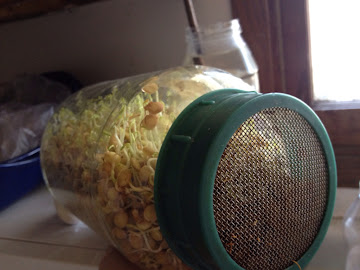 For the sake of this blog post, I will start with sprouting lentils.  Lentils are incredibly easy to sprout with a high ratio of lentils that sprout.  Soak about 1/3 a bag of lentils in a jar overnight.  I use a glass jalepeno jar.  Years ago I bought a seed screen at the health food store.  You could also use cheese cloth and a rubber band.
Rinse and drain thoroughly each day until the sprouts reach the desired sproutyness.  They are ready in only a couple of days.  I like to leave them longer for salads but its entirely up to you.
I have this clever food processor. Its a hand blender kit that has a container that the handheld blender attaches to.  I add ingredients directly to that.
As you can see it is about 3-4 cups of sprouted lentils then a cup or so of kale.  I chop the kale just a bit before putting it in.  It goes faster that way.
I have discovered the jars of minced garlic and use it for just about everything!  Garlic has antibacterial properties. It is used to control blood pressure and cholesterol levels.  It is a powerful antioxidant and I adore the flavor.
I added about 2 tbsp of the minced garlic to the mix.
Throw in some salt, pepper (I prefer the larger restaurant style black pepper)
Also throw in some parsley, a spash of apple cider vinegar, and about a 1/2 teaspoon or so of chipotle powder.
Grind up, or use pre ground flax seeds.  I put about 3 tablespoons of flax seeds in the coffee grinder and then pour the flour on top of the other ingredients.  I believe the ground flax is key to the burgers keeping their shape.  Flax seeds have a nice mild flavor that mixes well with the other ingredients.
Last but not least 2 tbsp olive oil and 4 tbsp nurtitional brewers yeast.
If you have not yet tried Nutritional Brewers Yeast, today is the day to try something new!!  It is jam packed with nutrition as well as protein. Two tablespoons gives 14 grams of protein and its just loaded with B vitamins and minerals.  We add "nooch" to everything.   This is what keeps me from going insane with worry over my super picky eater Milo (6).  He will eat nooch and loves it.  The whole family loves it.
This is the brand we use.  We get it from our local Hy-Vee store but iHerb is a great site too.  Look at the site and it gives you a break down of the nutrition. 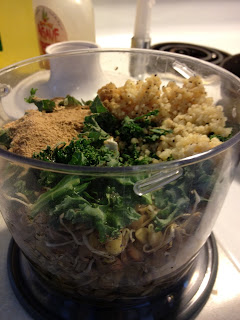 I add a splash of water throughout the time I am mixing this up.   You want it rather dry but it won't mix unless there is some liquid.  Don't let this discourage you though.  Remember, I have not been able to screw it up!

The first time I made these I placed some of the mixture in the cast iron pan with some olive oil and cooked on each side until it was brown.  It tasted pretty good but was way more work than I wanted to put into it.  No to mention the mess of cooking the patties in oil.

I discovered that putting them on a parchment paper covered pan and then baking them for 25-30 minutes at 350 degrees takes far less time and energy on my part and they come out beautifully.   They hold together like a cookie only these don't crumble.  I was shocked at how well they stayed together after baking them.  They hold together as though they had eggs in them.  So I am left to surmise that it is the ground flax that had the hold-its-shape effect. 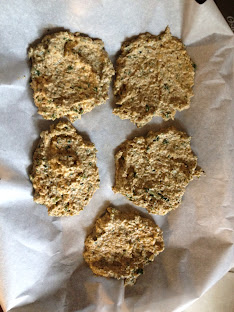 The above photo is the burger mix on the parchment covered pan.  I use a countertop convection oven to bake with.  It was $80 at Walmart and we have not turned on our regular oven since.  With the weather being stupid hot we took the counter top convection oven outside and run it outside to keep the house cooler. No reason not to bake just because its too hot out.  Can't do that with a regular oven!! 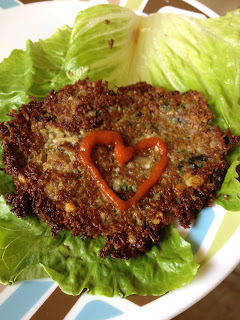 This is the end result (cooked in the cast iron skillet) with some Sriracha love on top.  My oldest spawn loves Sriracha but for the younger kiddos its ketchup and mustard.  I was missing having pickles when eating my burgers.   The sprouted lentil burgers are yummy just snacking on them or made up like a burger.   Sam likes to crumble them up and eat them on rice. 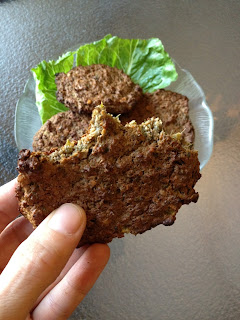 This photo is the end result after baking the burgers.  Not oily at all and holds together without crumbling!
The chipotle powder gives it a nice smokey flavor with a hint of spice.  I have to be careful not to add too much so its not too hot for the wee fellas but I sure love it!

Picky Milo did eat some burgers although he is still pretty picky.  So four out of four spawn tried and liked them.  Three of the four will eat them with out coercion, and the oldest two, Samson and Jupiter, eat them willingly and with gusto!  That is if there are any left after I get to them. 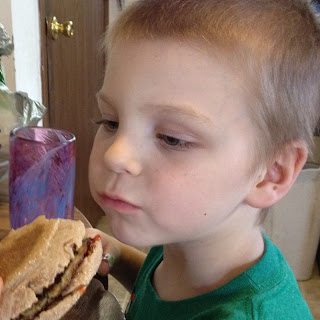 Happy Vegan Vednesday!  Did you go vegan this fine day?   Do you participate in Meatless Mondays?

Those look incredibly yummy!!! I fear I'd screw it up though :/

I would be really really surprised if anyone could screw these up! Seriously just throw stuff in a food processor and then mix and scoop out and bake. It takes 10 minutes to prepare and 30 to bake!

I made sweet potato and black bean burgers last night! I am excited to try sprouting some lentils and whip these up!

These sound SO good!! Right on! I just tested and played and tested and played and made vegan 'chicken' wings with a Thai sticky spicy sweet sauce. They were out of this world. With the types of things you look like you try it made me think to mention these wings.
Thanks so much for sharing your burgers!
PlantBasedDietAdventures.com

Yes to all!! I can't even think of eating meat~

These look delicious and I can't wait to make them! Thanks for the recipe. I'm going to try my hand at sprouting too. :)

Tried these today in an effort to use up some sprouted lentils that were getting out of hand, and turned out GREAT!!! I probably only had about 2 cups or maybe slightly more of them, but it turned out great. Used Spinach in place of kale, chili powder in place of chipotle, and did about half and half of ground flax and ground salba (chia seeds). Also didn't have any nutritional yeast, so I put in a bit of parmesan (we're not actually vegan, so it was fine with us). Not bad for throwing it together at the last minute and for having to substitute nearly half the recipe for things I was out of stock of! This turned out so great and will definitely be a frequent recipe for us! Thanks for the awesome idea!!!