Oh bread how I have missed you.

I feel like I have some solid energy.  I have not felt like this in a long time.  It makes me want to run to test out the sustained energy!

For a bit of background, I gave up gluten close to 3 years ago.  When I ate gluten I would feel emotionally and mentally unstable like PMS all the time.  I would feel "off" and unbalanced.   I also gave up dairy and soy.   Recently I reintroduced dairy and drink a kefir daily.  Many of my stomach issues have disappeared.  I think its from a healthy flora having been reintroduced in my gut.
Now 3 years later I tried bread from a local bakery.  Its a simple french bread with the basics only to keep the reintroduction clean so I can be as sure as I can that if I feel crazy then I will know its from the flour. Flour, water, yeast, and salt.
Earlier this morning I couldn't stay warm and was crashing pretty hard.  My stupid Aunt Flo came to visit and she always kicks my ass. (the upside since there has to be one is that I am not pregnant and she was on time.)   Its like the rest of my body just can't take the stress and hormonal upheaval. I think its the reason I am inclined to eat more before my period.  My body knows to store up some energy and nutrients to deal with whats to come. 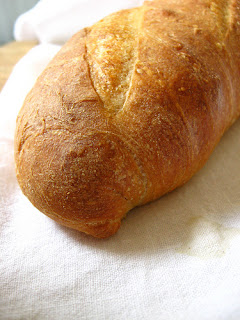 I ate some bread and am now warm and full of energy of which doesn't feel like a spike but long and sustainable.  I was pretty nervous about trying bread again.  My son Jupiter, who has autism, has done really well on a gluten and casein free diet.  It has been the most profound treatment that has worked for him. So I knew how to do a gluten free diet.
It was not my idea and the superhero has been suggesting I try bread again for a while.  I was really holding on to the notion that I COULD NOT eat gluten.  I think I might be changing my mind.  Its lovely how I have these ideas and teeter on the edge of making a change and then Jaymon comes along and gives me that little push I needed.  We make a good team :)
Evidently my body has healed.  I won't make a full assessment for a few days but so far so good.  I long to make my own bread and pizza!  I tried years ago to make my own outdoor bread oven but bailed on it half way. Maybe someday I will get one made and I will wear a tank without a bra when I make mine too. 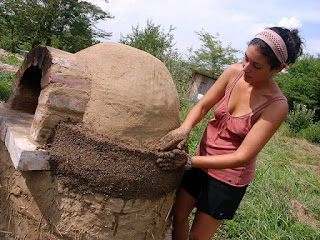 Here is a cool link Traditional Oven.com
Who makes their own bread?  Do you avoid gluten?  Anyone made their own traditional oven?
Cheers,
AngieBee

My husband is the talented one in the kitchen at our house and he's made bread before. It was just plain white bread. While it was exceptionally good it was cheaper (and a lot less time consuming!) to buy the bakery fresh loaves at the store. His sourdough bread, on the other hand, was definitely worth making at home!

I think one of those ovens could be dangerous. Not from a safety perspective, but that we'd be making pizza every night! Home made pizza dough is to die for.

I am a bread freak! I love it. I don't think I actually go a day without it. Homemade bread is the absolute best but I buy mine from the store because I'm just not that cool.

French baguettes are the best! Nice way to reintroduce yourself. :)

Even a celiac who goes gluten-free may be able to tolerate wheat after a period. But the symptoms come back.

I've finally gotten to the point where if I eat a little wheat by mistake I don't have spasms. But I still avoid it as best I can.

It nearly killed me, and I've got no desire to go back.

Trading bread for bacon was a fine trade. :)

Thanks Tuck for the info. Its tricky to eat!

I don't think it was a lactose intolerance but leaky gut. I think it has more to do with the proteins and not the sugars.

That said I am hopeful yet dubious that this will work. I am crossing my fingers and toes though :) Even if I could eat it a couple times a week would be an improvement!

I am actually cutting back on the meat. Its too expensive to buy "clean" meat so I am cutting it out for the most part.
Bacon is pretty yummy though :)

I love making my own bread but honestly I don't crave it like I used to now that I gave it up.

I have to say, that of all the things to give up, gluten would be hardest for me! Love me some good bread and good, high fiber cereal! I don't bake any, though--I have decided I am much more a cook than a baker.

I hope it goes well for you!

Ooh, just found your blog! I'm weaning down my shoes (and love my barefoot miles on the track). I run up to 10 miles in my NB Minimus(es) and have been seriously looking at the zeros - I think I'll give a pair a spin.
Bread?? Can't do distance without bread - blessed with a gut of steel. I absolutely adore making my own bread (much appreciated by my friends and family) in any grain I can get my mitts on. There's a little magic in getting the dough just right ... love it!!

i have a few friends who swear that they can eat bread in france, but not bread here in north america...how they process the wheat or something is different. there is one bakery here in town that makes amazing french style baguettes and they don't bother their stomachs at all - just an interesting thing!

on another note, i am sensitive to casein as well...i was wondering if it's been hard to find casein free/dairy free foods for your son? a lot of "dairy free" prodcuts have casein in them....

We actually decided to forgo the GFCF diet for Moose. We talked to an allergist and dietician who were so helpful in answering our questions. We had another set of skin tests done by this allergist (different doctor) and these tests showed not one food allergy (compared to the last quack we saw who said Moose was allergist to everything under the sun). I've thought for a long time that most of the kids/ppl I've heard on the GFCF diet have had GI problems, but Moose never has had any. So idk but anyway. yum bread!!

I eat every thing, and can't even think about not eating anything.

Don't make bread, but do eat it; toast and peanutbutter / Jam, what about a salmon role... I could go on.

We bake some of our own bread products. I think it is one of life's greatest injustices that plain bread is not the healthiest thing ever.

i make the most delicious bread in history. flour, water, yeast, salt and a pinch of sugar to get it started. it is crusty on the outside, soft and moist with big holes on the inside...lots of good chew. i also make my own pizza crust because the store bought sucks. bread for me is a special occasion thing...some people have desserts only once in a great while - for me it's bread and products with gluten because i hate how it makes me feel. perhaps if i had one serving i'd feel differently, but thats a whole other issue. i think preservatives are bad and i think soy is the devil. think about it - you can't eat soy in it's natural state cause it will make you violently ill. something has to be done to it first, it must be processed. hmmmmm - if we were cave people, we would have let one person try it raw (like the rest of the plants, roots and berries we foraged) and found it sickened him. that would be the end of that. the phytoestrogens in soy mess with your hormone levels...very bad for the ladies. the higher your estrogen levels the more likely you will carry excess weight and get "female" cancers. soooo many bread products have soy letchitin in it...it's almost impossible not to have it unless you buy from a bakery or make your own.

I have recently given up bread, or I should say, however on occasions eat a piece every now and than, but nothing like I use to. I have found for me, I have a lot more energy. When I ate bread it just made me lethargic and lazy. I eat more protein and am feeling alot fitter and have a lot more energy than I ever have.

I make bread at least once a week and we all love it. It is almost the only time that we eat bread.
We also eat homemade pizza every Friday night. We bake in the oven and I am threatening to make an oven like the one in your picture. I highly, highly recommend www.pizzain5.com for artisan bread and pizza recipes.

Thanks for the link Staci!
Post pictures if you make an oven. I would love to hear about it!

I tried to go gluten free, but failed. What I learned, however, was that some forms of gluten make me feel worse than others. Whole grain & ancient grain breads seem to be okay on my system. Regular pasta is not good & I prefer rice noodles. Good learning. Good luck with your return to gluten.

OK, Angie. I gave gluten a chance, inspired by you.

Here's how it went.

We used to make our own bread - back when bread machines were all the rage. Now we make some pizza dough, tortillas and occasionally bagels. I don't eat a lot of bread, but it would be difficult for me to give it up completely.

Hope it continues to go well for you!

Fresh bread sounds devine. So glad bread seems to be agreeing with you so far. ::hugs::

Hey Angie, I've tagged you for 11 random facts and answering 11 questions! Rules/details are on my 1/26 post!

Happy it's working out for you!! I buy most of our bread, but I have a bread maker. The problem is that it takes over three hours to make, and I get nervous if I leave the house while it's running. I'm always afraid the dough it going to explode : )