Where would you go?

I love jeans, sweatshirts or sweaters, boots, hats, and all the cute cool weather clothing.  I don't however like being encumbered by layers.
This time of year I daydream of warmer places as the hell that is a typical Iowa January/February inches closer. 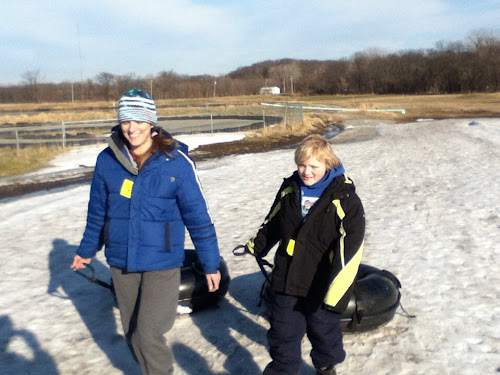 Don't let this photo fool you. It was taken this weekend while we took the boys tubing at Sleepy Hollow Sports Park where the snow is made and it was  too hot in the coat and layers in the warm sun.  We had a blast by the way and the communication opportunities for Jupiter were awesome and little Milo was independent and brave.
This weekends weather was a tease. I just know it.  It was a cruel trick, although non the less appreciated.  Granted it has been tolerable and dare I say it,  a nice winter so far but there have been stupid cold days of daydreaming in blues and greens of places that we could move to that would offer a Mediterranean climate. 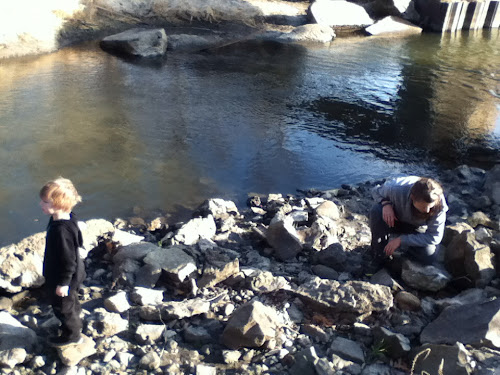 yes Iowa is beautiful and the weather can be lovely and in fact is for most of the year.  It's those days of single digits that get me.  We took the boys on Sunday to the creek to fossil hunt and throw rocks and I felt the complacency creep in and take hold.  The belief that maybe this year won't be so bad....maybe it won't....
We have tried many if not all of the autism programs here in Des Moines for Jupiter.  That's why we moved here at the advice of our autism consultant we worked with in Kansas who moved to Des Moines.  Some of the programs have been life changers and some, meh, but we tried.   It seems as though, in my mind, that it is coming close to a time when we could try something new.  I've got the travel bug and usually do this time of year.  I am not a tough it out in the winter kind of girl.  There is no shame in running away from this battle!
If there were lots of green to offset clouds and rain in winter I think I could hang but with damp comes mold.  Will that be an issue?  Every place will have pros and cons.  I would love to take some trips to check out some places.  Hey Amtrak, want to sponsor my families trip?  I would blog about our adventures!
So far in my Google Earth trips, image and wiki scouring , and forum hopping I am always drawn back to the west coast.  I grew up in Northern California so it's in my soul,  that smell of the redwoods and salt air.  California is expensive though so that makes a difference but Santa Rosa as well as Monterey look awfully good, minus the seismic activity, but oh that coastline is sublime.
What I want are as follows
If you could move your family anywhere, where would you go?
Cheers,
Angie Bee

I think you are describing Portland, Oregon. Seattle would be good as well, but a bit more expensive.

That description is straight from the Portland, OR Visitors Guide, isn't it?

i'd move to north carolina, all day. lets go. but we're not talking about me. i think oregon - you could get a reasonable place to live near portland or eugene, it's liberal, not too cold, and prolly great services for jupy.

So you know what No CA offers - all you want except for the reasonable cost of living.
C'mon move to CA. We'll be neighbors :-)

*raising hand* ooh ooh!! Come live by me!! As far as affordable its MUCH better than the bay area. Its not super liberal but there's a cool liberalish dowtown. Its the valley so it gets crazy hot in the summer and foggy and cold 25-30s in winter. we live close to the foothills and folsom lake which is beautiful. lots of trails to run on. A good friend of mine is a music therapist who works with autistic children. I'm currently working on a website for her. Girl! you should totally move out here! I'm in rocklin but you can look in auburn, or sacramennto areas.

This is one I think about quite a bit. I love Md for its progressive thinking, interesting people, fairly active community and access to beaches, mountains, other big cities. But. I hate winter. Winters are fairly mild here, but any snow sends this place into a frenzy.

For me, the answer is probably the southwest or Colorado (I know, they have snow, but it's different). The mountains really call to my spirit and I think I'm supposed to be a trail runner, too!

Check out San Jose for programs for the boys.........sister lives in Gilroy. Beautiful winters..... still lots of farming communities. Check it out! Ask the Chamber of Commerce of any town you are thinking about for their packets...... that gives you a broad idea of what they offer!

well, apart from the wet in the winters, Bend or, could be a good choice. i know that is where i want to go :) http://www.ci.bend.or.us/

I'm going to go against conventional wisdom, and say that our COL went DOWN significantly when we moved to Southern Cali. Our opportunities for outdoor (read: cheap or free) activities abound; produce is incredibly cheap, and hence makes up the bulk of our food budget; car insurance, utilities, medical insurance went down; rent went up, but only because I picked a residence in an excellent school district on purpose - I'd say our quality of life here is way better than when we lived in FL.

Come and live on the Surf Coast just out of Melbourne in Oz :) It's got what you need, or the south coast of NSW is also pretty nice....

I'm on the wrong coast for you. Bummer! Although where I live is beautiful, it lacks a lot of the things you want. BooHoo.

We have too much snow and rain but lots of green! Low cost of living but not very close to bigger cities.

My family took up snowboarding as a way to cope with our winters. We've all fallen in love with it. I wouldn't give up the winter for anything! If I could go anywhere it would be where I could snowboard lots and run on trails in my bare feet. Do you think that's asking for too much?

We just moved to Phoenix, AZ. It IS hot as hell in the summer, but the other 8.5 months are perfect. Barefoot running in 45-60* weather all winter long? Yes please!

If I could live anywhere I think it would be in the beautiful, lush parts of New Zealand.

Alright, so fill me in on the differences between KS and IA autism treatments (programs?).

The Superhero lived in Eugene Oregon when he was in Jr. high and remembers it fondly. That's where we have been thinking of. Eugene is 1 hr from Salem which is the capital then Portland is just another hour north from there and it's a straight shot up the valley on highway 5. Also only 50 minutes from the coast and the pacific coast is something else. I have not experienced the Atlantic coast other than from Battery Park in NYC and that was just technically seeing the Atlantic.
This is the time of year to watch and compare the weather.
The issue with Eugene is that it could pose some nasty allergy issues for me. It is the grass seed capital of the world and the wet may be an issue with mold. My allergies are minor if not nonexistent most springs but for 2 months in the fall they are terrible. I can hang with the same amount of allergies given the wonderful gains I would get but I don't want to be miserable for more than 2 months....maybe three if I could have access to cherries and blackberries :)

Shel, North Carolina is too far in the south still. After living in Kansas for so long, I have gotten spoiled by a more tolerant state here in Iowa.
I was considering and in daydreams consider Connecticut while fondly remembering watching Who's the Boss. It seemed like a whole other world on the east coast and who didn't leant to be Samantha :)

Ewa and Zap, you gals would be just a day trip down highway 5!

Ewa you are in San Jose right? Now I can't remember.

Zap, That looks like a great area. I want to be a little closer to the coast. maybe Santa Rosa but it's more expensive there. It's where I was born actually.

I have considered New Zealand Randi! It is not as poisonous as Austrailia from what I have read.


I looked into Santa Fe NM and Phoenix but I do want a winter of some kind and I do like the Forrest's of NM it's not quite green enough.

I live in Eugene and absolutely love it here. Running capital of the world... lots of lovely beautiful places to run and tons of runners. I've even seen a few barefoot runners, but they could probably use a fearless leader. :)

Allergies are definitely an issue though. I don't personally suffer but I have some friends that are absolutely miserable for a large portion of the year.

As far as placement in the state and access to everything within a short drive, you can't go wrong.

I was thinking that the east coast would work for you, although it's so expensive, that's why we moved away from NYC. I really like where we live now, just a few hours drive from major cities, lakes for the summer, and snow for winter. Which we have zero of right now, which is bizzare!

Laurie!! That is awesome that you live there :)
It seems like its perfection for sure but I am really nervous about the allergies. When is a good time of year to visit to see if I am allergic?

Molly, I think I would love the east coast but sooo many people and expensive. I could totally see myself later on living in NYC for a few months out of the year in the winter and rent a place.. I could see NYC at Christmas time would be lovely.

I would like to live in Ithaca, NY perhaps...right now I live in St. Petersburg, FL where it is currently 70 degrees. But it does rain...not as often as people think. St. Pete is liberal, but stay away from the rest of Florida. Oh, and it is cheap here.

As far as visiting for allergy testing... pretty much anytime from early spring through late fall, although spring is the worst I believe.