Just now the thought occurred to me to  start doing a foodie Friday post. Yes I know its not Friday but alliterative inspiration comes along at random moments and I take what I can get so maybe next Friday it will be foodie Friday.

Yesterday I did post a food rant so that sort of counts. Today I woke up still not feeling well digested so I started to cook after doing the Sun Salutations that my clever hubby suggested I do.  Those Sun Salutations are magic! The cooking was cathartic and relaxing. 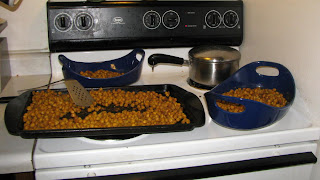 I started with making another batch of rice milk to make Milo, Archimedes, and Jupiter banana rice milk smoothies.  Archimedes is a fabulous eater. He will eat anything and everything.  Jupiter is a close second and Milo, oh Milo, he is the picky eater.
He wanted crunchy curried chick peas.  The garbanzo beans were cooked a couple of days ago and needed to be finished and I needed the space in the fridge for the turkey I was going to cook so curried chick peas it is.

I used 2 bags of garbanzo beans and boiled them until tender.
coat with oil after draining and rinsing. I used canola.  Add salt and spices to taste. I love curry powder and cayenne.
Bake in the over at 375 for 45 minutes or so.  I had both dishes and a sheet pan in there so I baked longer than the recipe from SSB.
The recipe for the chick peas comes from Maggs at Sun Safety Barbie.  I modified them by adding spicy curry powder an upping the temp.

I love my blue baking dishes! I think I won them from Molly at I'm a Sleeper Baker but I can't remember for sure. They were from CSN stores and are fabulous with their groovy color and handy handles. 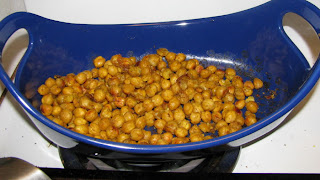 While I was working in the kitchen, Jaymon was tending to his tomatoes and beans in the garden of which he lovingly refers to as his girls.  He shared these with me. 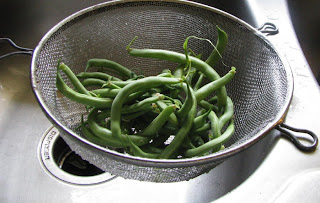 I can't wait for the tomatoes to ripen so I can have tomatoes, hummus, and basil together.  I could live on that combination!
Has anyone ever made chocolate covered apricots?  They are food from the goddess herself!! 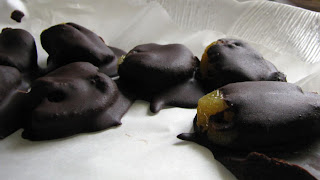 To make, melt unsweetened bakers chocolate in a double boiler or use a metal bowl inside a pan half filled with gently boiling water.  Add a bit of oil of your choice. Coconut oil is lovely however you can use olive or Canola. About a tablespoon should be enough. I then added around 3 tablespoons of sugar.  Its the only sweetener I had on hand. Someone ate all of the brown sugar and it wasn't me!  It takes about 15 minutes to melt. Restrain yourself from stirring until you are sure that the chocolate is melted.  If even a drop of water or moistures gets into the chocolate it stops being creamy and becomes grainy.  I am not sure as to why this happens but it sucks so don't stir!

After the chocolate is melted,then you can stir it to mix. The chocolate will retain its shape so wait a good 15 minutes before testing then cover anything and everything with it!! I used chopsticks to get the apricots in and out of the chocolate and I placed them on parchment paper covered plates to put in the freezer.
I also covered, dried blueberries, dried cherries, raisins, and decaf coffee beans. As far as sweets go, this is actually pretty low calorie and it HITS THE SPOT! 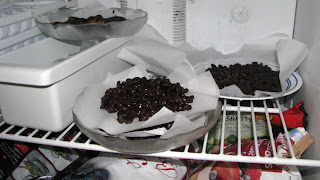 Here are the plates in the freezer. There are also two bags of frozen mixed berries, two bags of Asian Stir Fry veggies, frozen bananas, and a placenta. Any home birthing momma out there will appreciate this!  It has yet to be planted until we move to a place we own and I can plant it under a tree or something like that.  My midwife asked what I wanted to do with it after she arrived late for Archimedes birth. I was so busy cooing over my new boy that I just gave her a Tupperware tub and said to stick it in the freezer and there it lives to this day.
About the reason for the refrigerator photos, there is a bloggie thing going around where you post a photo of the contents of your refrigerator. MissZippy tagged me to show the world my fridge and instead of cleaning,  I cropped so you  can't see how long its been since its been thoroughly cleaned. I was probably out running on that scheduled cleaning day! 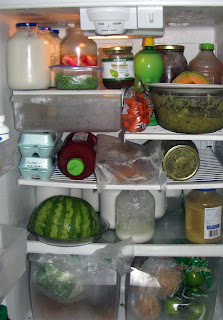 There is a jar of radishes in water next to kefir and homemade rice milk. There are some peas next to Atchara. Atchara is fermented green papaya in raw coconut water vinegar. Tropical Traditions sent it to me to try and I really like it. Its strong but it does aide in digestion.  We store most of our foods that go in the fridgalator, as Milo would call it, in half gallon pickle jars.  There is a jar of black bean burrito mix, potato salad, watermelon, granny smith apples, jicama, V8, applesauce, homemade guacamole, carrots, eggs, a head of each green and purple cabbage, and baked sweet potato fries. Now there is roasted turkey in there too.

Jaymon is still nursing his injured knee so I have been on a cooking rampage. We usually share the duty however I have to opportunity to go all out!  I think its time for black bean burgers next and hummus as soon as the tomatoes ripen. In addition to all the food I also prepared five half gallon batches of kombucha. Its been too long. My SCOBYs seem to be alive and thriving.  The tea I made was a bit too weak so I am not sure how it will turn out. 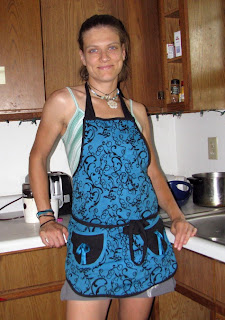 Hot sticky momma in a cute apron. The apron helps. I am notorious for ruining clothes while cooking. So,in high turquoise and black fashion,  I have turned around my attitude and embraced my limitations again and hope to inspire as I do so!
Happy eating, happy running, and happy fourth of July friends!

I love me some fresh beans. I need Jaymon to come down and set me up a garden!

Everything sounds delish- well, except the placenta lol! But, I had one in my freezer for a few months too =)

youre right choc. covered apricots rock! and i love that you ended up covering a bunch of other stuff in chocolate.

Chocolate covered anything is great!

You're so lucky to have fresh veggies on hand like that. The beans look delicious. And, that is one impressive looking fridge. I have to work on mine.

and you're rockin' that apron girl!

You are SO cute in the apron! I love that you were so productive and did all that, fantastic. Can you send some my way? :) Happy weekend!

Everything looks so delicious! Love the apron too. I am also a very messy cook. Thanks for all the great ideas.

Everything sounds great! Maybe instead of Foodie Friday you can do Saturdau Sustenance? Enjoy the holiday weekend!

LOL at the placenta. Beer Geek freaked after Shoo was born and made the midwives dispose of mine.

You look very fetching in your apron, wish I could get my cook on like you, I got a long way to go, but you know what those chocolate covered fruits could just convince me to also put on an apron!

These look like some great ideas - thanks for sharing! Cute apron. ;)

oh how I wish I was at your hosue right now! All those dishes and homemade Kombucha....you win mom of the year!

BTW, you are looking hot in the apron!

I've never had chocolate covered apricots, but I'm sure it would taste delish!

hello! I like to be a part of your forum. Thanks