Oh early mornings, I should try harder to be your friend but when its a choice between facing you or my nice warm bed snuggled beside 2 very warm little spawn.....
A late start but a start none the less and out the door I went to Gray's lake for a longish run.  Eight loops around the lake equal 15.25 miles according to google earth.
I was not really "feeling it" today however it wasn't an epic inner battle either, just kind of "blah, lets just keep moving until its over" sort of run. 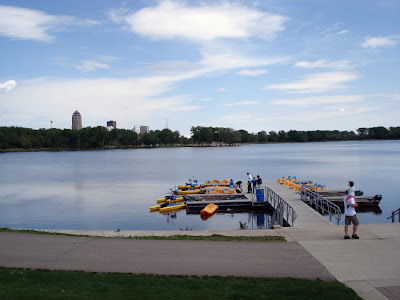 Beautiful morning!
I have a sore right heel and have felt this before yet on my left foot. I don't think its anything to worry about and will go away soon. I think its over stretching from the hills yesterday.
I have been watching the two latest episodes of Doctor Who and reading race reports during my breaks from programming on Jupiter's dynavox communication device.

I am at 398.88 miles so far this year. I am only off by a couple for my goal to still get 100 for April even though it was a rough start to the month with the dear one being gone the first week and a half.  Its an awesome feeling to see those numbers shoot up after a long run!
Happy running!

It sounds like you've got a gorgeous scenery to run through.. I wish I lived somewhere else.. Kansas is just not very fun, its pretty boring! :)

Lots of neat experiences on your long run today. Things most people would never think about or appreciate. Great total mileage for the year so far!

Sounds like a lovely place to run! Good job getting the nice long run in!

A longish run? 15.25 is a LONG run! :) That is so awesome that you do it barefoot. The lake looks like a fun place to run around. I'm so glad the rain held off until you were done.

Sounds like so much fun. But I gotta ask the most naive question: how on earth do you avoid stepping on sharp things? Or have you just developed such thick soles that nothing hurts? I contemplated running barefoot yesterday because it was so warm, but you know, even stepping onto our driveway hurts at times.

hi, just found your blog. i'm running my first barefoot 5k at the end of may. my good running friend runs barefoot, he ran his first barefoot marathon yesterday. so far the longest i've run barefoot is 1.5 miles, half way there :-)

Sounds and looks like a lovely run! I love the sound of running through the water--what fun.

Sea Legs Girl,
Its a very common question and surprisingly the answer is simple. Most all things that you want to avoid stepping on you just avoid them. Little pebbles are annoying and glass is easy to spot as well as other things in the road. The roads and sidewalks are cleaner than I would have ever thought. When I ran in shoes I didn't really pay much attention since I didn't have to watch where I was going. I don't run on gravel much unless its small patches on a route and then a light step keeps it manageable.
My soles are not really thick but like a sort of soft suede. The sensory feedback is not as shocking as it was when I first started out.

I always feel sluggish before rains or storms come. Still it seems you had another cool run.
Why do mothers bring kids to parks and then tell them to stay out of water?

So excellent. splashing through water . . . loving that.... oh and the unicycle sighting. ;)

Thanks BAB! (Can I call you BAB? :)) You have inspired me to give it a try. I decided the pinnacle of existence might be to run an ultramarathon barefoot while 9 months pregnant. If I ever become pregnant again, I'll have it in the back of my mind.

I feel bad for the little man who was jealous over your splashing!

There is nothing better than beating a nasty storm!

I want a pair of the barefoot running shoes! They look so cool! Nice job on the run, and glad the weather behaved until you were done :)

Thanks for you entries into the giveaway!

Hi Angie,
Wow, it sounds like you had a great 15 mile run around the lake:) The splashing in the water must of been refreshing! Have a wonderful week girl!

I love running by the water, it always feels really soothing!

You and your feet amaze me! Glad you got the miles in. Nice job beating the storm although running in the rain is sometimes great.

I love that you pretty much memorized which dogs you saw during your run. Good job on the mileage.

Following them on FB.

Sounds like a great run, long run :) Isn't it great to have nice weather to run in?

I havne't been to grays lake in a while, but every time I have gone it has been a blast.

I literally LOL'ed at the thought of the kids going "awwwwww" when you splashed in the puddle. Bet that felt good on the feets.