My friend Brooks came through Des Moines with his sister the other day and was kind enough to be a guinea pig for me while I practiced this coaching thing of which he and his sister did a stellar job!   I try and keep the coaching session short and sweet so as not to induce stress with too much new information but there is so much cool sciency stuff its hard to keep my mouth shut!     So to make up for it I decided to get my potato salad recipe lined up and written down for my buddy Bjorn who asked me the last time I saw him about a year ago for said recipe.....yeah, I said a year..oi.

Potato salad is hard to screw up, not impossible, but its a pretty fool proof dish.  I didn't come up with a recipe per se,  I just took what I knew and liked best about potato salads and threw it into a bowl.  I am not a fan of creamy potato salads so I came up with two versions that were inspired by my mother in law and the way she cooks.  She uses lots of herbs and olive oil.

Potato salad is the perfect summer food.  It's cold, quick to grab on the run, and doesn't take much time to prepare.  Since being gluten free, I like to eat some carbs to fuel up and potatoes are an excellent choice for me since bread and pasta's are out.

Pickles and peas please potato salad
This one is pure awesomeness with a splash of simplicity and who doesn't like pickles!
Ingredients:
potatoes
salt and pepper
dill
sometimes I use mustard powder if I have it
a bag of frozen sweet peas or better yet fresh summer peas
dill pickles chopped
a Vidalia sweet onion
olive oil, I prefer extra virgin
apple cider vinegar

I like the red skin yellow potatoes we get from Sam's club.  Chop and boil until just a little soft.  I rinse mine in cold water to stop them from continuing to cook. While the potatoes are cooking finely chop the onion and pickles.  I like one onion and lots of pickles.  About 5 minutes before the potatoes are done, steam the peas.  I like my peas to burst when I bite into them so a brief cooking time is best.  I also rinse the peas in cold water.
Mix peas, potatoes, pickles, and onions in a large bowl.  Dump in some olive oil and apple cider vinegar.  About 1/2 cup or more vinegar and enough oil to coat everything.
Salt, pepper,and dill add by taste.   Then either eat it now or chill for later.   Potato salad gets better with age as the flavors marry.


I don't have any pickles or peas at the moment so I made the  "its all good" version for photos.  Brooksie this is the one you had.

My 9 year old rock star son Jupiter, who has autism and is nonverbal, has been hanging out in the kitchen lately and spontaneously putting dishes in the sink, putting groceries away, and watching while we prepare and cook food.  So I decided that he could learn how to wash and cut potatoes. When I asked him if he wanted to learn he jumped up and said Yeah!

Jupiter washed and chopped about 8 pounds of potatoes and did so with great care and enjoyment.
Best.potato.salad.ever. 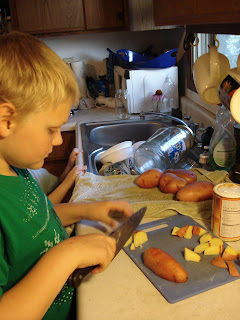 I love how he and I found something useful and fulfilling for him to do that gets the interactions going and yet he is learning life skills that can be taught by imitation and not having to rely as much on words.

"Its all good" potato salad
This one is just as good but gets those veggies involved in the fun.
potatoes
salt and pepper
rosemary
dill
Asian style mixed veggies
apple cider or Balsamic vinegar
a Vidalia sweet onion
extra virgin olive oil
I like to add extra water chestnuts and pickles if I have them

The directions are the same as above for the most part.  Cook Asian style mixed veggies instead of peas.  I also used balsamic vinegar instead of apple cider although its great with either one.   The rosemary softens as it sits overnight so I do like this one better the next day.  Same amount of vinegar.  Half a cup for sure but I end up using more.  Its all about what flavors you like. 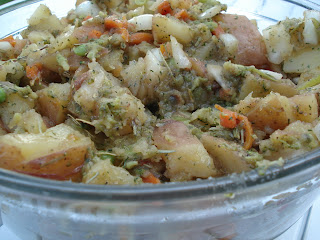 I overcooked my veggies as I was probably on facebook or something but they still taste yummy.  I also used Balsamic vinegar so it has a darker look and not as pretty as when I use apple cider vinegar.  You can see lots of dill, rosemary, and pepper!

Thanks to Jupiter for all the help and for Bjorn for the inspiration and guilt to get this posted!
Cheers,
Angie

This is better than the black bean burritos, and I am a huge fan of those. I just want you to know where this stands with me, Angie.

It's just crazy how good this is. I will let you know how it turns out. :)

Made the first version last night...it was AMAZING!! Thanks so much for sharing this recipe..bookmarked!