Most people have a love hate relationship with facebook.  I have felt that pendulum swing as of late and had to completely start over with my Barefoot Angie Bee page so.....go like it!!  Also if you like the new page you get an extra entry into the Mondetta Giveaway.  Make sure you tell me you liked it on the giveaway page comments to get that extra entry.

In other more fun news, I took all four boys to the Easter Seals Walk With Me event last night. Yep, by myself.  My kids are awesome and they proved it to me by being so incredibly well behaved. This is not always the norm  but they made me forget that last night.   When I asked Milo (5)  if he wanted to run the tot trot race he screamed yes and started jumping up and down.  Apparently the kid likes to run and this was after he danced for a good 30 minutes straight.

So off came all their shoes and they got in the lineup to race.  Jupiter, my son with autism, decided he wanted in on the action too.  This was awesome in that he got in the line up to run with the other kids all on his own. All of my spawn including Jupiter have been carrying around their little trophies from the race.

I hope that he is able to attend Camp Weekends in the fall.  He is too busy to go to camp this summer and he is missed by many of the camp counselors that came up and said hi to him and said how much he had grown and were amazed at his progress in the couple of months since they had seen him last.   Jupiter also stood in line and waited for a balloon dog with his brothers and said that "Yes" he wanted a dog and he chose the color.  That boy is doing so well!

I had a blast with my sons in this wonderful family party environment and got to see my fellow Sci Fi geek Patty who has a daughter with autism so we have much in common. We bitched and moaned about James Marsters not being the narrator of  Jim Butchers next book in the Dresden Files, Ghost Stories.  James Marsters or Spike from Buffy as many know him, IS Harry Dresden.  His voice makes the books perfectomundo.  Dresden fans would have waited patiently for Marsters to be able to narrate but no there were scheduling conflicts. Bunch of dookey if you ask me but I suppose I wasn't asked.  I am dubious as to a replacement for old Spikey, but I was dubious about Matt Smith being able to fill Doctor shoes and he has won my heart so I am optimistic.  Let your Geek Freak Flag fly here fellow SciFiers! 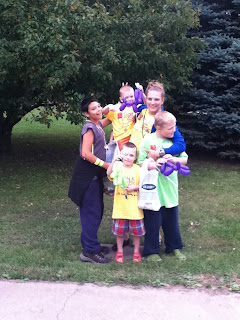 Here is a cute picture of myself and my four boy spawn.  They danced, got balloon animals, new little stuffed animal babies, candy, race medals and trophies, they walked around the lake, and played with lots of other people of all ages!   Fun Fun summer evening.   Now its time to get caught up on nuun stuff and get ready for next week.   Jaymon's sister and nephew are visiting for the weekend and we have an art show and drum circle on the agenda.   Hope you have fun plans for the weekend!

Jason Robillard is running Western States 100 tomorrow!  Go wish him well and then GO LIKE MY NEW FACEBOOK PAGE!!

I like you and now I like your page too :) I'm a huge fan of social media..used right amazingly powerful!

Congrats to your spawn! Fun photos!

Yeay, congratulations to everyone!

So glad Jupiter had a good day.