Omaha and a treadmill marathon.

x
I am trying to make this short and sweet since the sofa and some back episodes of Warehouse 13 on Hulu are calling my name!

My friend Erika just turned 40 and in true runner fashion she held a "Mama Goes Masters" virtual race.  She had several different categories for distance to choose from.   I had toyed with all of the distances in my mind and when it came down to it, I just felt like running.
I ran the race in Omaha in the exercise room of the Candlewood suites hotel I stayed at. (I just said wood, hehe)
Let me back up a bit. 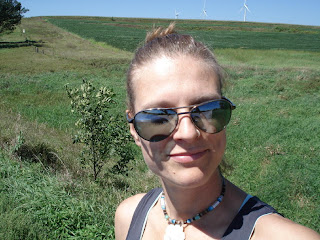 As I said in my previous post, I love to drive.  I especially love to drive while listening to an audio book while watching the lovely rolling hills dotted with dozens and dozens of windmills!  You can just make a few out in the background.  These bad boys should be everywhere.  The two hours and some change it takes to get to Omaha from Des Moines went by very quickly and I was in good spirits. As an aside, I have found the following list to come in very handy on trips.
Some essentials of a road trip are as follows 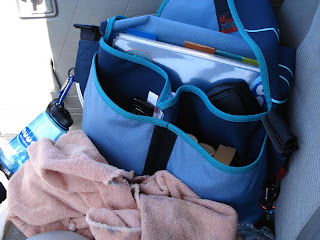 Of course you need clothes and toiletries but my weekend trips are pretty simple with a traveling dress , some running skirts, a pair of VFF KSO Treks just in case and some tank tops.  I was set to do 5 nuun samplings over the course of the weekend and I was going to get in some running at the lake not far from my house and hopefully do the 4 mile distance of Erikas race.
At 4:00 a.m. on Friday night I realized that morning running wasn't going to happen Saturday and I missed my family.  I did watch The Secret Lives of Bees and it kept me from being too lonely. Excellent movie and made me want to keep bees.  Its hard to be lonely especially when I miss my little fellas snuggling up with me.
To my surprise, on Saturday morning after sleeping in as late as I could before heading off to my first nuun sampling, I felt fantastic!  I had so much energy and was even chipper!   I decided then that I would run the 40k. I got that wild hair and was determined.  I would set the treadmill to 6.3 and just run for 4 hours and be done. Little did I know that TV on Saturday is total crap unlike on a weekday.
So I ate well all day and as soon as I got to my hotel Saturday evening I changed my clothes and gathered up my Treks, a handheld, some nuun, altoids peppermints (for upset stomach), my book on CD just in case, 2 bananas, 2 Chocolate #9s, and 2 protein bars.
Here I am ready to roll. 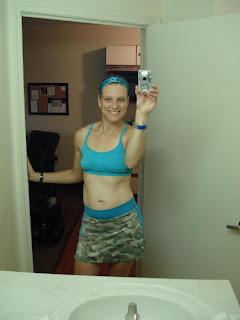 I started the clock at 8:20 p.m. and finished at 12:53 a.m.  I figured that since I just felt like running that I should just go until I felt like stopping and that ended up being 26.2 miles!   I have been torn up about having signed up for the Des Moines marathon in October and then having so much work come my way on top of anemia that I would not be able to get my long runs in.
Guess what came on the tube while I was running.......Yep, it was Forrest Gump!  He just felt like running and so did I.  I thought for sure that running a marathon would make sleeping easier and keep the loneliness at bay but no such luck.  I was still up until after 3.
Some highlights of my run.  It was on a treadmill for 4 hours and 33 minutes so really, how juicy can it be but heres the skinny anyways. 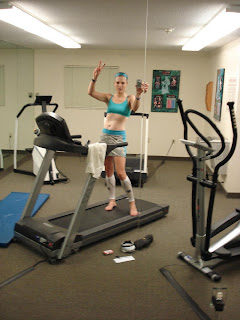 The picture above and to the right is me after finishing my 4 hour and 33 minute run.  I was a bit less chipper but have felt great since then.   My digestion is a bit slow and I am kind of swollen but not like my first over 20 mile run.  Its getting better and I am getting stronger.

Jaymon and I just got back from running 3 miles of hills in the cemetery and I feel like all the kinks have been worked out.
I am still stoked thinking that I just ran that far barefoot.  I find that running on the treadmill is just as hard on my feet as road running so this was great that I did it all bare and didn't ever have to put on my VFF.
So now back to regular life for the week and then off again on more nuun adventures.  This time its Cedar Rapids Iowa for the New Bohemian Half Marathon!   I am working on so many blog posts and feel really behind on my blog correspondence but I will get caught up.
Happy Running my friends!

Angie, you are absolutely amazingly wild.
The most I have ever done on a dreadmill was 12 and it was HARD. The boredom was unbearable and that was in a fancy gym with tons of TV programs to chose from.
Talk about determination. Didn't your feet feel hot? I find treadmill belts warm up too much after they run for a while.

Girl you are awesome! In a strange hotel, on a treadmill, middle of the night and you still bang out 26.2 barefoot miles. Awesome job!

Oh I love that movie...The secret lives...one. Oh Forest Gump is good too but I just watched the Secret lives...the whole way through for the first time and it is such a great story! Love it!

Impressive! Not an easy feat for sure- you deserve an award!
My inexpensive treadmill at home stops after 100 minutes. Just when I'm getting my groove in!

Congratulations, you are inspiration for me to get get some long barefoot runs in. My ego still isn't ready to race barefoot, but I for see at least a 50 mile barefoot training run by years end.

You should head back over to Omaha on Sept 26 for our marathon...there's a barefoot category this year!

You are freaking rediculous! In a good way! freaky...

You are so freaking amazing!! A marathon on a treadmill barefoot....you amaze me! :)

You are so ready for October. Once again, I'm amazed by your abilities.

You are awesome! I think it's much more mentally tough to run on a treadmill anyday and you did it all barefoot. You are going to rock your marathon!!!

There should be a medal for anyone who can handle staying on a treadmill for 26.2 miles. My mind goes crazy after about 10. Staying on for a marathon, barefoot? You're incredible.

I'm in awe! "I just felt like running", she says :) ...then she runs a marathon, barefoot, on the treadmill! You are an amazing woman!

Such a rockstar! Congrats!

OK and I have to just leave one more comment - My word verification for the last comment was "RUNNOW" Ironic?????? :)

you are amazing. Seriously!

Okay you stud. Amazing. I would have to shoot myself in the head on a treadmill by mile 15. Great job and discipline.

My God! You SHOULD get a medal! That is just unreal.... I could no more run that far on a treadmill than fly to the moon. Your mental fortitiude knows no bounds.

I could barely make 2 miles today on the 'mill. And you were in OMAHA?! Do you know how close I live to Omaha? :( sad day

I CANNOT believe you ran on it Barefoot!!!! double holy moly.

I CANNOT believe you did not die of boredom in the gym room on a TM for 4 hrs.
You hands down win the mental stamina award!!!

Very impressive.
Few questions for you....
1. Were the mirrors useful in watching your form?
2. Any pain after 26.2 miles? Knee, ankles, joints?

You are a CRAZY amazing rock-star.. A Marathon is tough enough, but a Marathon barefoot, solo on a treadmill, REALLY? Pretty sure you have alien or robot parts in there somewhere. I will be giving you a HUGE High five this week.

OMG - I can't believe you did this. That is truly amazing. I am trying to think of something else to say, but you have said it all yourself. Unreal.

That is amazing!! Great job!!

That is insanely impressive!

You are incredible!!! What a feat! I was blown away when I saw this on FB. CONGRATULATIONS on the major milestone and one serious training run!

WOW. That earns a hardcore award!

What do you eat during the run? I'm curious... maybe you can tell us during later post. Somehow I picture you eating an entire meal. 4.5 hours is a long time!

doesn't the treadmill explode after 100 minutes?

That is absolutely awesome!

(I have the camo skirt too, but mine is purple!)

awesome!
I giggled at the 100 min comment.
Mine did that and i was like wth?
Only i wasn't doing a marathon on the treadmill. i was attempting my first 5 miler. Oy. I was so slow then.
Great job!

I kinda guessed you were crazy, but I had no idea! Four hours on a treadmill? Insane. Your rock! I think I'm even more impressed by the fact you can talk on the phone and run at the same time.

Now I want to watch Secret life of bees...I read the book and loved it, but thought the movie would be ho hum.

Can't believe you said wood. :) 4 1/2 hours on on the treadmill? You deserve a marathon medal! I love the mill but that is incredible.

You are a crazy, crazy girl. I adore that about you. ;o)

Holy crap Angie B!!! This is so amazing to me. I'm totally inspired and even have a strange desire to try this some time myself. I love it.