This shoe is pure happy butter yellow sunshine on my feet!   The men's is like a good pea soup and I mean that in the most positive light of course.  I could tell from the beginning that they were huge improvements on the NB Roads that I tried out last.  It was not a positive review however I highlighted often that I had great hopes that the Zero's would be proof that the designers listened to what the wear testers and reviewers wanted and made the appropriate changes.  NB really scored big with the Minimus Zero.  They went in the less is more direction and it is a major improvement! 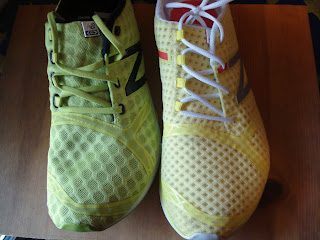 So the women's 10.5 is just a smidge too small (short) for me so I was sent the men's also to test out.  Although sizing is a pain in the ass for me as I am right in the middle, the upside is that I get to try the men's and the women's.  So there is a benefit to having Peggy Hill feet :)
I tested out the Merrell Pace and Trail gloves and was able to compare them so I was glad to do the same with the New Balance Minimus Zeros as well.
This helps for the ladies with not so narrow feet to decide if they need to go with the men's or women's.  If you get a chance though it's always best to try them on yourself since foot shapes are so incredibly different.

The men's is the green and women's the lovely happy yellow in the above photo.  I noticed that, as typically is the case, the men's is a bit wider however not much difference in the fit otherwise.  The lacing system allows for custom tightening and was not any difference from the men's to women's.   I have long skinny feet and my feet have spread out at the midfoot quite a bit since starting my barefoot journey over two years ago. 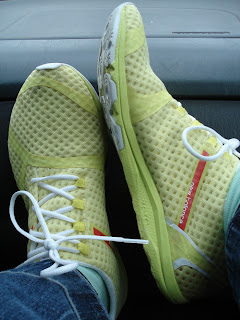 First taking them out of the box I notice how lite they are.  The women's (size 10.5)comes in at just shy of 5 1/2 ounces and the men's a bit more at 5 3/4 according to my kitchen scale that I weigh all the shoes I review on.
As well as being a Zero drop shoe, the stack height is also lower by several mm.  In the Zero's I don't feel like I am on stilts like I did in the previous model.  It's funny how even the slightest change in drop or stack height seems like a super pronounced change.

Pointy toes... These shoes look to be made to appeal to people who are used to wearing traditional trainers.  Fine with me.  I like the way they look.  These have a shape like trainers but surprisingly the point in the toe doesn't force the foot into the point.  The look is deceptive.  The toes are still allowed to splay naturally  and the mesh is stretchy to accommodate movement yet still hold its shape.  You could say they are wide in the toe box but people have different ideas as to what "wide" is so I think that saying that I was not restricted in my feet splaying and widening out at the point of my weight being put on them sums it up in more detail. 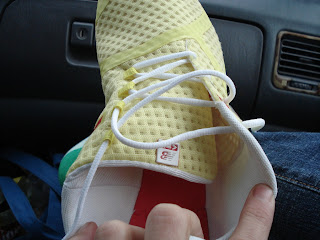 No need for socks as they have a smooth sock liner on the inside of the shoe.   Also no removable liner which is nice. This encourages you to wear these without socks which adds to the biofeedback (proprioception).  A removable liner may be beneficial with shoes like the vivobarefoot line where the sole is a denser material with next to no squish at all but for the Minimus Zero's there really is no need for a removable liner.


One of the highlights of this shoe is  the uber clever tongue design.  The mono-tongue is a part of the upper that wraps around for a smooth fit.  You can see it well in the above photo.  I have not had the tongue area slip around or become uncomfortable.    The tongue design reduced the amount of seams there are which means less rubbing on your bare foot. 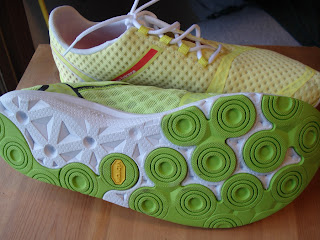 The sole is made from a Vibram material called R-Lite.  The large low lugs provide great traction and look like they can take a great deal of wear.  I would think, from the short time I have tried these out, that they would do well on most all surfaces.  If you are wanting to do trail running where there are significant hills or a technical terrain then go with shoe made specifically for that kind of terrain but for just about anything else these seem more than capable of giving a secure ride.   Vibrams is known for their quality sole materials and is used in many of the big name companies.

How about the ground feel?.....surprisingly it is not bad.  I am not as big of a fan of the squishy padding as it tends to give a false sense of security.  This means that you might be fooled into thinking that you can zone out and not pay attention to your form because the padding will keep you from injury.  Not the case with minimal shoes.  The less padding the more your foot will have to work for itself.  This is exactly what you want but just like with weight lifting you don't go into the gym and try doing 200 lb dead lifts and expect to be ok afterwards. You would more than likely pull and wrench something that was too weak to keep up with your minds expectations.  You build up to it slow and steady.

So, the padding is there but it is much much less that most any shoes out there.   The fact that it is so flexible and has adequate room for natural splay, is just as important.  There is pretty good ground feel and I can tell temperature differences and still feel and sense rocks, ect.  The Biofeedback you are able to tap into is pretty good in these shoes.   Any shoe will dampen the amount of biofeedback it's all a matter of degree. 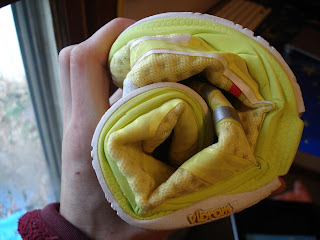 It passes the "roll it up into the ball test".  This test is fun visually but does show that the shoe is flexible which means it is going to be capable of moving with the foot instead of being stiff and rigid which would mean your foot would be confined and forced to move unnaturally which will in turn set you up for potential injury down the line.
So, to sum it up.....They make me happy!
You might be wondering what criteria to follow when choosing a minimal shoe. Here is a  list of what to look for in a great minimal shoe is compiled here.
Here is a NB link that talks about the uppers and how they were designed.  Spring 2012 is just around the corner.  Keep these in mind when looking for your spring season shoes!

Edited to add:   So in the middle of the night it occured to me that I had not said anything about the heel seat.....of course in the middle of the night I would have that thought!  The heel seat is very comfortable. In the previous NB Minimus Road it was very uncomfortable and the seam rubbed the back of my ankle.  It was quite stiff....The Zero's have NO ISSUES with this at all.  Problem fixed.  Well done NB!
I was also asked about breathability.  Fantastic breathability!  The mesh is great although I would think wearing a pair of wool socks in the deep winter months however if you keep moving your feet stay warm anyways.  Being mesh they do let the wind come through.  Which is great when you are hot but the feet cool off quickly and you don't want wet sweaty feet getting cold quickly.  A pair of woolies do the trick!

I can't wait to get those. I am currently wearing the NB MT10 Minimus Trail shoes. After the Honolulu Marathon (this weekend... yikes), I will start training in Altra Adams that I just purchased. The VFFs don't work for me with triathlons because they are tricky to put on in transition.

When the zero drop minimus comes out I will have to compare them to the Adams.

Thanks for the review.

Ok those look SWEET!!!! Told you I hated the minimus road.. Love to review these.

Hi Angie,
I was wondering how many miles the shoes would last you - or how many they did last you?
Thanks so much
Tom