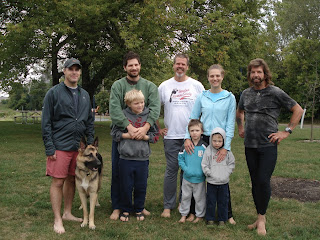 It was great to see everyone!   We got to meet Melissa, John's wife, as well as Nate's buddy Lambo.
Thanks Melissa for taking the group photo.
We met at Mullets and  all arrived in shoes.  John and Melissa were wearing the Altera Adam and Eves and Nate had some VFF Komodo's. 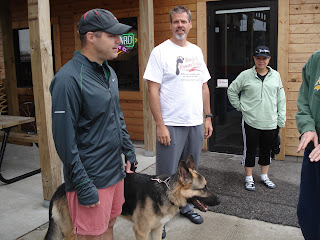 Once we headed out to run everyone let their feet be free!
It was rather chilly and was around 54-ish degrees.  Not too cold but enough to know that fall is here.  It was nice to not be beaten down by the sun. 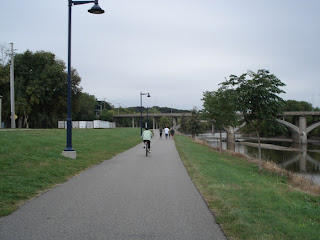 I brought Milo (5) along for the run to Grays Lake.  He went out really fast and furious in the beginning and did not want to pace himself with me so I let him run knowing that we would walk part of the way.  Indeed he got a nasty side stitch that he worked through and would walk a bit and then want to run some more. 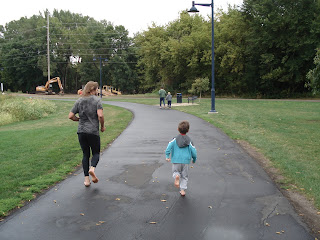 Milo really loved running and talking with everyone.  I could tell he liked being a part of something.  He ran and talked with Forey for a while.
Milo and Archimedes both have perfect and beautiful form.  You can see in the above photo that he is landing  right under his center of gravity and his heel is just kissing the ground.  His posture is straight up and down and he is so relaxed. Every thing looks to be moving just the way it should be. 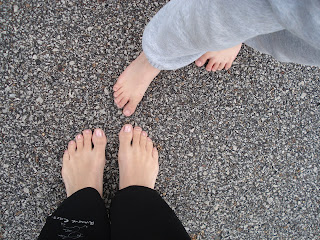 It had rained earlier and I am happy to report that neither myself nor any of the spawn suffered from running on wet surfaces.  Sometimes it can be a real issue if your form is not spot on.  How did everyone else fare on the wet? 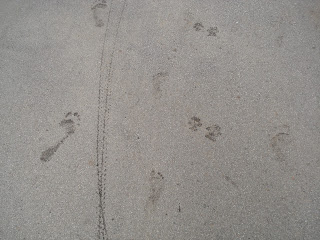 We were one big barefoot running family including the pooch!  My youngest son Archimedes went the 1.91 mile loop around the lake with Milo and I. 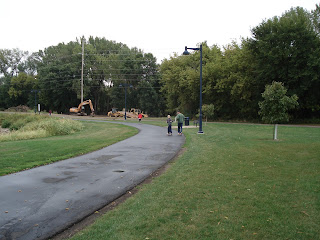 Even my son Jupiter, who has autism, is improving in his running.  I am a firm believer that the proprioceptive stimulation of running barefoot has a calming affect that I think he benefits from.  Still a theory but I like to see him start to run with better form instead of lumbering around and crashing about as he used to do.   Now that his immitation skills are improving he is getting so much better at running. His eagerness to participate was heartening as well.
So today the boys have sore calves from running and we had to explain that it was normal and that the more they practice the less the soreness will persist in future running.  They are already talking about next time they run!
Should we do another meetup next month??  Its getting cooler and could share minimal shoe solutions for winter.  John will be running the Des Moines Half Marathon and Forey is running the full so maybe a meetup for the races and support.  There is the full, half, and 5k. 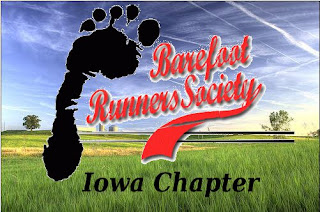 Also our member Evelia or Barefoot Dama as you would know her from online is running the Quad Cities marathon on the 25th!  GO DAMA!!
Go check out our facebook page as well as the BRS link at the top.
Please share with your Iowan and surrounding states friends please!
Iowa Barefoot Runners Society facebook page

So fun! And I love that the kids came along. Very cool to see what the barefooting may have in store for Jupiter. Cool stuff.

No problems with the wet pavement. Was great seeing you all again. I'm looking forward to the events in Des Moines next month!

Good morning, I am going to visit Iowa next month(sep. 2012) from Mexico, I run barefoot from time to time ,I'd like to know if there is any club, a group, of barefoot runners to run with when I am there thanks, my email is carloszzz@hotmail.com