Early Friday morning the whole family loaded up for a road trip to the Quad Cities.
The trip was a work trip for me and I was headed there to do a  Hy Vee nuun sampling and then work the Quad Cities Marathon expo and finish line activities for nuun.
Until this trip I have had a very difficult time transitioning from being away and alone and the stress that that presents and then coming home to be mom and wife again and the intensity that goes with it. The stress of the trip on top of not being able to sleep made for a couple days of recuperation when I came home and a feelings of being even farther behind and no desire to get anything done. Even running while out of town was not enough to take the edge off. 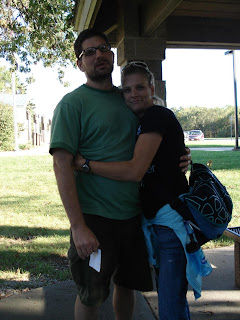 This latest trip to the QC however has been lovely and smooth.  I was able to sleep and my spirit was lifted when my spawn and hubby come to visit me during my 15 and 11 hour days Saturday and Sunday.  Even the drive was fun and went by much faster then being alone wanting desperately to be there already.

Jaymon has been to the Quad Cities to train at Pat Miletich's MMA gym and he has fought there several times as well so he is familiar with the area. He took the kids to lots of parks and when I would meet back up with them at the end of the day the boys were surprisingly mellow and happy even though they were thoroughly exhausted after so much running around and fun.   I was dubious about the trip thinking they would be stressful for me since I anticipated them to be uber cranky at the end of the day and I didn't think I would have the energy or patience to deal.
I will eat my humble pie with a side of crow and gladly admit that yet again I underestimated their stamina and adaptability.

I really enjoy doing grocery store nuun samplings. One of the perks of the job is getting to hand out single serves and bottles to the employees.  The people watching is always entertaining and I loved nuun before I got the job so its not like I have to fake being enthusiastic about it. Its nice to be able to grab some grub right there at the health market when I am ready to head out.


Oh but the best part is working at racing events! 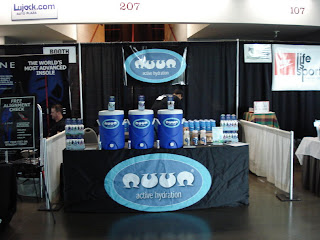 The dude in the picture at the booth next to us was pretty frustrated with my humble refusal to buy any of the alleged logic behind their Worlds Most Advanced Insole.  I avoided confrontation in favor of being professional but I could tell the fella did not like my barefoot running ways and my enthusiasm about it either.
He did not find the irony of his booth being next to a barefoot runner as humorous as I did and I think this pissed him off even more!  (snort)
The super nice guys at the Nike booth next to us on the other side did find it amusing and were fun to hang with.  Hello Jay if you read this!!
I was glad to learn that Dane Rauschenberg  is a nuun athlete!  He came over and introduced himself and told me this fabulous news!  He is a super runner and ran 52 marathons in 52 weekends and wrote a book about that adventure! He has a very full schedule that you can check out on his blog.  He was the speaker at the expo and was a pacer for the 3:10 group of marathoners at the race. He was so easy to chat with and friendly and I do hope that our running paths will cross again someday. Living History Farms Dane, Living History Farms! 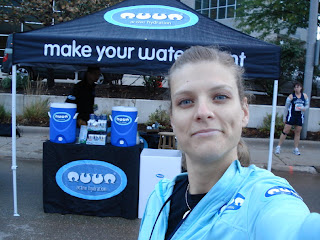 Here is a very sleepy Angie Bee on the morning of the race. Vishal (my fellow nuuner) and I met in the hotel lobby at 5:30 to start our day. A.m. people thats a.m!! Being this tired and excited for the day gives me the giggles and I was way beyond grumpy like I normally would be at this hour.
Vish informed me that he had a bit of a bridge phobia as we were driving over the mighty Mississippi to get to Moline from the hotel.  I couldn't help but laugh and point out that driving in the dark on a wet road with massive amounts of fog  over said scary bridge didn't help with the phobia much. Luckily he was beyond grumpy too although he seemed to speed up a bit to get over the bridge as he laughed. No Starbucks was spilled in this adventure by the way! 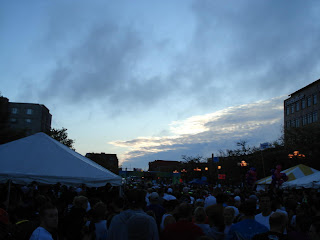 The energy at the beginning of a race is amazing!  It was perfect fall weather and everyones breath was visible in the air as the chatter was happy and lots of laughter was heard even at this ungodly hour.  Its always hard to NOT hang the proverbial "be back in 20 minutes sign" and run at least the 5k instead of wait for the runners to come back and hydrate at our nuun booth. 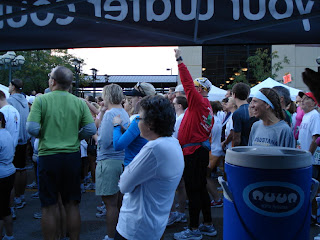 They had a cannon fire with a resounding boom as the race began.  Go runner go!! 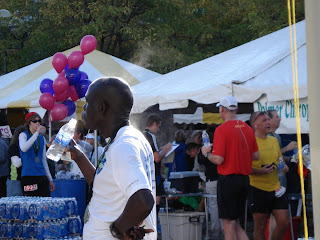 When finished they come and drop a nuun tablet in their water bottle like this guy.  He looks like he is on fire after a great race and the picture does not do the steam justice!
The race was a success all around and I head many stories of people doing far better than they imagined they would.  I met great people like Scott that worked and volunteered for the race right up until it was time to start.
After packing up at the end of the day and saying goodbye to the Quad Cities, the spawn, husband, and I all drove off into the sunset.  Seriously.  We headed west right into it but not before stopping at the Worlds Largest Truckstop for some grub.   We couldn't resist the lure of it and yeah, it was pretty big. 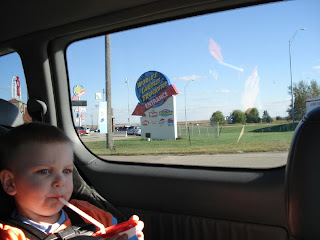 Traveling with kids means regular stops to run around and get the kinks out.  That actually is the only thing I was missing over the weekend was running.  My legs ached from being on my feet for so many hours and a run would have gotten my blood flowing and flushed out the lactic acid built up.
The trip home was probably the most fun of all. 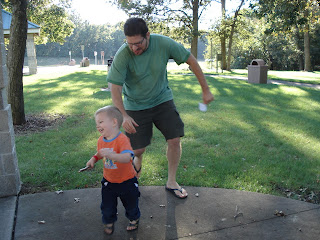 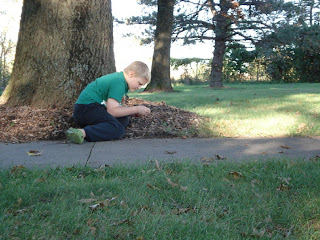 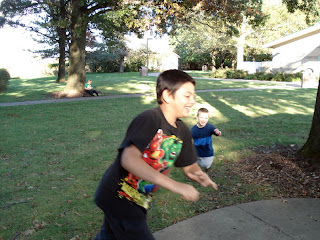 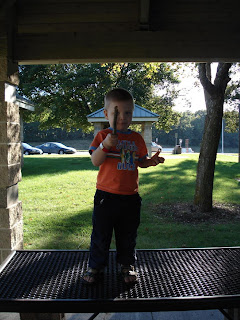 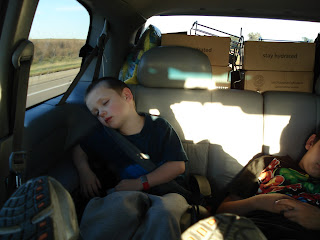 and sleep.  All is right in our world.
Now I sit blogging and filling out recap forms for work.  Catching up on social media happenigs that I missed over the weekend and planning to run in a few minutes.  I have to remember the sun is going down earlier these days.
Less than 3 weeks till my marathon and I am really excited for it.
I just met some very cool people over the weekend and will hopefully get to meet up with them at the marathon on the 17th. Out the door to get the blood pumping.
Happy Monday and run happy.

1. I really like that you're a nuun rep.
2. I think you should always park your table next to the insole people.
3. I haven't forgotten about the Squirrel With Hot Nuts, I'm just a little stuck on how to finish it. Has to be perfect, you know.

Ok, Angie - you are too cute! I love your pictures. So awesome!

And, I saw your comment on Dane R's blog...funny - he's going to be speaking and running in the Prairie Fire marathon in Wichita on 10/10/10 - this is my hometown marathon! So cool.

Have a great week!

okay, now your travel w/kid family adventures are inspiring me! the pics of your lil' dudes exhausted in the car...priceless. so cute.

glad you had your fam with you on this one;)

Sounds like a great weekend and so cool the family got to join you. That's the best! I would have a hard time too watching runners and not wanting to jump in :)

sounds like a full and fun weekend...nice that the fam could make the work trip with you...

You have a good gig! I think it's a great fit for you.

Woohoo--countdown is on to marathon day. I think you're going to love ever step of it.

I love your insole-guy interaction. Poor fella... I'm excited for you about your marathon!

I'm glad everything went so well on the weekend! So nice having the family along.

Very cool that the fam was able to come with!! If I can't get to the DSM marathon, this is the one that I'd love to do in Iowa.