Through the woods like a barbarian and the bathroom sink.

***CSN stores boasts over 200 sites including ones  that vend cookware, tools, and even a bathroom sink!***


This week has flown by and has not been a very pleasant one.  I have been fighting something off and it has left me tired all the time and I had some painful intestinal issues which led to anxiety and depression. My inner OCD and hypochondriac run rampant when I get sick.
Its amazing how life can be so wonderful and then out of nowhere some intestinal issues and maybe a fever and some heart palpitations and the proverbial rug seems to be pulled out from under a happy outlook.

I am on the mend and have been able to get in a very tough 21 miles this week, most of which have been on the paved bike trails with Sammy riding his scooter with me. I had to chick him yesterday just to make sure he still knows who is boss, for a little while longer anyways! Two of said 21 were on newly discovered single track trails.  I love trail running although today I discovered how my sense of direction might be pretty terrible. 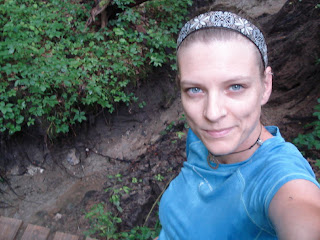 Notice the ginormous blood sucker on my arm. Better to keep moving!
I can't really get lost on these trails. They are pretty much in the middle of Des Moines but it felt like being miles from anyone.  It was pouring rain as well so I got a great first opportunity to try out the Vibrams Five Finger KSO Treks.  I was sent a pair from Vibrams to test out and I am still in the testing phase but so far I am really enjoying them.  I like the feeling of my toes being separated and the traction was better than I imagined it would be.  Thanks to my friend Brooks for loaning me the Injini toe socks. They were quite comfortable and kept me from getting any blisters.(I am not sure I would have gotten any blisters since the VFF seem to fit me well but I needed to test out the socks too.) Thanks Brooks! 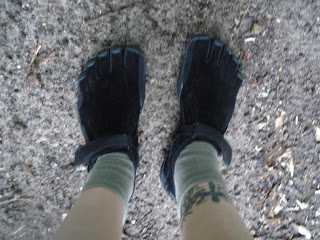 I have had the intention of running on the Center trails for months and have never just gone out and done it.
The saying that "not all who wander are lost" was a favorite today as the joy of bounding through the forest was punctuated with the fear of circling for hours and not being able to find the trail head again. 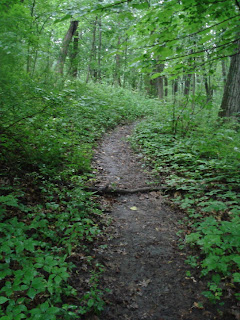 I had no idea where I was going when I set out.I stood at the trail head and then started to run. I knew it looped around and had many side shoots and it was a relatively safe trail to just start running without a clue as to where I was headed.  It is well maintained and I was impressed with and grateful for the work that the CITA has put into it. 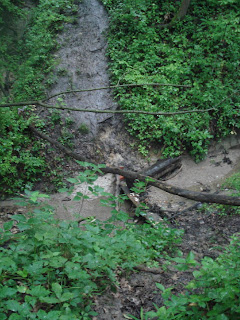 Next time I will transverse this area but today with such a little amount of time available I chose to turn back. It was one of the side shoot trails which seemed so inviting! Reminds me of the Living History Farms XC race in the fall!  This is great practice ground for this years race!
Maybe running in a washed out gully isn't such a good idea when its pouring down rain anyways.
Luckily and strangely there was a water polo match with boisterous spectators going on at the pool that shares the parking lot with the trail head so I was able to move towards the sound when I thought that I had been gone way too long and needed to get home. It was perfect timing since the other 95% of the time I was out there it was just the sound of the rain and a cuss or two from me running into effin spider webs.

Uber excitement for the next time I run this trail. It seemed to be pretty barefoot friendly. Some roots but not much for sharp or scary looking obstacles!
I am not done with my testing of the Treks so this is just a mini assessment and I am proud of myself for getting out there alone to run like a barbarian in the woods. If I was really in the wilderness, I would so need some GPS!

I am behind on my reviews and giveaways and this week I hope to catch up a bit.  I was contacted by CSN stores to do a giveaway which will tie in nicely to that Foodie Friday that I missed this week and hope to keep up with since there are so many other gluten free people out there. CSN stores boasts over 200 sites including ones  that vend cookware, tools, and even a bathroom sink!
I have won a couple of giveaways to CSN stores and bought my cute apron and also won a bake ware set. More on that giveaway later this week.

For now happy running and hope everyone has had a fantastic weekend!
Congrats to all those who raced including my brother who ran his first 50k trail race!! 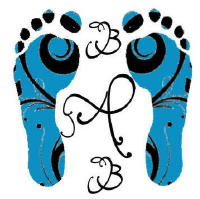 Glad you are feeling better...sick sucks!

Congrats to your brother for doing his first trail 50k!

Glad to hear you are feeling better! I have been thinking about trying the VFF - I'm in the middle of reading Born to Run - and that McDougal guy has got me thinking!!!!

yah, i want those trails!

Sorry to hear you had a crappy week, well done and getting out and hitting those trails, they look beautiful, you have a wonderful place to run.
Glad your liking the vibrams.
Happy running.
P.S I ran part of a 10k race, at least two miles of it bare footed, felt great, thanks for the inspiration.

Love exploring new trails on mountain bike or by running. It brings a totally different peace over me. I hope this week is a better one for you. Those V5F's are way cool looking. Can't wait to see how they are as you do a few more runs in them.

Sorry to hear about the crummy week - glad you are on the mend!

It took me awhile to get used to wearing the VFFs and I did get a few blisters. But once I started using Injinji socks - good life!

WOO HOO adventure! I have a terrible sense of direction too. I told Bill that I was going to do this epic trail run up and down the other side of this mountain and he correctly stated that I would get lost. I may need to someday get over my technophobia and get a GPS..

I love me some trails! I have to wear socks with my VFF's but mine is more of a chafing issue from the seaming. I love those trails that you get to jump over stuff like logs and go through water. I always feel a little bit like I'm a super-hero!

Sorry you had a bad week! I get the same exact way so hopefully everything is on the mend.

Angie, I do hope you are feeling well again soon! Just have to say that while I have come to adore barefoot running, the big drawback in my mind is finding trails I can run on that aren't coverd in little rocks. Could you have run on those trails just in the bares (without Vibrams)?

Sounds like you had a good week recoverying for your ick-ness. The trail looks beautiful minus the blood suckers.

There was a runner wearing Vibrams for my trail race. I talked with him but thought of you.